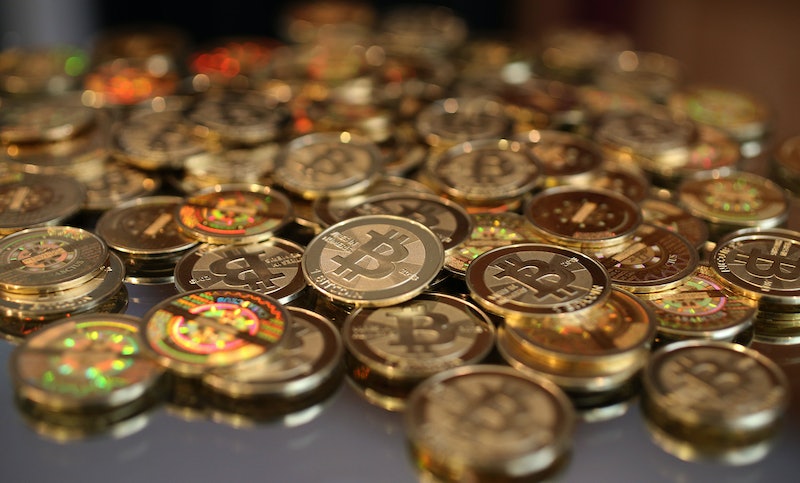 Being a star player in a high-profile FBI drugs bust isn't most people's claim to fame, but Bitcoin is making it work. On Oct. 2, Web-based black market Silk Road was sensationally shut down in an FBI raid, and some analysts expected that the Bitcoin currency, most of which had been used to buy and sell drugs on the site, would sink with it. Not so fast: In four weeks, Bitcoin has been taken under the wing of Canada and China, leapt upwards in value, and made a Norwegian man a casual $886,000 after he invested $27 in the currency in 2009. Now freed from its association with heroin, crack cocaine, and more black-market drugs than we even know the names of, it's looking like Bitcoin is here to stay.

In Vancouver, a trendy coffee hotspot has just installed a Bitcoin ATM, into which you can pay cash and receive bitcoins. Right now, one bitcoin is worth just over $200, and at the ATM, you can buy $1,000 worth of bitcoins per day. So, what could you do with them? Well, you could just sit and wait: Norweigan man Kristoffer Koch purchased $26 worth of bitcoins back in 2009, having stumbled across the currency during his thesis on encryption. In April this year, he was reminded of his investment when he stumbled across a news piece about the bitcoin — and discovered that his 5,000 shares were now worth $886,000. And in China, where there are few good investments to be seen right now, a good chunk of the country's investors — and it's China, so that's a lot of people — have been hedging their bets on Bitcoin. China's version of Google, Baidu, even accepts Bitcoin as a form of payment.

But let's take a step back: what exactly is Bitcoin, again?

Well, it's been described as "the Internet applied to currency." Bitcoin isn't controlled by the central banks, meaning that it’s only a currency amongst those who believe in its value. (Sort of like fairies.) For Silk Road, Bitcoin appealed because it was very nearly impossible to track down those who were trading it online. Each bitcoin could be identified via open-sourced numbers, but it was almost impossible to link said numbers up to real, living people.

Here's the problem: Bitcoin masquerades as a currency, but it can't really function as one. In April, Bitcoin was being traded at a high of $266 apiece — but a few weeks later, its value crashed to $50. In a single day in October, Bitcoin fluctuated by $30, meaning that it should be seen as an investment rather than a currency. For economic stability, currencies need to remain infinitely more stable than Bitcoin will probably ever be. The yen and the euro, for example, only fluctuate by fractions of percentage points. It's a nice idea to think that a decentralized, open-sourced currency like Bitcoin could function in today's economy, but that nice idea would also probably plunge everybody into economic destitution. So let's not go there.

So, should you invest in Bitcoin? It's a risky investment, but no longer a radical one: the Winklevoss twins, who you'll remember as being dramatized as the world's most entitled people in The Social Network, are two of Bitcoin's biggest investors. They believe that it'll be the next major currency — the evolution of the Internet writ large, if you like. And with the phenomenal gains that Bitcoin's made since it escaped from the clutches of Silk Road, you could do a lot worse.