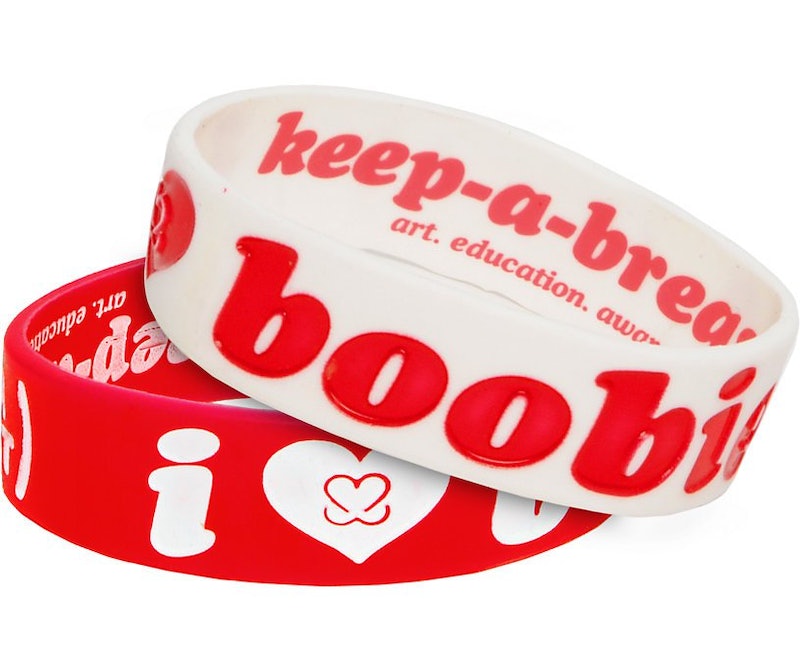 There's a new fight moving towards the Supreme Court... and it centers around a band that reads: "I ♥ Boobies!" (Seriously — let's take a moment to imagine Supreme Court justices having to say that over and over. OK, glad we did that.) Now let's get serious: The Easton Area School District in Pennsylvania voted 7-1 Tuesday to take its attempt to ban awareness-promoting bracelets to the Supreme Court. Um, why? The bracelets' slogan, intended to promote Breast Cancer Awareness Month — "I ♥ Boobies," just to say it again — is lewd and disruptive, according to district officials.

The fight over the bracelets has been going on for three years, after two girls challenged their school's ban on them back in 2010. A lower court determined the bracelets were fine, and an appeal was upheld by a court of appeals last August. Now, school district superintendent John Reinhart has protested, insisting that administrators should get to decide what is and isn't appropriate inside schools.

The school district has another problem with the whole "I ♥ Boobies" thing: Their disagreement with the bracelet has less to do with the bracelet, and more to do with the implicit sexual connotation behind them. It's fine to raise awareness about breast cancer, the district's vote implies, so long as the women don't actually mention the body part we're trying to protect from said cancer (again, that would be boobies, if you forgot). Clearly, outside of cancer, breasts/boobies/ta-tas could only be sexual — not an anatomical feature that all women biologically share.

The case raises other important questions besides a school's right to enforce a dress code — questions the Supreme Court could probably never answer. For example, at what age is it acceptable for girls to acknowledge parts of their bodies, to own them, and to advocate for them? And at what age is it okay for guys who go to their school to acknowledge that, hey, they're also aware that the things making lumps under girls shirts aren't socks? And that sometimes these not-socks get cancer, and that's a sad thing we should be working to prevent?

In any case, this case is on to the next court for the school district, which voted 7-1 to have another go in the justice system. The only dissident voter, Frank Pintabone, aka the Voice Of Reason, said that the district should just let the matter go already, thanks.

More like this
Chris Kaba's Family Continue Fight For Justice After Viewing Police Bodycam Footage
By Sophie McEvoy
Black History Month UK’s 2022 Theme Calls For Action, Not Words
By Maxine Harrison
Mel B Speaks Out Against Domestic Violence In A Powerful Speech
By Sophie McEvoy
How To Politely Reject Someone Who Keeps Asking You Out
By Laken Howard and Lexi Inks
Get Even More From Bustle — Sign Up For The Newsletter