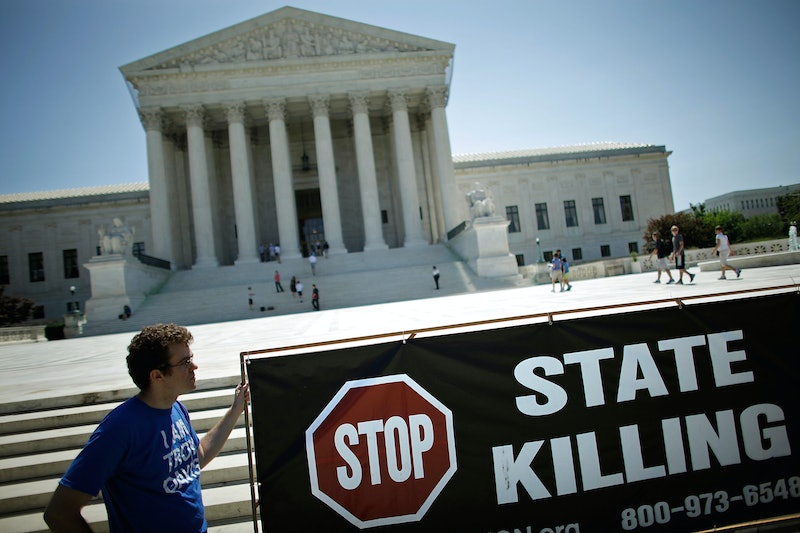 The poll’s question asks participants about support for the death penalty for individuals convicted of murder. Gallup actually began asking the question in 1936, when public support for the penalty was at 59 percent. It rose slightly until the 1950s, when it began a downward trend that culminated with an all-time low approval rating of 42 percent in 1966. In that year, disapproval of the death penalty was actually higher than approval, with 47 percent saying they were opposed — the only time in the poll’s history that such results were recorded. Not surprisingly, there are also differences across party lines: Republicans tend to favor the practice more heavily than Democrats do.

It’s not clear why public approval of the death penalty has fallen, but it may be linked to several high-profile executions over the past few years. The 2011 execution of Troy Davis incited protests around the country, with many believing that there were still serious doubts as to his guilt. Davis had been convicted of killing a police officer. In August, Florida executed a mentally ill man, despite the fact that such executions are prohibited under U.S. law. John Ferguson was schizophrenic, and “believed that he was the immortal prince of God vested with superhuman powers including an ability to control the sun.”

On top of that, companies that produced the drugs typically used for lethal injections — the execution method of choice in the United States — are increasingly nixing the use of those drugs for executions. As we reported on Monday, an Ohio prison is set to use a new cocktail for a Nov. 14 execution after the makers of pentobarbital, the typically-used drug, declared it “off-limits” for use in executions. The manufacturer, Danish firm Lundbeck Inc., wasn’t the first to do so.

And then, of course, there’s the specter of executing an innocent man. Many death row inmates are exonerated every year — particularly black inmates, who are disproportionate victims of the death penalty. At least four innocent men have been exonerated after being executed in the United States. Perhaps the most famous and heart-wrenching case was that of Cameron Todd Willingham, who was convicted of burning his three young children alive in his home. Willingham was the subject of a long New Yorker piece by the incomparable David Grann, who painstakingly recreated the fire. Grann’s investigation — published in the magazine 18 years after Willingham’s execution — found that the conviction was faulty, and Willingham was an innocent man.

It’s also worth noting that the United States is increasingly out of step with comparable countries when it comes to the death penalty. According to a report released in April by Amnesty International, the United States was the only country in the Americas to execute someone in 2012. In Europe and Central Asia, the only country to use the death penalty in 2012 was Belarus. Japan and the United States were the only G8 members to execute people in 2012, and only 19 of the 193 countries that are members of the United Nations carried out executions in 2012. When it comes to the rate of executions, the U.S. joins the ranks of Somalia, South Sudan, Iraq, Saudi Arabia, and Belarus — hardly nations we tend to claim to emulate.

The Gallup Poll dismisses the possibility that the U.S. is likely to abolish the death penalty. The Supreme Court had temporarily banned it in the 1972 case of Furman v Georgia on technical grounds, but it has since been reinstated. Now, only 18 states ban the death penalty in the U.S., and 3,108 people are currently on death row, awaiting their executions.