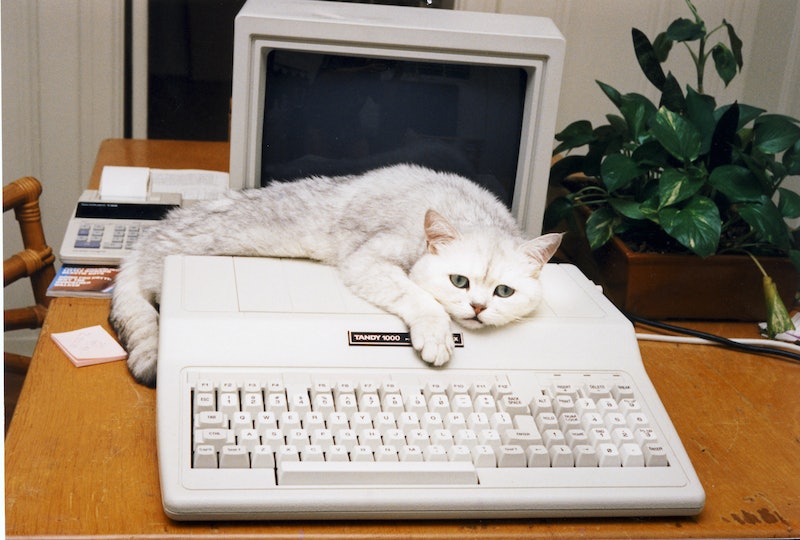 Technology has giveth, and technology has taken away. Given: Seamless takeout and Facebook stalking; a video of a cat dressed up as a shark chasing a duck on a vacuum cleaner; and a successful healthcare exchange website ... oh, wait, scratch that last one. In the "con" section of your gadgets, they might just be putting you at risk of a whole host of new "illnesses." You can't have iOS 7 without a bit of motion sickness, a laptop without the risk of thigh burn, or a cell phone without "phantom-vibration syndrome." Here's your definitive Luddite-hypochondriac list of what technology puts you at risk for...

Your ears simply weren't designed to handle the amount of noise your iPhone earbuds send into them. Harvard research indicates that we're using earphones about 15 hours a week. The ear can only handle a finite amount of noise in its lifetime — if you use up your "noise quota," your hearing will likely begin to fail sooner.

For example, one children's ear specialist told TIME: "If you're using the earbuds that come with an iPod, and you turn the volume up to about 90% of maximum, and you listen a total of two hours a day, five days a week, our best estimates are that the people who have more sensitive ears will develop a rather significant degree of hearing loss."

Before iOS 7, people prone to motion sickness didn't have much of a problem, unless they were trying to text and drive. (In which case, their fault.) But the first edition of Apple's rebuilt iOS 7 included fast-motion animations for icons and alerts, and a whole lot of new users reported all the effects of motion sickness: nausea, dizziness, headaches, and even vomiting. Worse, iOS 7 was the first Apple operating system that you couldn't revert back to the previous version, meaning users were stuck with it.

Very quickly, a shame-faced Apple introduced an update that allowed people to turn off the animations.

Short for "no-mobile-phone phobia," nomophobia is exactly what it sounds like: a phobia of losing, breaking, or otherwise being out of touch with your cell phone. A UK research group found that roughly one in two people suffer from nomophobia, with men 10 percent more likely to develop it. It's been compared to "wedding-day jitters," or anxiety before a trip to the dentist — nerve-wracking, but not a serious condition. Which makes it pretty plausible. Still weird, though.

Nope, this isn't what develops after you've spent half the day on BuzzFeed. Basically, Wi-Fi uses the same kind of rays that cell phones do, and Wi-Fi is everywhere — which might be a problem. Research on Wi-Fi sensitivity is scarce, but regions that went wireless overnight saw multiple reports of symptoms apparently caused by Wi-Fi overload: headaches, itching, insomnia, fatigue, and difficulty concentrating.

A few hypotheses have been put forward: that most of the complaints might be hypochondria; that some people are just more sensitive to those kind of rays; or, that stress can worsen your Wi-Fi sensitivity. Bottom line, nobody's really sure. Happy Internet-ing, guys!

If your laptop sits on your lap while you're working or watching TV, you too could become a victim of "thigh burn" — which is exactly what it sounds like, except there's nil chance of a tan. The base of some laptops can hit 125 degrees, and if it's sitting on your thighs for hours, you can wind up with anything from a rash to severe discoloration, though both are usually short-term. Usually.

Okay, that's not quite as apocalyptic as it sounds. Inside the hippocampus area of your brain, there's an area focused specifically on directions, so that your caveman ancestors didn't get lost while hunting and gathering. Thanks to technology, we're not using that part of our brain anymore: there's GPS on your phone, in your car, and on your iPad — it's an industry in itself. But there's a problem: if you stop practicing finding your way, that area of your brain shrinks and becomes less and less capable, meaning that your future great-grandkids won't be able to figure out how to get from their bedrooms to the bathroom. OK, we're speculating here.

Yup, our generation is haunted... by a phantom, ringing cell phone that just won't quit. (The syndrome is also known as "ringxiety," "hypovibrochondria," and "fauxcellarm." Really.) It can take the form of either phantom ringing or phantom vibrating. You're more likely to experience, so-called symptoms when "taking a shower, watching television, or using a noisy device," but it can strike anytime. Research suggests that "phantom ringing" affects almost three-quarters of cell phone users, and can be worsened by stress.

Sleep disorders are becoming increasingly common: 50-70 million Americans suffer from chronic sleep problems, and four percent of the adult population regularly pop sleeping pills. Technology interferes with sleep in a couple of different ways: for one, screen brightness convinces the brain that it's daylight, and thus not time to fall asleep. This is particularly important in the crucial hour before sleep, in which your brain needs a relaxing, screen-free environment to wind down in before passing out.

Most American adults sleep with their cell phones within reaching distance, and some don't turn their phones off — this makes it hard to drift off, as your subconscious is constantly half-waiting for your phone to go off. Even with your cell phone on silent, knowing that it could be laden with phone calls and messages you haven't received makes it pretty hard to relax. Plus, technology makes it possible for anyone you know to drunk-dial you at 3 a.m., which really doesn't help matters.