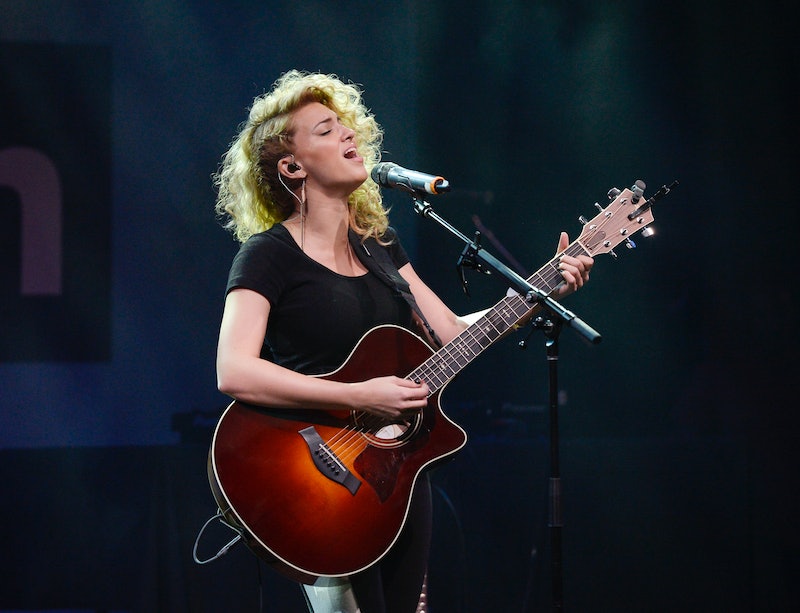 By now, you've probably heard of Tori Kelly. Her debut album, Unbreakable Smile, is due out this summer, and her oh-so-catchy single, "Nobody Love" has most certainly been stuck in your head these past few weeks. So what makes her any different than all the other pop star powerhouses out there today? To try and definitively answer such a question on the brink of her very first album release would prove a bit ridiculous, not to mention just plain unfair.

However, it is fair to say that Kelly has certainly begun to carve out a niche all her own, particularly when it comes to personal style. A Southern California native, Tori Kelly sets herself apart from the pop stars of late through her unabashed embrace of casual SoCal style.

Almost all pop stars of late seem to lean towards the ultra-glam, with bold makeup, colorful hair, over-the-top manicures, and the like. Now, of course, all the glamour proves pretty fun to look at, to get inspired by, to escape into for a few seconds — it's the entertainment industry, after all — but it's also quite refreshing to see Tori Kelly embrace a more natural, down-to-earth look. Obviously, as with every young woman, Kelly's look is bound to evolve and quite possibly change entirely — but that doesn't mean her current style isn't worth celebrating.

Every pop star has a trademark. For Ariana Grande, it's a constant high pony; for Taylor Swift, it's an omnipresent bold lip; for Tori Kelly, it's her head of blonde curls. Considering we live in a world dominated by sleek, straight styles, Kelly's style serves as a much-needed marker of curly haired beauty. Alongside some recent curl-positive advertisements like Dove's "Love Your Curls" campaign, Kelly's curly mane provides perfect example that curls can set you above and beyond the rest when it comes to acing a killer signature hairstyle. That's not to say she hasn't struggled with a bit of curly-haired confidence before. Speaking to Glamour.com, Kelly had the following to say about embracing her unique look:

"When I was younger, I was insecure about it and didn't know how to manage it, so I would straighten it all the time. It was in the sixth grade that I thought, both of my parents had curly hair, so I must have had hair curly hair too. My mom then taught me a few tricks to work with my hair and I've been full-blown curly since."

Of course, like anyone with straight hair who occasionally reaches for the curling iron, Tori Kelly isn't immune to yearning for a bit of change. In the same interview, she goes on to say that she tends toward a straight look for days when she "[wants to] feel like somebody else." But even so, just the sheer fact that Kelly declares wearing straight hair as something outside herself only furthers her curly icon status. Curly hair is Tori Kelly, and that's pretty cool.

As with her naturally curly hair, Tori Kelly also seems to embrace a more natural look when it comes to beauty. Again, it's always fun to see celebrities done up to the point of something almost avant-garde on the red carpet or even just in a selfie on Instagram. But, for most people living and working outside of the entertainment industry, chances are that glossing on layers of makeup or dying hair bright purple or green aren't really viable options, for both practical (how many workplaces allow pastel pink hair?) and monetary (makeup and hair upkeep can be expensive!) reasons. Moreover, sometimes, with the constant barrage of images featuring perfect hair and dramatic makeup, all of it tends to get a bit old after a while.

Enter Tori Kelly. Unlike many of her peers, Kelly opts for makeup that just works. That is to say, she goes for a subtle style that accentuates a natural beauty without going over-the-top, one that is not only inspiring, but attainable. Her Insta is full of nude lips, smoky eyes, and a simple bronzed face; looks that most definitely add a bit pop to her personal style, but which also seem easy (and practical) enough to replicate. It's always cool to see the extreme stage and red carpet looks of pop stars, but it's also nice to see one with makeup styles that translate perfectly into regular-people life.

Taking into account Kelly's embrace of her naturally curly hair and her more subtle makeup looks, her California-cool personal style really proves the only logical thing to follow. One of the greatest things about Kelly is her unapologetic attitude towards those that try and change who she is — be it Simon Cowell or the people she's talking about in the title track off of Unbreakable Smile — and her personal style is clearly part of that.

Rather than make a turn for the super-luxe just to fit in, Kelly rocks laid back looks with a perfect dose of singer-songwriter swagger. Like any good SoCal girl, Kelly knows how to rock a pair of ripped jeans and a lose-fitted tee, and like any stylish celebrity, she knows how to glam it up on the red carpet. Mixing the two, she creates a style all her own, one that most definitely separates her from the pop star pack.

More like this
Beyoncé Wore A Golden Sheer Gown At Her VIP Dubai Concert
By Sam Ramsden
Pamela Anderson's Most Iconic Makeup & Hairstyle Moments
By Olivia Rose Rushing
9 Valentine's Day Hairstyles For 2023 That Look So Dreamy
By Audrey Noble
Blake Lively Debuts Red Hair For The 'It Ends With Us' Film Adaptation
By Olivia Rose Rushing
Get Even More From Bustle — Sign Up For The Newsletter
From hair trends to relationship advice, our daily newsletter has everything you need to sound like a person who’s on TikTok, even if you aren’t.