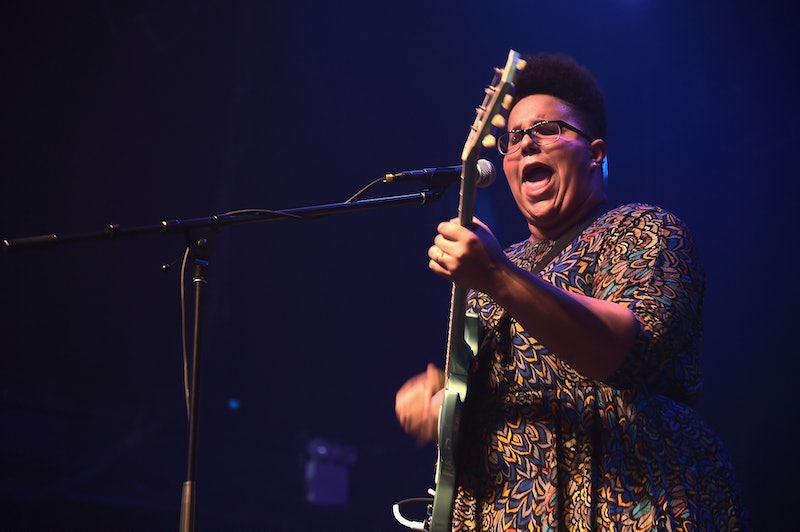 By now, you should know about Brittany Howard of Alabama Shakes. Through a mix of blues, jazz, Americana, and straight up rock-and-roll, the group has established itself as one of the coolest American bands of the moment. Maybe you've heard the song "Hold On," or maybe you saw them perform at Coachella or on Saturday Night Live (where they've already taken the stage twice). Whatever the case, Alabama Shakes has certainly made itself easy to love, with two albums full of soulful, refreshingly unique songs that will stay stuck in your head for days.

Undoubtedly, all of this is in large part due to their super cool front woman Brittany Howard, though. Alongside fellow Athens, Alabama native Zac Crockell, Howard founded the band in 2009 while both of them were still in high school.

From there, the rest is pretty much history: The critical and commercial success of their debut album, Boys & Girls, performing with Jack White and Neil Young, and a killer sophomore album, Sound & Color released just this month.

Through it all, Howard, a former U.S. Postal Service employee, has consistently rocked out on stage, exuding a confidence and sheer, undeniable coolness that only comes with being the lead singer (and guitarist) of one of the most exciting bands around. Her style is something to envy, something to get inspired by — and it's about time to acknowledge the reasons why:

Brittany Howard is not your conventional source of fashion inspiration, but that's exactly what makes her just so cool. She defies any assumptions about what it means to be a rock star. To begin, she's a woman of color. (A little fun fact I discovered writing this article: word processing recognizes the term "frontman" but not "frontwoman.") And what's more, when asked about her intersectional identity within the context of the industry, like in this 2013 BET.com interview, she expertly answered with the following:

"I don't think it's odd. I think it's cool people like it. Because, shoot, people used to do it all the time. This is where rock and roll came from: Chuck Berry, Memphis Minnie — it used to happen all the time. It's still happening. All along, there's all these talented people, women, men, Black, white — we just got lucky. "

Secondly, when she performs, she feels the music in a way so infectious, you can't help but feel the music, too — and there's something undeniably refreshing about that. All too often, the only images of women in music prove exclusively those of done-up pop stars, which is certainly fun — everyone loves to escape into those glamorized worlds of professional makeup, hair, and styling — but not always the most inspiring. Enter Brittany Howard, who appears onstage as nothing but herself, demonstrating that confidence belongs to even the most unconventional of rock stars.

It's always inspiring when someone is proud of where they came from and clearly, Brittany Howard is proud of her Southern roots. From her band's name to the outlined tattoo on her arm, the influence of Athens, Alabama isn't lost on her.

Rather than ditch country style for something more metropolitan, Howard embraces her natural personal style in a characteristically unassuming way. Her look is casual-cool without even trying, a style that comes from nothing but just dressing in what works without worrying about other trends.

For Howard, this means muted colors and vintage prints, button-up sundresses, and denim accents, statement jewelry, and bold, rouge lipsticks, all chosen not because Howard's going for a certain "look," but rather because that's what comes natural to a woman born, raised, and still living in Alabama.

In sum, all of this really just leads to the theory that Brittany Howard is fearless, therefore providing a great source of fashion inspiration regardless of your personal style. She takes fashion risks in the coolest ways possible, pushing the limits of her usual looks to the extreme without forgoing a trademark sense of subtlety.

Take, for example, the bold-printed A-line dress with shoulder cutouts that she wore onstage at Coachella 2015. On paper, a dress so muddled doesn't seem like it should work — or rather, that it should work exclusively for those aforementioned pop stars accustomed to over-the-top looks — but it does, adding to the performance and amping up Howard's on stage swagger to an even higher level without taking a degree of attention away from the music itself.

And this is important, because Howard undoubtedly utilizes music as her primary form of creative expression, but her fearless sense of fashion doesn't fall too far behind. Her style doesn't strive to catch attention, but much like the Alabama Shakes' music, it most certainly does. She manages to perfectly capture what it means to have a "personal style" in a way so unassuming, or rather so unconventional, that it makes her undeniable coolness even cooler, even more of an inspiration.

More like this
Harry Styles Brought Nipples & Sequins To The Grammys
By El Hunt
Beyoncé Wore A Golden Sheer Gown At Her VIP Dubai Concert
By Sam Ramsden
All Of 2023's Biggest Nail Art Trends, According To Top Manicurists
By Jordan Murray
'Love Island's Will Got A Farm Animal Manicure & It's *Adorable*
By Sam Ramsden
Get Even More From Bustle — Sign Up For The Newsletter
From hair trends to relationship advice, our daily newsletter has everything you need to sound like a person who’s on TikTok, even if you aren’t.