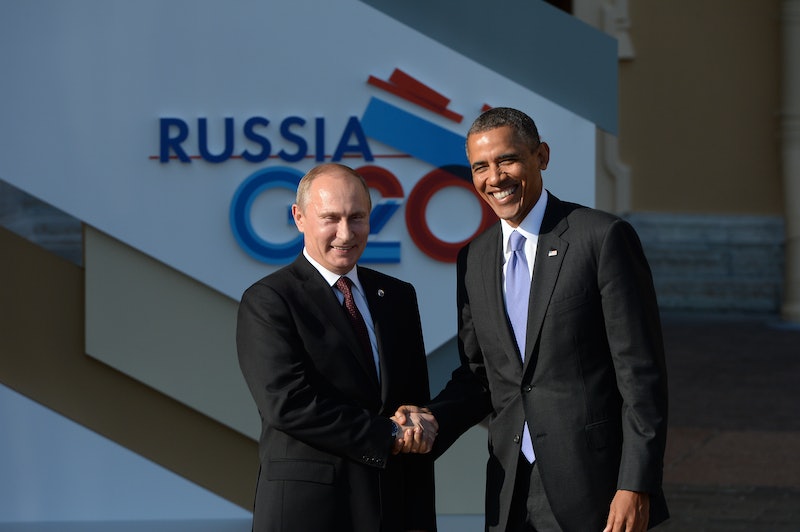 National Security Agency analysts aren’t the only ones listening in: Vladimir Putin’s cronies apparently tried to bug phones of leaders attending the G20 summit in St. Petersburg last month. Italian newspapers La Stampa and Corriere della Sera broke the story on Tuesday, reporting that world leaders were given gift bags with phone charges and USB thumb drives emblazoned with a “Russia G20” logo. European Union President Herman Van Rompuy reportedly thought the gifts were a bit strange, and sent them to technical experts to get checked out. That’s when German tech analysts discovered that the chargers could access any form of communication made from the phone.

Calls were quickly placed to all affected leaders to warn them about the Russian booby trap. But the timing of the incident was especially poor: If you’ll recall, Obama was upset that Putin offered asylum to Edward Snowden, the root cause of Obama’s many international embarrassments of late.

According to the Italian papers, the duplicitous gift bags were given to all delegates at the September event — as many as 300 people. Certainly, this whole incident seems very Cold War-y. At least when America spies on world leaders, we hide our tracks well enough that you wouldn’t know about it were it not for a rogue NSA contractor. This whole incident seems almost passive-aggressive, and not very tech-savvy at that.

Of course, Russia denies that any hanky-panky took place at the summit. “This is undoubtedly nothing but an attempt to shift the focus from issues that truly exist in relations between European capitals and Washington to unsubstantiated, non-existent issues,” said Kremlin spokesman Dmitry Peskov. Let’s hope spying seems as insignificant to Russia’s leaders when Ed Snowden tells us exactly what the U.S. did to them.

A lesson for the future, folks: If you’re ever given a free thumb drive or phone charger with a red-and-blue logo on it, don’t use it. Just to be safe.