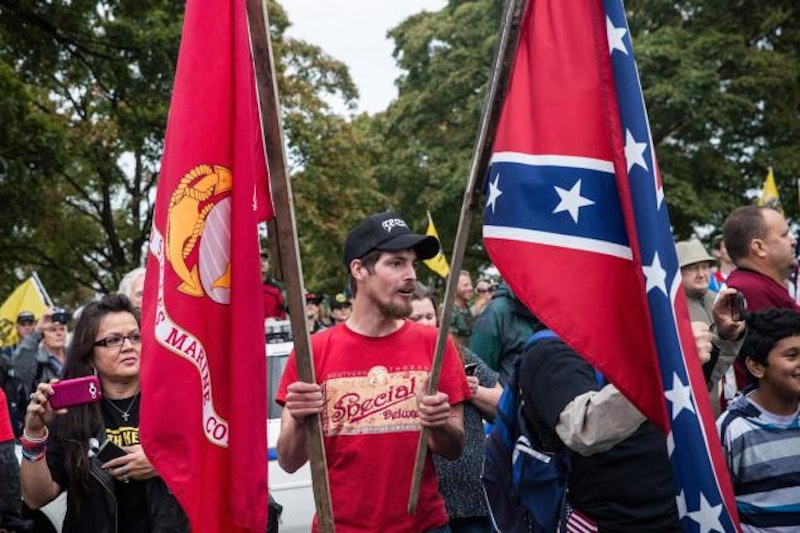 A Republican pollster and former advisor to both Presidents Bush says that if the GOP wants to succeed as a political party, it’ll have to do two things. One, allow immigration reform to pass, and two, stop pandering to racists. Race has, of course, long been an anchor of the GOP’s electoral strategy; if you doubt this, listen to legendary Republican strategist Lee Atwater’s meticulous instructions on how to pander to racism without sounding racist. But it’s rare for Republicans to acknowledge that they still do this, and equally rare for them to bluntly tell their fellow partisans to cut it out.

There’s certainly ample evidence of racial pandering, to put it as lightly as possible, amongst GOP officials. This is often most obvious at the local level — see here, here, here, here, here, and, most recently, here — but it pops up on the national stage as well. Recall Newt Gingrich calling Spanish “the language of the ghetto,” Rand Paul’s opposition to the Civil Rights Act, former Mississippi Governor Haley Barbour’s kind words about 1970s-era white supremacy, or Virginia Governor Bob McDonnell’s insistence that slavery wasn’t a significant aspect of the Civil War.

If Republican politicians are guilty of pandering to racists, that would mean they perceive their base to be racist, and an exhaustive analysis of the GOP released earlier this month lends some credence to this perception. The report — which is incredibly thorough and very much worth checking out — sought to delineate the various factions that comprise the modern-day Republican Party, and found that the largest bloc, evangelical Christians, is deeply xenophobic:

Social issues are central for Evangelicals and they feel a deep sense of cultural and political loss. They believe their towns, communities, and schools are suffering from a deep “culture rot” that has invaded from the outside. The central focus here is homosexuality, but also the decline of homogenous small towns.

Furthermore, the study suggested that the Republican base as a whole is, uhh, adverse to racial minorities.

And while few explicitly talk about Obama in racial terms, the base supporters are very conscious of being white in a country with growing minorities. Their party is losing to a Democratic Party of big government whose goal is to expand programs that mainly benefit minorities. Race remains very much alive in the politics of the Republican Party.

The inescapable fact, one that Steeper undoubtedly had on his mind when he offered his suggestions for the party, is that the GOP’s share of the minority vote is dwindling to anemic levels. Latinos voted for President Obama by an incredible 44-point margin last year. In the African American community, 93 percent of voters went for Obama, as did 73 percent of Asians.

Is this because voters perceive the party as racist? Or because the party’s policy platform — particularly its opposition to Obamacare, support for voter ID laws, and opposition to immigration reform — is largely unpopular with minorities? It’s probably a combination of the two. Considering that whites will make up a minority of the U.S. population by 2043, Republicans are going to have make significant changes to both their political rhetoric and their policy prescriptions if they want to survive as a party.

“We should have two parties based on a different approach to the role of government,” Steeper said. “I don’t want our parties to be representing racial groups.”