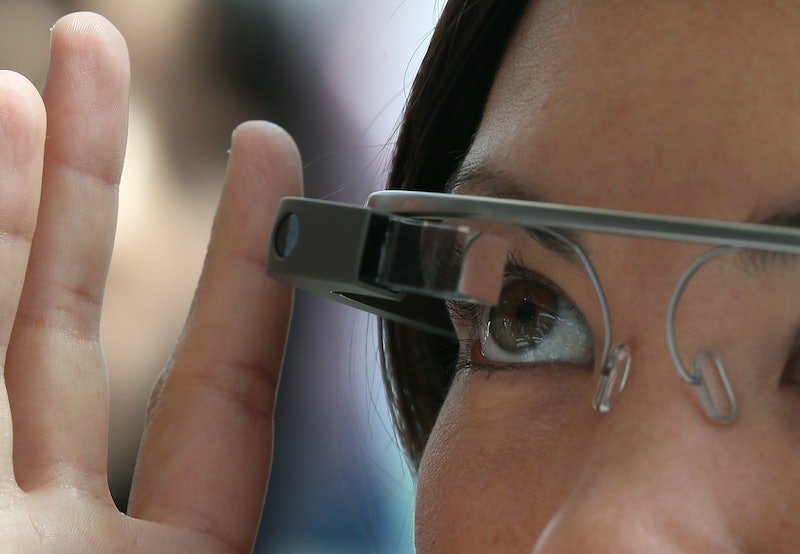 In 2014, we'll finally get to meet the long-awaited, much-hyped Google Glasses — and a string of privacy, safety, and social concerns with it. In a sneak preview Wednesday of just one of those potential issues, a driver in Temecula, Cali. was pulled over for speeding, handed a ticket, and scolded for wearing Google Glasses. The ticket, according to a photograph Cecilia Abadie posted (ironically) on Google +, reads: "Driving with Monitor visible to Driver (Google Glass)." Abadie, who works for a golf course and describes herself as a "Google Glass pioneer," posted: "Is #GoogleGlass ilegal [sic] while driving or is this cop wrong???"

Short answer: Google Glass is a bit of a gray area, legally, but in the state of California it is illegal to drive while watching an animated screen. Abadie rightly points out that most of the world, including cops, don't really understand how Google Glasses work — since, according to Abadie, her screen was turned off as she drove. "I was wearing it because I do wear it all day, but I was not using it," she clarified later to press. "The fact that you're wearing it even if the device is turned on doesn't mean that you're watching it or using it actively."

Google Glass has received a mixed response, with lawmakers labeling it a dangerous breach of privacy and safety. The glasses are able to record and/or photograph everything you see at the touch of a button, or from a voice command (you know, because there aren't enough angry debates about surveillance going on at the moment) and has fueled concern about recording people without their consent.

There's also the "distraction" element — drivers and construction workers, for example, would be distracted from the (dangerous) job at hand if they wore the glasses at work. West Virginia State Rep., Gary G. Howell, has already introduced legislation that would preemptively ban Google Glass-ing, and the United Kingdom is considering doing the same.

The problem is that, as Abadie discovered Wednesday, it's very difficult to tell whether the glasses are set to "on" or "off." If someone's supervisor came over to tell them to turn the glasses off, for example, the person could theoretically turn it off via whispered voice command before their boss got there. Once Google Glasses come to town, corporations will have to examine the rules for their employees — will Google Glasses be prohibited at work? And, if so, could that be considered a breach of freedoms?

Another major concern facing Google Glasses is the social element. It's an antisocial device by nature, because the user is watching the screen rather than the people and landscape around them. It effectively cuts you off from people, which is another reason employers might ban them from the workplace.

Google, for their part, doesn't seem concerned. Google is apparently building a floating store in San Francisco to house their brand-new Google Glasses. Because what about this product isn't weird at this point?

More like this
Here's How To Get Your iPhone To Update Automatically Forever
By Emma Carey
20 Smart Devices Under $35 That’ll Change The Entire Vibe Of Your Home
By Emma Carey
30 Clever Ways To Slide Into Your Crush's DMs
By Griffin Wynne, Carolyn Steber and Lexi Inks
Everything To Know About 'The Last Of Us' TV Adaptation
By Sophie McEvoy and Radhika Menon
Get Even More From Bustle — Sign Up For The Newsletter