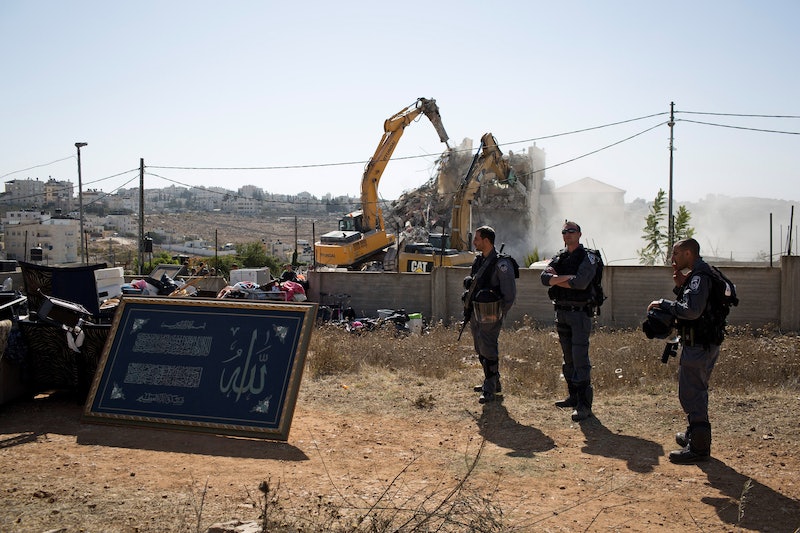 This can't be good news for the Israeli-Palestine peace process. Israeli soldiers killed a 22-year-old Palestinian civilian Wednesday in Qabatya, a village in the West Bank. The man, Ahman Tazazaa, was killed instantly when the bullet went in through his chest and straight out his back, after he and about 50 other Palestinians formed a roadblock and began throwing rocks at Israeli soldiers. The soldiers were in town to arrest Palestinian suspects.

A statement from Palestinian President Mahmoud Abbas called the killing "cold-blooded," adding that "This assassination coincides with an increase in the rhythm of settlement expansion, which is illegal according to the international law."

The news comes in stark contrast to the gains almost made yesterday, when Israel freed 26 Palestinian prisoners in a deal pushed by the U.S. — a second-stage concession to Palestine's stance that there wouldn't be peace talks until political prisoners are free. The first push, back in August, released another 26 prisoners — and several more waves are yet to come, with a total of 104 prisoners eventually up for release.

Peace talks between Israel and Palestine have formally been on hold since 2008, although secret talks between the Israeli and Palistinian administrations were held at the White House in July. Secretary of State John Kerry is in charge of setting the talks up — when he's not swamped with Syrian negotiation arrangements.

A short while after the prisoner release, however, Israel announced plans to start building 1,500 settlers' homes in an occupied area of East Jerusalem — a move the Palestinian Authority has decried as "destroying the peace process." (Rumors also flew that Abbas had allowed the building in exchange for the release of the prisoners — which was quickly denied by Palestine.) Now, the settlement push seems to be a way for Israel to quiet down some domestic upset over the release of the Palestinian prisoners, who many Israelis view as terrorists.

Israel's plan "destroys the peace process and is a message to the international community that Israel is a country that does not respect international law," spokesman for Abbas, Nabil Abu Rudeina, said.

Tensions escalated further today after Israel also detained seven Palestinians near Jerusalem following a raid of several homes near the village of Al-Isawiya.

Israel is also accused of destroying a Syrian air base late last night in a missile strike from the sea, following Syrian and Lebanese media reports speculating the country was to blame. Israeli jets were also noticed in Syrian airspace earlier in the day. There hasn't yet been an official comment from Israel on the matter, but the country has been accused of attacking Syria in January and May as well.