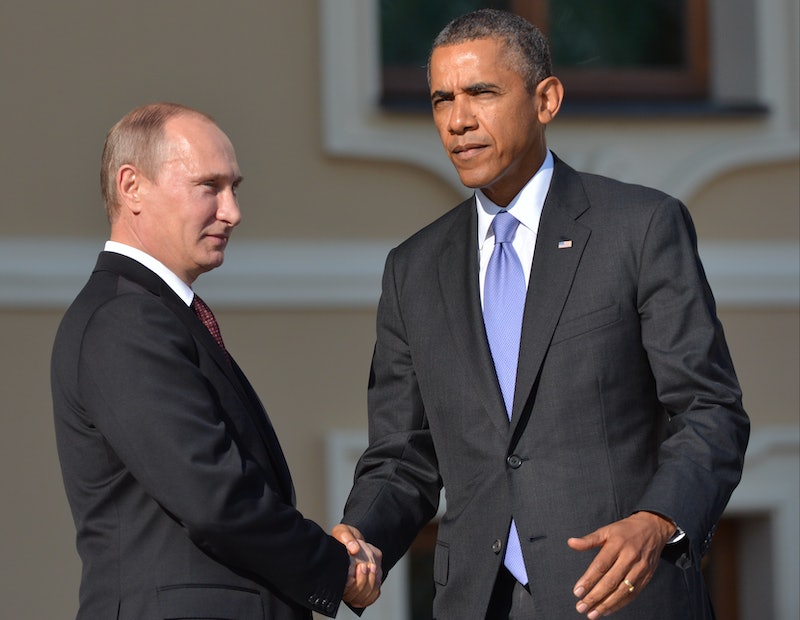 Mirror, mirror, on the wall, who's the most powerful of them all? According to Forbes' annual "World's Most Powerful People" list, the top position goes to Russian President Vladimir Putin, who knocked President Barack Obama down a notch from last year's list to the the second spot. Immediately, there was criticism over the choice, with the Guardian's Seumas Milne writing that "the likes of Forbes are delighted to have the chance to brand Obama a lame duck."

But Forbes Chairman and Editor-in-Chief Steve Forbes writes there are two main points that critics are missing:

One is confusing the power of the U.S. with the power of our President. ... Our survey was a ranking of people, not countries or companies. The second and far bigger point is that Barack Obama is weak internationally by choice. At home he’s amassing immense, unprecedented powers over the economy.

Forbes goes on to label the president as the "weakest" president since World War II, saying that Obama "just shows up" at international conferences. "The President truly believes the U.S. has been a malignant force in the world and therefore wants to reduce our footprint on the world stage to something the size of Belgium’s or Albania’s, which is why Britain and France took the lead on Libya and the U.S. "led from behind," Forbes writes.

But what's the real reason Putin was ranked as the most powerful person in the world? Could it have something to do with his penchant for riding horses bare-chested?

Forbes used three factors to come up with the rankings: "the number of people they control, the amount of money they control and the spheres of influence they control."

Xi Jinping, the general secretary of powerhouse China's Communist Party, was ranked third on the list. Pope Francis, who lets kids play pretend Pope on his chair — made his debut on the list at number four.

At the number five spot, German Chancellor Angela Merkel is the highest-ranking woman on the list. (Though she's probably a little busy being angry at Obama for the recent allegations that the U.S. hacked into her phone.)

Bill Gates —who is still the wealthiest man in the U.S. — made it to the number six slot for his work with the Bill and Melinda Gates Foundation, and Federal Reserve Chairman Ben Bernanke ranks behind him.

Other notable female newcomers to the list include IBM CEO Virginia Rometty at #56 and U.S. Federal Reserve Vice Chairman Janet Yellen at No. 72. There are only nine women in the 72-person list, with Brazilian President Dilma Rousseff rounding out the top 20, and New York Times Executive Editor Jill Abramson taking the 68th spot.

The youngest members of the list couldn't be more different — unless Mark Zuckerberg owns a small country or has a strange obsession with Dennis Rodman that we're unaware of: 29-year-old Facebook CEO Mark Zuckerberg is No. 24, and 30-year-old North Korea Supreme Leader Kim Jong-un is No. 46 on the list.

Don't worry. If you didn't make the list this time, there's always next year.