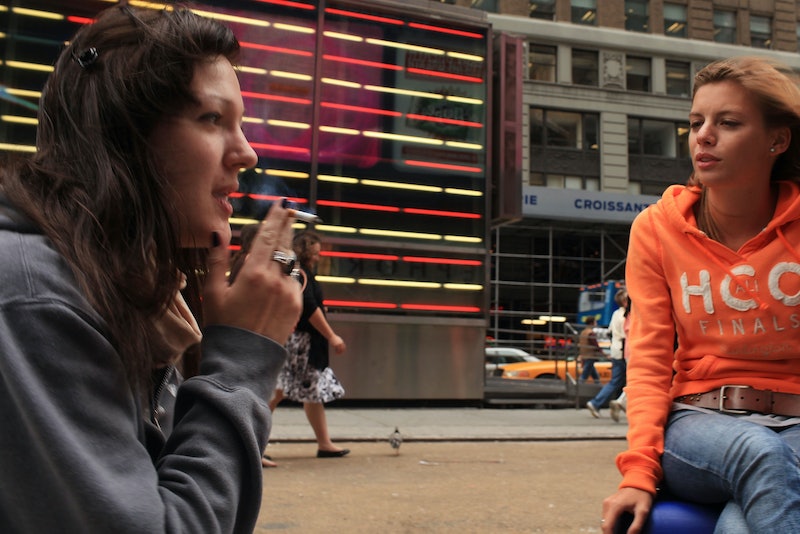 We predict a surge in fake IDs. The New York City Council voted Wednesday to raise the minimum age for buying cigarettes from 18 to 21. The decision makes New York City the latest — and largest — of a number of cities that have already enacted such a law. Under the new restriction, which Mayor Michael Bloomberg has unsurprisingly promised to sign, 18 to 20-year-olds will no longer be allowed to buy cigarettes or even e-cigarettes. The new rule was passed alongside another bill, which will raise the price of cigarettes to at least $10.50 a pack.

Now, there are many reforms in New York that I'm thankful for. I'm thankful that when I walk into Starbucks, the calorie count next to the price tag of that asiago bagel makes me think twice before buying it. I'm thankful that we sell liquor all day on Sundays. And I'm thankful that, as a smoke-o-phobe, I can go into any bar or restaurant and not be forced to inhale other people's secondhand fumes.

Still, it seems that banning 18 year olds from smoking is a misplaced priority. Sure, other cities and states have done it: the age to purchase tobacco is 19 in Alabama, Alaska, New Jersey, and Utah. New Jersey is considering raising the age to 21, and a number of counties around the country have already done the same. It’s all the rage now, in our newly health-conscious, “Let’s Move,” post-Obama America. But while raising the age to 19 might be somewhat logical (minimize the number of high school students who can buy for themselves and their classmates) raising the age to 21 doesn’t make much sense at all.

We've all heard the typical arguments before: at 18, a person can drive, can go to war, and vote to kick you off the city council. (Oh right — young people don't vote.) At 18, Americans can have sex with whichever adult they want — even ones with dangerous histories. But now, in New York City anyway, they can't buy a cigarette. Since we're winding down two wars, it seems appropriate to ask: will the city council really tell a 20-year-old veteran with PTSD that she can't buy a smoke?

In some senses, all of our laws restricted by age are fairly arbitrary: the human brain doesn't fully mature until 25, but no one would imagine saddling parents with legal responsibility for 20-somethings (economic responsibility, on the other hand...). So instead we set boundaries: 18 to make your own medical decisions, 21 to drink. These restrictions make some sense. The extra three years we make people wait for their liquor rights hopefully make their brains mature so they’re less of a danger to others. After a few drinks, a person must have the self-control to not get behind the wheel of a car and put other people's lives at risk. After a few cigarettes, you're not posing the same danger to others.

By all means, tax cigarettes up the wazoo. Make them quasi-impossible to buy. We have a right to tax products that negatively affect our way of life, and unless smokers are smoking in some alternate air field not connected to our own, their microscopic particles are ruining the air for all of us.

But don’t fall into the nanny state temptation, like city council speaker Christine Quinn did. “This is literally legislation that will save lives,” she said. Cigarettes aren’t like trans fats: they don’t sneak into commonly consumed goods. People who buy cigarettes are fully aware of what they’re doing. Our anti-smoking education has not failed; teenagers know the risks. And you know what? If they choose to keep doing it, maybe that's their decision to make as adults.

In case you've forgotten, dear legislators, air pollution is also a leading cause of cancer. While we're in the business of banning things, let's make all of Manhattan a pedestrian-only zone. And one more idea — here's a foolproof way to cut down on young people smoking tobacco: legalize weed.