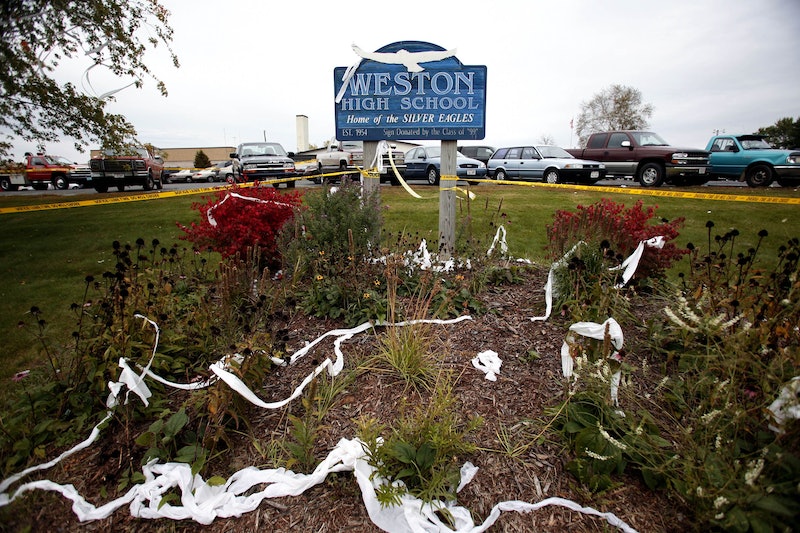 A group of high schoolers in Estill Springs, Tenn., were doing that thing high schoolers do: TPing, or the very carefully crafted art of launching toilet paper through trees and bushes of an intended target — in this case, their high school principal. But the joke turned sour pretty quickly when one of the 15 students was shot in the act. Twice.

But it didn't come from the principal: The 20-gauge shotgun was fired by his 65-year-old neighbor, Dale Farris. The shot spray got the teen in the foot, knee, palm, side and torso.

"He got peppered pretty good," the sheriff's office spokesman said.

Farris was woken up by his wife when she saw the teenagers taking off across a field. Police later stopped the kids when they got reports of a truck with lots of teens getting out outside of a house. One of the teens said he'd been shot by pellets but wasn't bleeding, and his parents would take care of the wound, thanks.

Moments later, police went over to Farris neighborhood, where calls had come in of shots being fired nearby. They found him sitting on his front porch, and he told them he'd seen the teens and fired two shots from his shotgun.

Faris was arrested and taken into custody on charges of aggravated assault and reckless endangerment, which could lead to some grown-up detention. Although he's currently free on a $125,000 bond, his court date's set for Dec. 5.

"The problem is they were not on his [Farris'] property and they were not doing anything to his property," the spokesman said. "It was just a random thing."

The principal, probably sensing that the teens had gotten their comeuppance, didn't press charges.