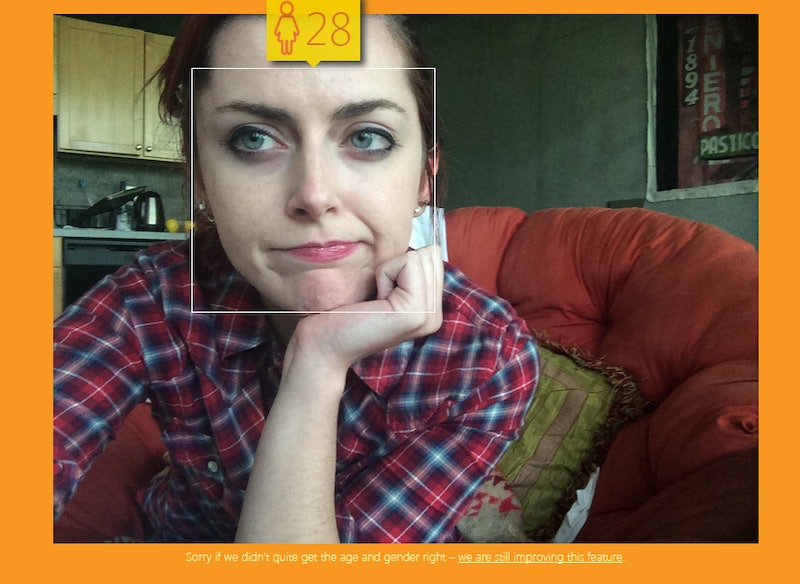 It's an age-old question whose response is dreaded by, well, pretty much everyone, because you never know what the right answer is going to be — How old do I look? When you're a teenager, every time a forgetful relative asks if you're in college is an excuse to preen for at least a week, because ohmygod, like, you're just really mature for your age and it's about time someone recognized it. Sometime in your twenties, however, that begins to change. Getting carded used to be a nuisance (especially if your ID was acquired through questionable means), but you start internally celebrating every time a bouncer looks at you askance. By the time you hit middle age, the subject is pretty much off limits. In the immortal words of my mother, "Jesus Christ, Claire, will you stop making me feel old?"

Still, we all jump at the chance to have someone guess our age, even if it means taking a blow to our ego. (I think it's because our vanity is outweighed by how much people love proving each other wrong.) That's why the scientists behind Microsoft's age-guessing robot might have been astonished at the popularity of their little experiment, but I most definitely was not. According to The Verge, it's basically a computer-driven version of one of those "guess-your-age" carnival games, and its creators expected "perhaps 50 users" to try it out. Instead, they watched in shock as the website saw more than 35,000 visitors within hours, most of whom were from Turkey after it hit Twitter over there. The game nigh-instantaneously guesses your age and gender, The Verge reports. It's not exactly new technology, so why is it popular?

Yep, that would do it. Although it gets things right sometimes, Microsoft's little age robot doesn't always hit the nail on the head. As you can imagine, this has had some hilarious results.

This is the internet, so of course people have upped the ante by forcing the generator to identify increasingly weird subjects.

Really, IHOP? Really?Because I make no secret of being just as vain as any of you, if not more so, I had to try the generator myself. All my life, I've been told I have a young face. I graduated college last year, but I still get asked which universities I'm applying to in the fall. Everyone else may be getting wildly inaccurate results from the generator, but surely I would remain immune. At worst, the little robot thinks I'm 18 or something, and my ego is satisfied for another day.You can probably see where this is going.

<img alt="joel mchale animated GIF " src="http://media.giphy.com/media/m8eIbBdkJK7Go/giphy.gif" class="article-body-image"/>For my first photo, I just decided to use my profile picture for work. It's a few hair color changes ago, but other than that it's a pretty good representation of my face. (For the record, I'm 22.)

Haha, I thought. It thinks I'm in my mid-twenties. How cute! I could have contented myself with this, but no. I was determined to get this robot to think I'm a teenager. So I decided to take a current of myself using my webcam. Surely that would clear things up.

Twenty-seven? Excuse me?? It must be the lighting. I took another picture from a different angle, but only slightly different, because I was too lazy to get up.

WHAT. Maybe the Microsoft bot needed another person in the photo with me, as a reference. Surely I don't actually look like I'm 28. So I roused my roommate from her nap, because some things are more important than sleep.

YOU WIN, Microsoft bot. I'm pretty sure the generator was just punishing me at this point, so I gave up before it could tell me I look like a 65-year-old ex-smoker. If you feel like tempting fate, however, you can try it yourself.