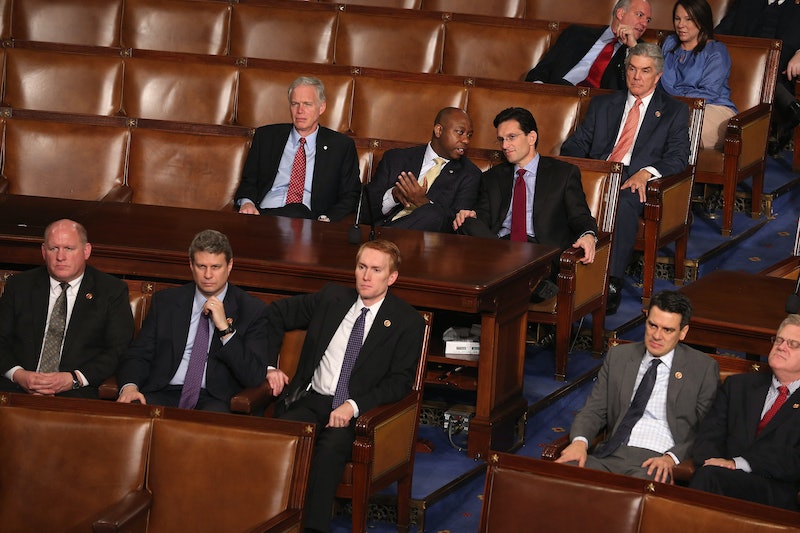 Overall, 43 percent of Americans polled say more women in Congress is positive — 49 percent of women and 36 percent of men.

C'mon. These numbers are dismal, folks. Seventy-five percent of GOP women don't think it's important for their own party to elect more women to represent their beliefs? How is that even possible? And only a smidge less than two-thirds of men polled don't think more women in Congress would be a good thing? Thanks for the support, guys.

As Amanda Marcotte over at Slate writes:

... apparently the ordinary Republican voter hasn't gotten the message. They better start getting it, particularly if the GOP is going to continue its principled attacks on women's rights. It's one thing to have a core mission of getting rid of abortion and contraception. But these days, the optics of a bunch of grumpy old men trying to do so is even worse. If Republicans can at least scatter a few more women in brightly colored suits among the "grey-faced men with $2 haircuts" (thank you, Tina Fey), they will have to make liberals work a little harder and use more words to explain why the policies are misogynist. Right now, all liberals need to do is show some pictures and point.

Ladies and gentlemen, allow Ron Burgundy to express our bewilderment over this entire situation:

This information, of course, does nothing to amend the GOP's image problem among women and minorities. Since the party's plan to stall Obamacare during the shutdown backfired, just 24 percent of Americans support the GOP, according to poll numbers at the beginning of October. Along with Rep. Paul Ryan's "conscience clause" crusade and Sen. Ted Cruz saying that Obamacare forces nuns to hand out abortion pills, the GOP could probably use a few clearheaded ladies to keep 'em in line.

Since 1964, women have made up the majority of voters in presidential elections, according to The Daily Beast.

"To win in 2016, the GOP must show itself capable of addressing things that affect day-to-day life, which has been proven to appeal to female voters, as well as the Democratic Party," Lloyd Green writes. "Otherwise it should expect to wander in the wilderness in the coming years."