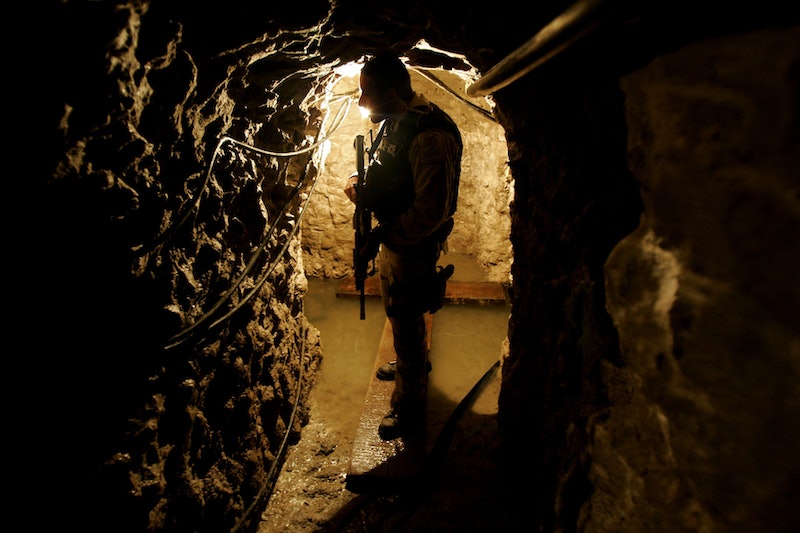 If you happen to be a drug smuggler, today is a particularly sad day: Before anyone even had the chance to utilize a huge, brand-new tunnel to transport drugs into the United States, it was shut down by authorities Thursday. The tunnel ran underground from Tijuana, Mexico, into San Diego, Calif., according to U.S. Immigration and Customs Enforcement. In the tunnel, authorities found and seized eight tons of marijuana and 325 pounds of cocaine.

Newly completed, the tunnel even had lights and a rail transportation system. The San Diego Tunnel Task Force, including members of ICE, the U.S. Customs and Border Protection, and the Drug Enforcement Administration, made the discovery; the tunnel connected to San Diego's Otay Mesa area, which is a popular site to dig because of its soft soil and many warehouses. Mexico's Sinaloa cartel in particular controls the border area.

Since 2008, authorities have uncovered more than 75 tunnels, largely used to transport marijuana into the country, according to CBS News. Some of the largest have spanned up to 700 yards. In one of the biggest pot busts in U.S. history, 32 tons of marijuana was netted in a 600-yard tunnel in November 2011. And a 700-yard underpass that began in a Tijuana kitchen was discovered in November 2010, yielding a 22-ton pot seizure.

The many tunnels puzzle authorities, who don't understand how engineers are able to construct the tunnels so precisely without GPS devices, which don't work underground. Still, authorities believe that it's probably the same guys: "If you have an engineer who's building you really good tunnels, you'll protect that commodity," Tim Durst, the assistant special agent for Immigration and Customs Enforcement, told the Wall Street Journal. "It's the most important commodity you have."

Tunnels like Thursday's in San Diego take roughly nine moths to build, and cost about $1 million. Like we said: bad day for smugglers...