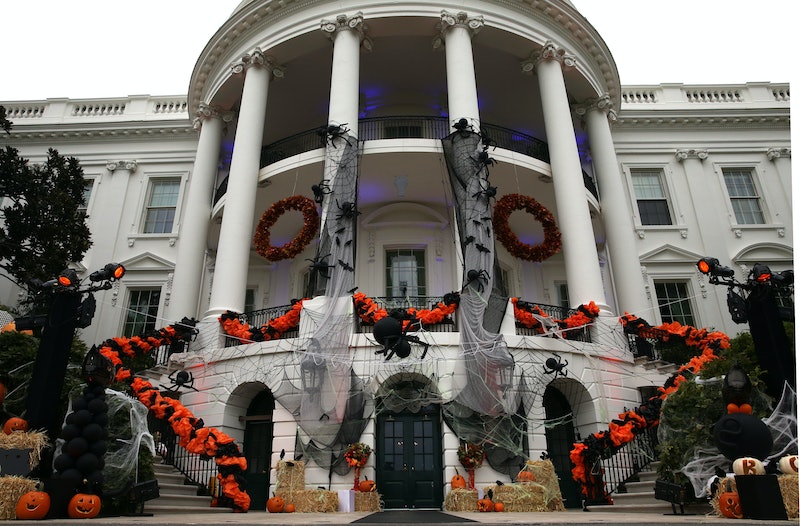 Halloween isn't just for kids! Plenty of adults join the festivities, and that includes our elected officials in Washington D.C. If they decide to dress up tonight, we've got some fitting last-minute costumes for 'em.

Unlike most supernatural creatures, the werewolf stays under the radar most of the time, then emerges bombastically without warning to stoke fear into the hearts of unsuspecting citizens. After keeping a relatively low profile for the last couple of years, Palin recently burst back onto the political scene, hitting the road for failed Republican Senate candidate Steve Lonagen, launching a criticism of President Obama on Fox News that was about as intelligible as the frenzied garbling of a werewolf on the prowl, and hinting that she might run for the Senate in Alaska. Like a werewolf, she’ll likely retreat back into hiding soon, perhaps after she’s unleashed her new book about the War on Christmas.

"Amidst the fragility of this politically correct era, it is imperative that we stand up for our beliefs before the element of faith in a glorious and traditional holiday like Christmas is marginalized and ignored," Palin said in a statement released through her publisher. "This will be a fun, festive, thought provoking book, which will encourage all to see what is possible when we unite in defense of our faith and ignore the politically correct Scrooges who would rather take Christ out of Christmas."

In many senses, the Tea Party died some time ago. Its ideology was soundly rejected in the 2012 election, its approval ratings are at an all-time low, and Glenn Beck, an early stoker of the Tea Party flames, is generally nowhere to be seen. And yet the House GOP still has plenty of Tea Party zombies within its ranks, infected with the ideology passed on to them by people like Michele Bachmann and Allen West, Tea Party progenitors who lost their own political lives long ago. In unison, the hoard has mindlessly pursued the defunding of Obamacare at any cost, with no regard for who gets hurt in the process. Also, like zombies, they’re in constant short supply of sufficient brains.

The former congressman from Texas pushed the Republican Party to accept libertarian principles long before the party at large finally pretended do so. He declined to run for reelection last year and has been more or less absent from the political scene ever since, and yet every time Paul Ryan or John Boehner woefully insist that the size of government must be cut — usually by slashing food stamps and other safety nets, never by easing restrictions on abortion or gay marriage — the ghost of Ron Paul is always lurking in the background, smiling with self-satisfaction.

Cruz’s Senate campaign was supported heavily by Goldman Sachs, where his wife is employed. Within two weeks of his election, he was appointed to co-chair the Republican Senatorial Campaign Committee, and tasked with grassroots outreach. In other words, the establishment had high hopes for how Cruz might help the GOP and, more broadly, the conservative cause. Then, the junior Senator from Texas shut down the government, accused his fellow Republican Senators of “bombing our own troops,” and refused to denounce outside efforts to defeat his party elders in primaries. In other words, he turned on his creators and became an uncontrollable, destructive force. Frankenstein’s monster is the natural fit for Cruz, which naturally means that some establishment type like Mitch McConnell should dress up as Victor Frankenstein himself. They could go trick-or-treating as a team!