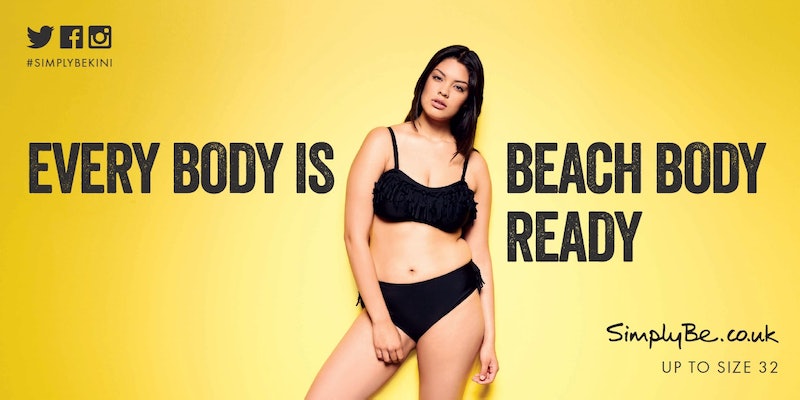 Regardless of the myriad of body positive activists, writers, and proponents in existence, fat shaming in the mainstream media remains rampant at this moment in time, and I rarely go more than a few minutes without seeing some form of message telling me that we should all be striving for waif-like thinness, by any and all means necessary. But this week, SimplyBe's #SimplyBekini campaign is sending a message of its own: Every body is beach body ready. As summer becomes even more reachable, we'll undoubtedly be seeing a plethora of negative imagery come in, so if you ask me, this campaign has come at the perfect time.

The campaign is a direct response to an advertisement published in the U.K. by weight loss corporation Protein World two weeks ago. Said ad, initially displayed throughout the London Underground, depicted a very thin (and very obviously digitally altered) woman in a bikini, with the slogan, "ARE YOU BEACH BODY READY?" Despite some pretty enormously negative responses to these ads, with an online petition attracting over 71,100 signatures that ultimately led the London Tube to remove the billboards and confirm that no more would be posted, Protein World remained rather flippant throughout the whole debacle. (The company has not yet responded to Bustle's request for comment.)

More recently, Chief Executive of Protein World Arjun Seth even likened feminists to terrorists in conversation with Channel 4, defending the ads as "aspirational" and saying the protestors were “extremist, they shout a lot, these people are irrational...” The company also vocally supported notoriously fat shaming U.K. columnist Katie Hopkins as she deemed the campaigners "angry chubsters," calling her efforts "great." But in April alone, Britain's Advertising Standards Authority investigated nine issues with Protein World's website, and upheld all of them. So at least there's that.

Fueled by the body shaming inherent within such ads, plus-size retailer SimplyBe has taken the opportunity to launch an advert of its own, featuring size U.S. 14 model Jocelyn Corona. Simultaneously, plus size-bloggers and fatshionistas have taken to Twitter and Instagram to share their own gorgeous beach bodies.

Of course, it is horrendous that companies continue to use such terribly sexist and oppressive advertising campaigns (see the "Ride me for £3" campaign that has recently disappeared from the backs of buses in Cardiff, Wales), but if there is a silver lining to be found it may be this: These nightmarish marketing tactics have enabled debate and discussion. Women of all shapes and sizes have stood up and been counted, telling the world we have had enough of such misogyny. The decisions of Protein World's marketing directors have inadvertently brought widespread attention to this issue, and I don't believe the impact of that can be underestimated.

Personally, I am so tired of being told that my body is wrong, that my stretch marks are wrong, that my desire to wear gorgeous clothes that actually fit me is wrong. (Really, Jamelia? REALLY?) I am so on board with these amazing women who are ready to go to social media (and to the beach) and show everyone that their bodies are beautiful, regardless of the (frankly laughable) social acceptabilities we have to deal with these days.

Some of the awesome U.K. plus-size bloggers who have championed this campaign include Rosie Astbury of A Rose Like This, Bethany Rutter of Arched Eyebrow, Georgina Horne of Fuller Figure Fuller Bust, and Becky Barnes of Mrs BeBe Blog.

I don't think I can over emphasize the importance of campaigns for body confidence — in a world where we are constantly being told that we are not good enough and that we don't meet some form of nonsensical societal standard, it is so heartening to see strong women raising their voices and telling everyone that not only are they good enough, they are freaking fabulous!

The fact is that ad campaigns such as the one from Protein World are damaging. They tell women that in order to be acceptable, they must be thin. And in order to be thin, they should do whatever it takes. That is a dangerous stance and one that, if we are honest with ourselves, can easily lead to mental health problems, which can lead to eating disorders, which in turn can lead to actual physical health problems. I am no medical professional, but I do have some experience when it comes to mental health (decreasing the stigma since 1987), and I know firsthand the damage that self-hatred does to a person.

So join me in applauding SimplyBe and its comrades for not only their marketing prowess (of which they have plenty) but also their seemingly genuine desire to support the body acceptance movement and offer my fellow fatties and I pretty clothes and swimwear to fit our wonderful bodies.

More like this
I Tried Kendall Jenner's No-Pants Look As A Plus-Size Woman
By Sarah Chiwaya
How To Curl Your Hair With Leggings, According To TikTok
By Carolyn Steber
TikTok’s New Beauty Hack Involves Drying Your Hair With A Pasta Strainer
By Catharina Cheung
The Internet Can’t Get Enough Of Viktor & Rolf's Upside Down Dresses
By El Hunt
Get Even More From Bustle — Sign Up For The Newsletter
From hair trends to relationship advice, our daily newsletter has everything you need to sound like a person who’s on TikTok, even if you aren’t.