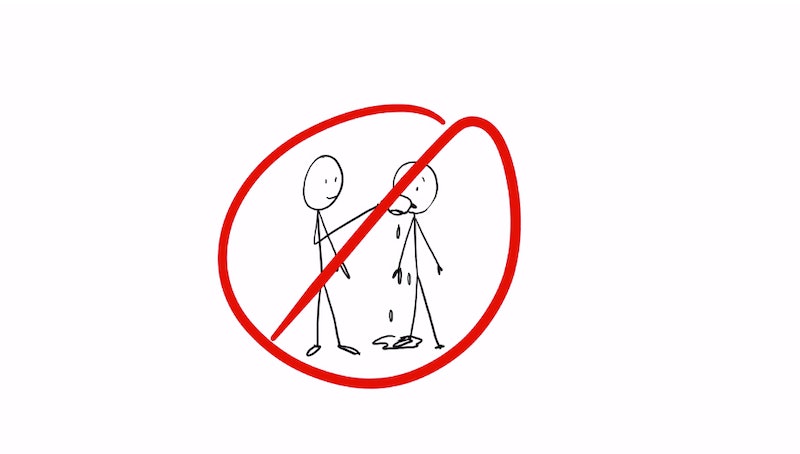 You want to know something that’s actually very easy to understand? Consent. Unfortunately, due to the kind of society we live in, the concept of consent has become very difficult for some people to grasp. Hopefully this wonderfully simple cartoon explaining consent using a tea analogy might just make it easier to understand.

I understand that we’ve been exposed to harmful messages from society and media that only contribute to rape culture. These messages often reduce women to nothing more than sexual objects, spread the lie that a woman’s “no” means you just need to change her mind, and that men are just insatiable beasts who can’t help themselves. (Looking at you “Fifty Shades.”) Because of the culture we live in, too many people don't understand what rape is and the very simple message that you need consent in order to have consensual sex is often distorted, confused, and lost.

Thankfully this cartoon, produced by Blue Seat Studios in collaboration with RockstarDinosaurPiratePrincess, breaks through that distortion by replacing sex with tea. So imagine that instead of trying to have sex with someone, you’re offering them a cup of tea. In the best-case scenario, when you ask them if they want tea, they give you an enthusiastic “yes!” or even “Omg f-ck yes, I would f-cking LOVE a cup of tea! Thank you!” Go ahead and make them a cup of tea.

But what if they aren’t sure if they want tea when you ask? Then, as the video says, “you can make them a cup of tea, but be aware they might not drink it.” Only makes sense since they didn’t say yes.

If that's the case — they don't want the tea you painstakingly made for them — please don’t make them drink it. “Just because you made it doesn’t mean you are entitled to watch them drink it.”

If they initially said that they don’t want tea? That just makes it easier for you since now you know that you shouldn't make them tea. Even if you really want to make them tea, just don’t. And again, most importantly, don’t make them drink it.

What if they say yes to tea at first, and then change their mind after you’ve made the tea? While it may be annoying, people are allowed to change their minds. And they still don’t owe it to you to drink the tea.

And if they are unconscious? You don't even have to ask if they want tea, because, as the video explains, "Unconscious people don't want tea and they can't answer the question 'do you want tea?' Because they're unconscious." And definitely don't force them to drink. Even if they took a sip or two on their own before they were unconscious, don't continue making them drink it.

No matter how you phrase it or set up the scenario, you shouldn't force tea on somebody who doesn't want it or can't drink it. Just like you shouldn’t force sex on someone who doesn’t want it or can’t consent to it. Still have some questions? Watch the rest of the video: