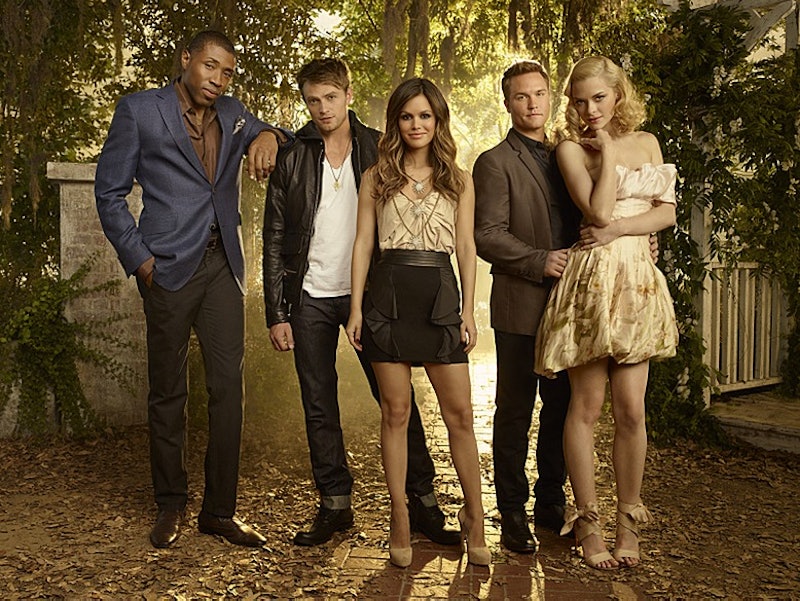 It’s been two months since Hart of Dixie’s final episode, which can only mean it’s almost time to begin the series anew. The only problem is, the short, 10-episode Season 4 has yet to stream on Netflix. Judging by fan reactions and some heartfelt HoD goodbyes via social media (courtesy of some of the show’s primary cast), the Season 4 finale made for a satisfying series finale, which it ended up being, since The CW cancelled Hart of Dixie in May. So now you know why fans are so desperate to watch that final season again — we didn't know it would be our last chance to spend time in Bluebell. Update: According to Netflix's newsletter, Hart of Dixie Season 4 will be available to stream on Dec. 15.

Like previous seasons, we know that Hart of Dixie Season 4 will become available to stream on Netflix, we just don't know when. Previously, seasons of The CW series including Gossip Girl, 90210, The Vampire Diaries, and Hart of Dixie have only debuted on Netflix a few months prior to the new season’s premiere date. But since there won't be a Season 5, that makes it harder to pinpoint exactly when to expect the final season to become available. If Hart of Dixie follows its previous pattern despite the cancellation, we should expect it online sometime this fall, likely by early October.

Hopefully, we won't have to wait that long, but whenever Season 4 finally becomes available for streaming, here are the seven Hart of Dixie moments all fans should revisit immediately.

1. Annabeth Knows Too Many Secrets, "The Curling Iron"

In the second episode of the season, Brick and Lemon tried to hide the truth about their love lives from Grandma Bettie, Wade tried to hide his questionable romantic efforts, and Zoe tried to hide her pregnancy — all of which A.B. knew and got drunk for fear of slipping up. The only thing cuter than Annabeth drunk (see: tequila post-Lavon breakup) is Annabeth with an array of secrets.

Needless to say, nothing made fans happier than the Zade reunion and the mention of their Alabama Boy. But their happy ending wasn’t nearly as surprising as some of the other pairs'. What was surprising, however, and lead to an altogether perfect moment, was Wade showing up in New York to confess his love and devotion not just to Zoe and the baby, but also to her suspicious and manipulative mother.

For a while it seemed like Lemon and Crickett would never be friends again, but Crickett coming out really helped to bring them closer together. This episode also made me realize that when I’m 30-something, all I want is a montage of me drinking cocktails with my high school girlfriends at my ex-fiancé’s lake house.

In case you couldn't tell, this was one of the best episodes of Season 4. George and Lemon were one of the show's loose ends that really needed tying up before it could end. George went all-out trying to get Lemon’s attention, but his sudden epiphany that Lemon is not the love of his life is a moment I can’t wait to see again.

Bluebell was so caught up in its usual shenanigans that the whole town forgot about Brick's birthday, which was a huge deal in previous seasons. Brick was devastated to find that his two daughters, business partner, and girlfriend all forgot about his 61st, and it made for an entertaining episode.

How fitting was it to end the series with a corny song and dance number? Even though Lavon accidentally hijacked Zoe’s proposal to Wade, both weddings were fitting for the couples, totally refreshing, and made for the perfect ending to a perfect series.

More like this
The OG Power Rangers Are Returning For A Spandex-Clad Special
By El Hunt
Here’s Everything Coming To & Leaving Netflix In February
By Jake Viswanath
Netflix Shut Down 'Bridgerton' S3 Rumours About A “Very Dark” Storyline
By Bustle
'Wednesday' Star Emma Myers Thinks A Wenclair Storyline Is “Possible” In Season 2
By Alyssa Lapid
Get Even More From Bustle — Sign Up For The Newsletter
From hair trends to relationship advice, our daily newsletter has everything you need to sound like a person who’s on TikTok, even if you aren’t.