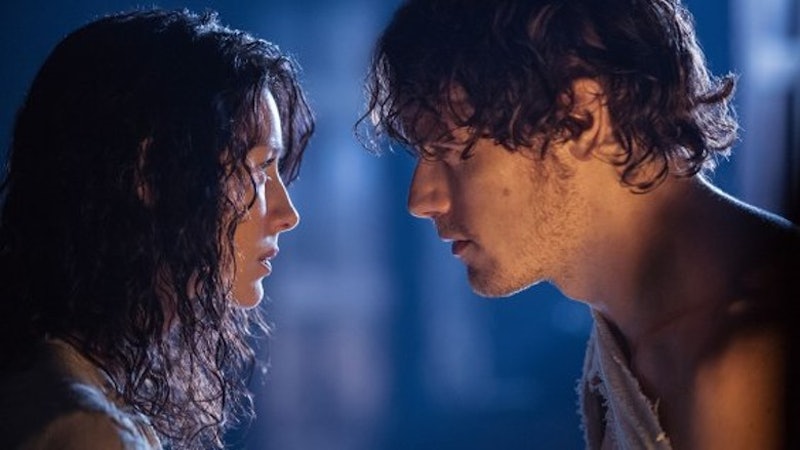 Rumor has it Season 2 of Outlander finally began filming in early May and things are about to get crazy. The whirlwind of violence and pleasure that was the first season was refreshingly faithful to the first book in Diana Gabaldon’s Outlander series, so I think it’s safe to say the second season will remain pretty close to the book too. But, if that’s the case, Outlander Season 2 will mean a lot of change for TV’s hottest couple. For those of you who haven’t read the books and don’t particularly love spoilers, I’m going to have to politely ask you to take a hike. Spoilers are ahead.

Believe it or not, within the first few sentences of Dragonfly in Amber, the second book in the series, you find out that Claire somehow found her way back to Frank — pregnant with Jamie’s daughter — and that it’s 20 years later. Their 20-year-old daughter Brianna thinks that Frank is her father until Claire finally decides to tell her the real story. And that’s when the flashbacks begin. So, in order for the series to remain faithful to the books, these six things are about to change for Outlander in Season 2.

As a fan of the books, I’m dying to know who will play grown-up Roger MacKenzie (the cutie with the biscuits from early in Season 1) and Brianna Randall. Unfortunately, no one has been cast yet for these two or other fan favorites like Claire and Jamie’s sort-of-adopted son Fergus, Lord John Grey and Bonnie Prince Charlie. The good news is, there are rumors that some of the new cast might be announced at the San Diego Comic Con in July.

Fans of the book series know the show's location will change from 18th-century Scotland to 18th-century Paris. Executive producer Ron Moore revealed to Hypable that they will still be filming the majority of scenes in Scotland, but they will be shooting a couple of scenes in Prague to double as 18th-century Paris. The sequence will also need to flash back and forth between the 18th and 20th centuries, so we’ll be seeing a ton of really cool location changes next season.

Considering that the couple is in France and that Brianna was raised in 1950s-60s Boston, costumes are going to be severely altered. When Ron Moore spoke to Zap2it, he said Outlander was getting a major makeover for the new season because Paris was the fashion leader at the time. As the cast moves between France and Scotland, costumes will feature brighter colors, different fabrics and elaborately embroidered silk clothing. Supposedly, these costumes were designed to be just as authentic as the ones seen in the first season, so all good news on the fashion front.

Now that Jamie knows where Claire is really from, the two of them will be on a mission to change the awful fate of the MacKenzie clan. That kind of pressure by default makes them a married couple of a whole different kind. But, then there’s Claire and Frank. If anything, that relationship will likely be a little different from the book, because they developed his character so much in Season 1. When Claire makes her way back through the stones pregnant with someone else’s child, you know there’s going to be some drama there.

It’s still unclear whether Season 2 will open in 20th-century Scotland, where the doubly widowed Claire and Brianna are visiting from Boston, or in 18th-century France. Either way, both time periods will have to be represented within the season. Technically speaking, the major difference here is that the “present” in Season 2 will be the 1970s as opposed to where we leave off in Season 1.

Only because they’ll be in France — but have no fear, Jamie is still Scottish.

More like this
Netflix Shut Down 'Bridgerton' S3 Rumours About A “Very Dark” Storyline
By Bustle
Bill & Frank’s 'The Last Of Us' Episode Has Twitter Emotionally Wrecked
By Alyssa Lapid
'Wednesday' Star Emma Myers Thinks A Wenclair Storyline Is “Possible” In Season 2
By Alyssa Lapid
Everything To Know About The 'Daisy Jones & The Six' TV Series
By Maxine Harrison and Brad Witter
Get Even More From Bustle — Sign Up For The Newsletter
From hair trends to relationship advice, our daily newsletter has everything you need to sound like a person who’s on TikTok, even if you aren’t.