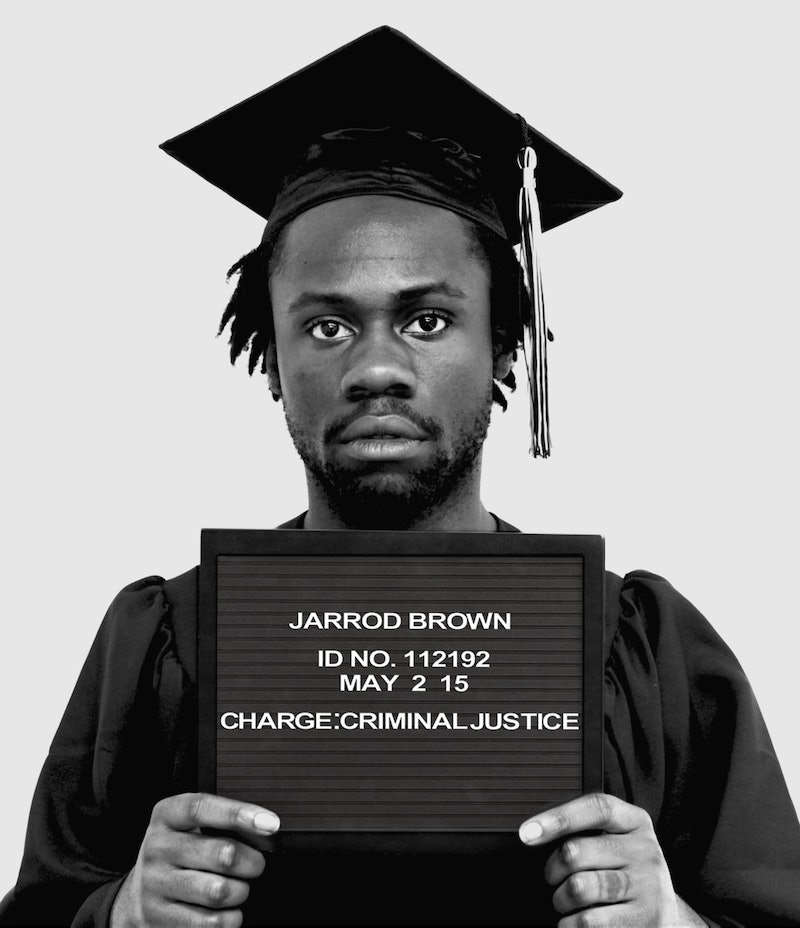 For EJ Brown, the creator of a collection of photos called “The Mugshot Series,” the frustration began when Trayvon Martin was shot and killed. And it continued boiling up until the Michael Brown and Walter Scott shootings.

“I was just really frustrated with the conversations people were having about black people’s experiences, “ Brown tells Bustle. He was also particularly frustrated by the way the media portrayed black victims of police shootings. Especially Michael Brown.

“A lot of people painted him as a thug,” Brown said. “They’d show a picture of him with a group of friends and call it a gang.” They would even misinterpret a picture of Mike Brown holding up the peace sign, he added. The media’s treatment of black victims has been heavily criticized, especially when compared with how they treat white suspects and killers. Brown mentioned James Holmes, the Colorado theater shooter who killed 12 people, as an example of someone who received better media treatment than black victims. A prime example of this is how the New York Daily News recently wrote about Holmes' love for comedies such as The Big Bang Theory.

While the media is quick to humanize and try to understand white killers, they’re just as quick to demonize and justify the deaths of black victims. And that’s a very frustrating thing to witness as a black person in America.

A picture of Michael Brown in a graduation cap and gown caught Brown’s attention. And as an artist who wanted to make a statement about the way media portrayed black victims and black men in general, he decided to create “The Mugshot Series.” He discussed the idea with a group of friends, purchased his graduation cap and gown, and then scheduled shoots.

When Brown finished editing the series, his friends were surprised by how powerful the images were. When, at a friend's suggestion, Brown posted the pictures on Tumblr (a more public platform that his Facebook page) he was in turn surprised by how quickly the series gained attention. The series currently has over 20,000 notes on Tumblr.

Admittedly, a concern I had about the series was that it would send a message that only a certain kind of black man – the college educated kind – deserved respect. Of the thousands of responses Brown has received on his series, the comment that being educated and having a degree won’t protect you from police brutality has been a common one.

“That’s the point,” Brown said. “No matter how good or how great, I can be or I am, for some folks, it’s not good enough.”

Brown says he used the theme of graduation because it represented his current experience (he recently graduated from Point Park University in Pittsburgh). He says he also misspelled "Engineering" intentionally to represent how police officers cover up wrong doings that often lead to false arrests. In addition to challenging how black victims are portrayed, he also addresses general stereotypes about black people.

“We’re not all criminals,” Brown said.

It’s an absolute shame that we still have to explain that in 2015. As "The Mugshot Series" continues to spread, I hope more people understand Brown's message and stop rushing to justify our deaths.