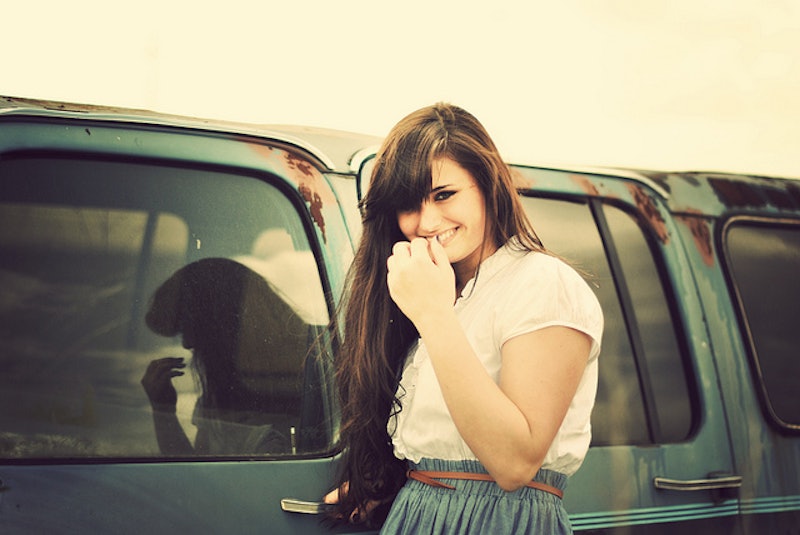 We all have our awkward moments — those times when we don’t know what to do with our hands, or we say something completely inappropriate at an important dinner party. But awkward people don’t just have occasional awkward moments, they have a gazillion awkward moments. They’re so awkward that it becomes part of who they are. And when you're dating an awkward girl, there are a lot of things you need to get used to.

Some people may have an awkward stage, but they grow out of it—the truly awkward never do.

An awkward person may say the wrong things, get themselves into embarrassing situations, and have the ability to make other people feel just as uncomfortable as they do. It isn’t as if they don’t know what they’re supposed to do, it’s just that sometimes it comes out wrong, and their best intentions start a domino effect of social-awkwardness for everyone involved.

Awkwardness can be endearing and adorable like Zooey Deschanel, or kind of absurd like Miley Cyrus, or hilarious and brilliant like the character J in Issa Rae’s webseries The Mis-Adventures of Awkward Black Girl.

When we see an awkward person, whether it’s on TV, in a play, or a movie, we can relate to them, because no matter how cool and on point we may be, we’ve all had times when we’ve been socially challenged, and done something slightly mortifying and awkward. So here's what you need to know when you're dating an awkward partner, because they're probably different from anyone you've ever dated.

She may not be a genius at everything, but her ability to over analyze everything you say, write, or text is amazing. She's also good at doing a play by play in her head over her latest fail.

2. She assumes everyone just wants to be friends.

You can give her the clearest signals that you’re interested, and she’s still going to think being friends is all you want— even after you’ve been going out for months.

3. She sometimes forgets the how to do things like breathe, whisper, smile, and especially how not to choke on her own saliva.

When your stress levels are rising it's hard to remember how to do some of the simplest things, especially when you've looked like an idiot when you've done them in the past.

4. She has many friends who are just like her.

Awkward people understand what it's like to be awkward, and there's nothing better than having a BFF who totally understands what you're going through on a daily basis, especially if it's understanding without judgment.

5. Human interaction can be challenging for her.

Hugging strangers is the worst as she has no idea what she’s supposed to do once her arms are around another person. Once you're done hugging, how do you disengage gracefully?

Small talk is an art, and the awkward girl has no talent at it.

7. She sucks at making the first move.

First of all, it's going to take a long time to convince her that you want to be with her, then when that's clear, she's going to get increasingly nervous building up to that first kiss. If she makes the first move, it's going to involve some alcohol, maybe a lot of alcohol.

8. Her body language is bizarre.

It can feel to an awkward girl as if her body is entirely separate from her. She never knows what to do with her hands, has been known to trip over things, and sometimes just standing doing nothing seems impossible.

9. She can be insecure, but has a healthy sense of self.

One minute, she might think that nobody likes her, and then the next, know that when people get past her awkwardness, and see her for the amazing person she is, they usually really like her, because what's not to like?

10. She speaks the language of awkward.

She has been known to accidentally makes up new words, or use normal words incorrectly. No matter how much she thinks about it, she sometimes has no control about what's coming out of her mouth.

11. Everything is a secret handshake to her.

When do you do a handshake, as opposed to a fist bump, or a high five?

She may bring up weird conversation topics because silence can kill you. And what's up with the awkward pauses that go on for years?

She hates every picture taken of her, since she always ends up looking uncomfortable and alone—even in group pictures.

14. She has a natural instinct to flee.

You might like to stay until most people have left a party, but your socially challenged awkward girl is going to want to leave early. Get to know her signal for, I’m done.

She’ll think of something funny she could have said hours after she should have said it. But don’t worry, she’s going to try to use her hilarious comeback in another situation-usually with embarrassing results.

Your awkward girl has a very specific set of things she’ll do and won’t do and the ways in which she’ll do them. It’s best if you give up on that idea of doing an improv or sketch comedy group together.

17. Avoidance is survival for an awkward girl.

She’ll think nothing of walking out of her way to avoid running into someone she knows, especially if the encounter might be awkward.

Once you have a connection with an awkward girl, she will never take it or you for granted. She understands that some of the things she does and feels may not make complete sense to you, but she appreciates your willingness to see her awkwardness as charming and endearing.

More like this
I Spent 2 Years Trying TikTok’s Dating Advice
By Kailynn Johnson
4 Zodiac Signs That Will Take Forever To Admit They Like You
By Kristine Fellizar
Ashamed Of Your Screen Time Stats? Here's How To Change That
By Alexis Morillo
Learning To Love, Not Judge, The Lunchbox Wives Of TikTok
By Esther Zuckerman
Get Even More From Bustle — Sign Up For The Newsletter
From hair trends to relationship advice, our daily newsletter has everything you need to sound like a person who’s on TikTok, even if you aren’t.