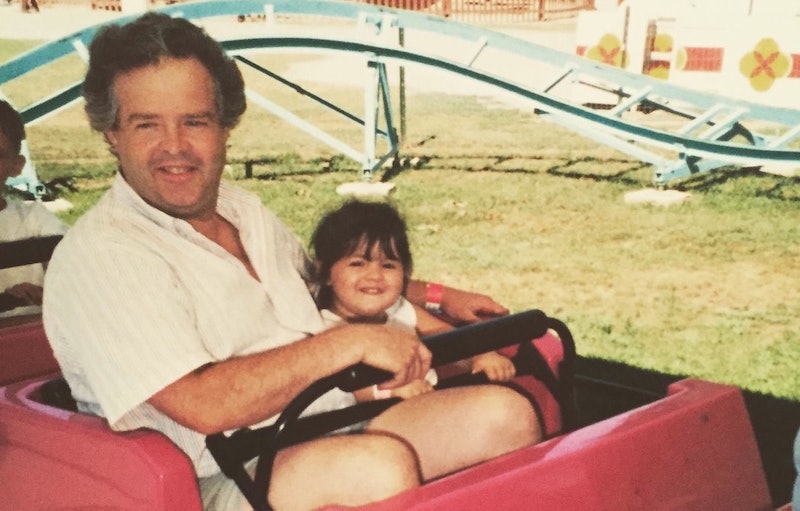 He doesn't know it, but amongst the many lessons from my dad, he played a huge role in how I approach fashion. If you ever told him I said such a thing, he most certainly wouldn't believe you. As with pretty much any angst-y teen, I made a point to balk at almost everything he wore, the protests of, "You're wearing that, Dad?" a whine all too familiar to his ears.

Interested in all things teen magazines told me was hip and cool, my dad and his wardrobe ranked pretty low on the list of fashion inspiration. But again, as happens with most everyone once they get a bit older, I eventually started to truly appreciate my father for all he has done and continues to do for me, fashion inspiration included.

Now, before I get any further, it must be made clear that by any and all standards, my dad is not what one would call "fashion-forward." He never seems interested in wearing more than what he always has, let alone in dressing according to what advertisements and fashion spreads tell him to. He owns one suit, he doesn't wear a tie to work, and he has continuously used the same wallet since I was a young girl (I'm 23 today). Yet, for reasons both not so obvious and in plain sight, he's still such an inspiration.

Dads Don't Care What You Think

Perhaps the most reasonable explanation for my citing of Dad as a fashion inspiration is his perfect IDGAF attitude when it comes to dressing. My dad dresses in what he likes. Normally, this means the same old jeans he picked up at the department store 10 years ago when we went Christmas shopping for my mother, a grey t-shirt (occasionally switched out for a forest green L.L. Bean collared option), and a worn Pittsburgh Pirates baseball hat. Day in, day out, this is his wardrobe and it has been for as long as I can remember.

Of course, evolution and experiment are important parts of fashion — but I have to say that my dad's consistency and sheer disregard for any sort of trend is incredibly refreshing. By sticking to the classics he loves, my dad inadvertently provides a constant reminder of the importance of staying true to yourself, be it in a fashion sense or otherwise. His "looks" may not even be "looks" at all, but that doesn't really matter. What matters is that he wears what he wants to wear. I know he's not trying to make a statement, yet it's in such a way that he makes the biggest and most important one of all: Stick true to who you are, and don't listen to anyone who wants to change it (even it that person is your nagging teenage daughter).

Dads Are The Original Hipsters

It's nothing new to say that dads are the original hipsters, and my father is no exception to the rule. Whether it's his stories of college keggers in the 1970s, his Beavis and Butthead impressions, or his refusal to read anything but a paper copy of The New York Times, my dad securely fits into the dad-as-hipster stereotype. Logically, his sense of style — both past and present — follows suit. Take, for example, that he wore aviator Ray Bans back in the 1990s, when everyone insisted that only faded, rimless shades were cool. Or, take the fact that he was wearing flannel button-ups years before your favorite designers incorporated them into an edgy grunge look.

Not seeing his coolness for what it was worth still stands as one of my biggest regrets from when I was a kid. Today, I admit to ransacking his closet every now and again for some over-sized button-ups or a cool vintage graphic tee. (As you can see from the picture above, he loves motorcycles, so my enduro t-shirt collection is pretty legit.) I even scored my favorite denim jacket, a Lee men's cut, worn from years of use in the garage, from a closet clean-out before my parents moved.

Every time I see a person walking down the street in a pair of the aforementioned aviators and a flannel, I can't help but think of him and how he insisted that only people like Steve McQueen and himself were cool enough wear the classic sunglasses shape. In retrospect, I can't help but agree that he was totally, 100 percent correct.

Dads Know How To Have Fun

At the end of the day, the greatest thing about my dad and his sense of style (if you could even really call it that), is his sense of humor. My dad knows that he is no Ralph Lauren. As such, he takes dressing to a level that seemingly only dads can reach. It's hard to describe the attitude, but perhaps it's best explained by the fact that my dad wears Hawaiian shirts without the slightest hint of irony; that he wears the same pair of bright green Converse high tops on St. Patrick's Day each year; that he wears cargo shorts specifically so he can use all the pockets.

By having a sense of humor about everything, my dad proved time and time again that fashion should be fun. I tend to get lost in the seriousness of style, of dressing according to rules and regulations, to what I think is cool, and admittedly also according to what others think is cool. So, having my dad show me that getting dressed each morning should be if not fun, then at least not a hassle, is something I am eternally grateful for. That, and the whole being a good person thing too, I guess.

More like this
All Of 2023's Biggest Nail Art Trends, According To Top Manicurists
By Jordan Murray
'Love Island's Will Got A Farm Animal Manicure & It's *Adorable*
By Sam Ramsden
Kendall Jenner’s Colored Tights Prove That Cheugy Can Be Chic
By Alyssa Lapid
Olivia Rodrigo’s Grammys After-Party Dress Was Sequined Perfection
By Alyssa Lapid
Get Even More From Bustle — Sign Up For The Newsletter
From hair trends to relationship advice, our daily newsletter has everything you need to sound like a person who’s on TikTok, even if you aren’t.