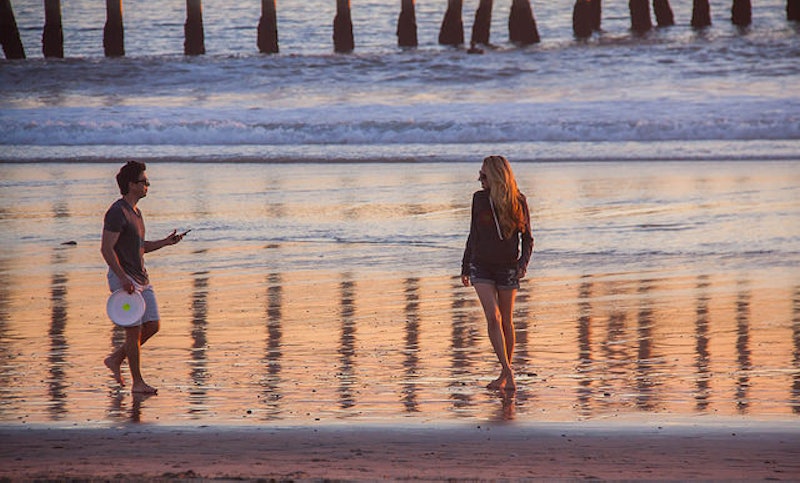 If you picture all California girls as blonde, blue-eyed, completely shallow females who compensate what they lack in intelligence with attitude, then you've got it completely wrong. There are all different kinds of California girls, not just the cliché kind, and if you don't know any, you're missing out.

California has a lot of beaches, but not everybody surfs. There are many people who live 10 minutes from the beach, and never ever go there. Beaches just aren't their thing; just like how mountains aren't for everybody, and some people hate camping so much that they don't even enjoy glamping.

One in eight people who reside in the United States live in California — that’s a crap ton of people. While some people may be scarily similar to the characters in the SNL sketch The Californians, there’s also a huge amount of people who couldn't be less like them.

California girls are tough—they have to be because they need to know how to deal with droughts, earthquakes, and the constant complaining of people from other states who (for some reason) are forced to live in LA or San Francisco, and must express how much California and its residents, suck on a semi-regular basis.

California women aren’t into competing about which state is the best—it's pretty pointless. You love your state, and that’s cool, California girls just can’t imagine living anywhere else.

NoCal is nothing like SoCal, but Central Calif. is kind of like both of them put together.California is so many different things that there’s constant talk of dividing it up into as many as 6 different states— that's like having a state for every different mood you're in. I feel depressed today, think I'll go to the state of Emo-California.

2. California Has Its Own Speak

The word hella is used by NoCal peeps whereas the classic like definitely has its roots in the San Fernando Valley. No one really calls California Cali, but it’s ok to call San Francisco-The City, and Sacramento-Sactown. Just don't call National City, Nasty City or Los Angeles, La-La Land.

4. There’s Every Type Of Girl In California

California girls are multi-ethnic, multi-cultural, beautiful, and for the most part open-minded. Since most Californians are pretty liberal, they're pretty chill about almost everything.

5. Californians Do It Outdoors

Californians try to spend as much time outside as possible, so many classes, movies and concerts are held outdoors, not to mention all the sex that people have in great outdoors. Watch out for pine-needles!

Everybody has to have their own shopping bags, since in many parts of the state, stores aren't allowed to give out plastic bags. Your California girl may be taking many less showers and is washing her hair less often to help conserve water. Sometimes people will even shower together, you know to save on water.

Every other person you meet in Southern California has their own webseries and they constantly want you to watch it. Some of these webseries are great and are fun to watch, others not so much. If you want a career in entertainment industry, you gotta have a webseries.

8. Californians Put Avocado In Anything

Almost every Californian has tried a juice cleanse, does some type of yoga or yoga/dance hybrid, and puts avocado in almost anything including pasta and pudding. At the same time, no matter how clean-eating someone is, they still know how to order off the menu at In-N-Out. Animal style fries, please.

9. She Thinks Urban Foraging Is Cool

When fruit falls on a public sidewalk, taking it is a good way to stretch your food budget. By using the food, and not letting it go to waste, you are doing a public service. Many people travel around looking for edible weeds and other plants to include in their meals—that's not crab-grass that's a salad.

No matter how crappy life might be for a California girl, she always has hope that things will get better. Maybe it's because California girls are so open to things like meditation, Reiki, astrology, essential oils, crystals, and even moleosophy (yes, it's exactly what you're thinking, the study of moles.) No matter which part of California they live in, a California girl is open to try new things and explore new places.

Remember the next time you hear someone says "She's so California," that it's a good thing.