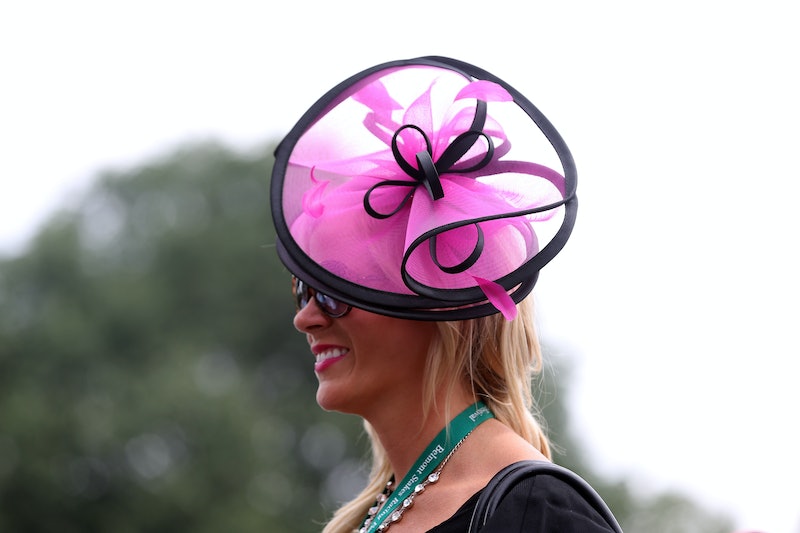 Remember when preppy fashion was cool? I'm talking back in say 2005, when nothing seemed to go better with green than pink, no collar seemed wearable unless it was popped, no shoes seemed to look cooler than a pair of boat shoes. Now, in 2015, just writing such outfit descriptions make me cringe a bit. Not just because such clothes remind me of a distinctly awkward high school existence, but also because in retrospect it all just seems so blatantly uncool.

Certainly this happens with any fashion trend — I'm sure teenagers now will have the same things to say about whatever style is cool these days. Yet still, there was a certain assuredness to preppiness that, looking back 10 years later makes it all the more obnoxious.

Solace remained, however, in the fact that preppiness appeared to have gone the way of Razor phones and Marissa Cooper (may she rest in teen melodrama peace). Save for the occasional frat bro, it's been years since I've seen prep out in the wild. But after a trip to Belmont Stakes last weekend, all calmness was lost.

Despite signs pointing to the contrary, preppy is still very much a thing — not necessarily a bad thing, but a thing nonetheless. What does "preppy" mean in 2015? Why does it matter? Who even cares? Curious, I took to some serious observation — something that lead to a subsequent investigation — and later a few realizations concerning prep in 2015.

Perhaps the most shocking thing about the prep I observed at Belmont Stakes was the utter lack of evolution from the prep I knew back in my high school days. Ultimately, the prep uniform remained unchanged. For men, there were boat shoes and bow ties galore; for women, it was still all about a tailored dress and bright floral prints. Again, not necessarily a bad thing, just not my thing.

And I think that's the biggest problem here. I don't want to get too far ahead of myself, but after a bit of consideration, I realized my issue with prep is the fact that it once used to so be my thing, and now nothing could be further from the truth. I used to rock a popped collar and tennis skirt better than anyone, yet now I could never imagine wearing such an ensemble.

We all go through style evolutions, and like any blast from the past, living through such an inescapable reminder of how you used to be isn't always the most fun. For me, preppy clothes signify an awkward teenager trying to fit in, even though deep down, she never really liked those pastel pink seersucker shorts the popular girl complimented her on.

But I Thought We Moved On?

Moreover, I was under the impression that my modern-day disdain for the style was somewhat widespread. I thought that like me, the majority of Americans stopped wearing this stuff a while ago. No one that I knew really associated with the casual prep style so popular a few years back — so I figured we all finally moved on.

But, the 90,000 capacity crowd at Belmont proved me dead wrong. Everywhere I turned, there was another person dressed in all out Chuck Bass levels of prep. We're talking bow ties, blazers, salmon shorts, tweed dresses (even though the race is in June), pearl necklaces, and floppy hats. So even if you and I moved on, a great deal of Americans out there certainly still love the style.

It would be hypocritical of me to judge a style for "being too judgmental," so as hard as it is for me to admit it, I guess prep isn't entirely terrible. Like most fashion, the style itself has some hefty social implications, presenting issues commented on throughout a wide variety of pop culture channels (books, tv, music). Preppiness is the country club aesthetic; it's meant to either look or actually be quite expensive. As gross as it may be, money plays a role in the look — there's no way around it.

However, without getting too deep into the social commentary, the look itself can be quite cool, especially when it's executed as thoroughly as it was at Belmont Stakes. There's something to be said of anyone who embraces a single style to such extremes. To know yourself and your style so distinctly is undeniably admirable, even if that style is one that many people don't wear anymore.

And in this way, preppiness has sort of transformed into perhaps one of the most — if not the most — alternative looks. At least in 2015, when hipsterism reigns supreme. Everyone is dressing in flannels and Dr. Martens, but not too many people are in cardigans and Sperry's.

More like this
Phoebe Dynevor Serves ‘Bridgerton’ Underboob In Stunning Floral Gown
By El Hunt
Beyoncé Wore A Golden Sheer Gown At Her VIP Dubai Concert
By Sam Ramsden
J.Lo's Micro-French Manicure Has A Fun, Sparkly Twist
By Olivia Rose Rushing
9 Must-Know Tattoo Trends For Spring 2023
By Carolyn Steber
Get Even More From Bustle — Sign Up For The Newsletter
From hair trends to relationship advice, our daily newsletter has everything you need to sound like a person who’s on TikTok, even if you aren’t.