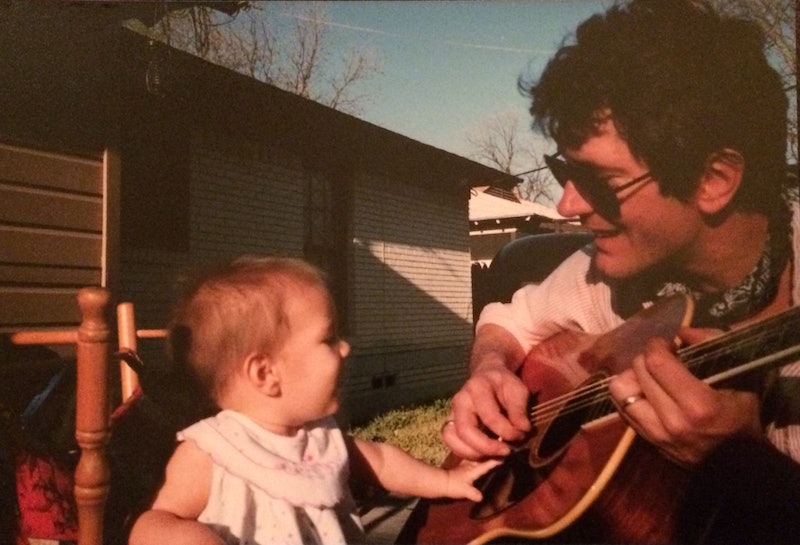 Father's Day is upon us, and everyone knows that dad wisdom is some of the best around, so in the spirit of paying homage to fathers and their very special role in our lives, I asked 10 of my favorite creative people, plus myself (always a personal fave) to reflect on a single question, “What are some weird ways your dad influenced you?”

As you’ll see from the responses (and I’m sure already know from real life), a lot of dads are overwhelmingly awesome, while others are quite the opposite, but regardless, they play a huge role in shaping us, and never fail to leave an indelible mark on who we eventually become. Their impact on us — from teeny-tiny things like always having Tic Tacs to great big things like influencing what we wind up doing for a living — lasts long after we leave their nest, or legal jurisdiction, or the front seat of their new Ford Mustang GT coupe they just haaaaad to show off (you earned that mid-life crisis, Rod!).

Dads: always with us, even when they’re not. So let’s hear it for ‘em — Happy Father’s Day, fellas! (Especially to mine.) Thanks for all of these nuggets of knowledge.

1. Walk softly and carry a jar of maraschino cherries

"Because of my dad, the most comfortable place to sleep is a car that he's driving. When I was a restless toddler, refusing to sleep, he would pack me up in his two-door Chevette and drive me around Clear Lake until I passed out, mouth open, best sleep of my life. He’s also incredibly generous with people in quiet ways, like if he knew a kid who couldn’t afford basketball shoes, he’d probably buy them and no one would ever know. I want to be like that. When I was a baby, we’d bike to see my mom at her waitressing job and order a fried ice cream, and he always let me have the cherry on top. Always! Now that's a good dad.” — Courtney Kocak (hi, that's me), 31, writer

2. Be a wearer of many shats

"My dad ran an online fedora hat shop for a while called 'Edmonds Hats,' but the web address looked like 'Edmond Shats.' This taught me if you want to do something, do it. Who cares. I only wear the finest of shats." — Michelle Alexis Newman, 30, photographer

"My dad was the best at leaving and never coming back — like SO GOOD. If I ever need to know how to do that, I have an amazing template. But instead of learning that lesson, I learned how to be strong enough for two people from my mom, and how to step up for others from my grandpa. Because my mom raised me alone, no challenge has ever seemed too big, and because my grandpa loved and treated me as a father, I'm capable of great love and sacrifice. I still don't know how to tie a tie, but by comparison that's pretty insignificant. Suck it, Dad." — Sofiya Alexandra, 32, writer/comedian

"Because of my dad, I like The Kinks, doo-wop bands, Tic Tacs, white chocolate, and shrimp." — Chloe Caldwell, 29, essayist and author

"From a very young age, I grew up watching my dad play music. He’s been at it most of his life. Before I was born, he spent the better part of his teens and 20s performing solo or touring in a Texas outfit called Southern Sky, and, despite a more reserved manner off stage, has always been a very natural and present performer. What seems to come easy to him has always been more difficult for me. I didn’t start young, and my personality was not originally suited for a career in music. In a lot of ways I’m still repulsed at the idea of standing on a stage making people listen to my bullshit, but as a kid, in our living room or on a swivel stool in some smokey ass Amarillo bar, I saw that my dad had this light-hearted, casual air about him that made it seem OK. Like he was just supposed to be up there. It wasn’t about commanding a crowd or having something to prove, it was just this discernible, pure enjoyment of existing in a song. There’s a million ways to be an artist, but Johnny B’s is the coolest, and I like to think that some of that rubbed off on me, along with his love for Budweiser in a can." — Caitlin Rose, 28, country singer

"The two most important things my dad ever taught me about driving were how to drive stick shift, and how to drive with your knees. The latter I learned by watching him, the former he intentionally taught me and all my sisters because, in his words, 'You just... you just never know where you're going to be or what's going to happen.'" — Shelby Fero, 21, TV writer/comedian

7. Don't stay on the straight and narrow

"If it wasn't for my dad I would not be in the entertainment industry. He showed me that it was OK for straight guys who like sports to also love theater and musicals and performing. Of course, he did come out of the closet a few years later. Oh well, I learned what I learned. Thanks, Dad!" — Eric Zimmerman, 30, TV writer

"One time my dad gave me a ski onesie and he saw how much I loved it. The next time I came home, I had four more, and he saw that I was wearing all of them so he kept buying more on eBay. Slowly I had a whole collection. I love wearing a different one every day on the ski mountain, and it’s kind of a signature to my identity, 'the girl with lots of ski onesies.'" — Sami Udell, 23, health coach and personal chef

"My dad wanted to be an actor, but he became a lawyer instead. He was Jewish, it was the 50s, and it was The Thing To Do Back Then. Throwing Jewish caution to the wind and pursuing Gene Kelly's career was Not The Thing To Do. My dad actively hated being a lawyer. He encouraged me from the youngest possible age to pursue whatever the hell I wanted, even if that meant being not necessarily successful, but happy. Because of my dad, today I live in Los Angeles and am an under-employed and under-showered writer/actor/filmmaker. Thank you, Dad." — Kira Cook, 31, writer/actor/filmmaker

"Here are the first things that come to mind: 1) Sometimes it's just best to throw money at a problem. 2) Traveling and vacations are to be enjoyed, and are worth spending money on. 3) An obsession with buying things used, which means hours of Internet research, which is most of the fun. 4) My dad always encouraged both my brother and I to follow our passions, and he supported us both in our pursuits because he believes very passionately about the arts — and despite a glaring lack of success, continues to support us to this day, the wacko." — Ariana Hodes, 29, singer

11. How to speak up for yourself

"My father has the most hilarious way of starting sentences. He's still got his Colombian accent, even though he's lived in the U.S. for over 30 years. He starts sentences in English with a loud exclamatory 'HEY! Ahhh…' and then slides into his topic of choice. I love this about him. It's as if he knows he's interrupting, but is trying to soften the perceived rudeness by making it sound exciting. I don't know how much time you've spent with Colombians, but interrupting is how they talk. It's not considered rude in the least — aggressively getting your point across while intently listening to your conversational partner is the name of the game. In the States, politeness is expected. I've had lots of fights with men who ask me why I'm not just holding my tongue till the man in question gets out his thoughts. Sorry, no, my dad taught me to speak the fuck up. 'HEY! AHHHHH... I HAVE SOMETHING TO ADD.' Thanks, Dad." — Stephanie Beatriz, 34, actress