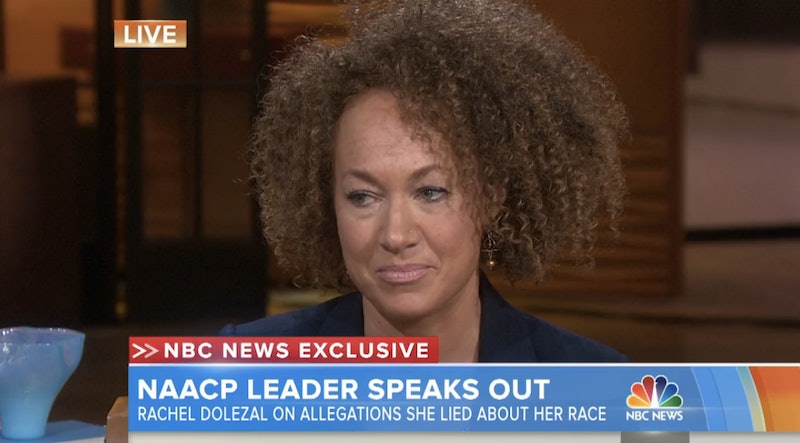 When I opened up Twitter on Thursday and saw my timeline abuzz with talk of the (now former) Spokane, Washington, NAACP President Rachel Dolezal, a white woman who pretended to be black for over a decade, I spent the next few hours of that night laughing about it. The situation is, on one level, absolutely hilarious. The moment when a reporter asked Dolezal if she was African-American and she answered with “I don’t understand the question” has been vined, gifed, and then replaced with even funnier gifs since Thursday's revelation. The hashtags #AskRachel and #RachelDolezalPlaylist blew up as black Twitter users joked about creating screening tests for people who claimed to be black.

But with more jokes came more information about the lengths Dolezal went to in her impersonation, which she discussed with Matt Lauer today. As more details were revealed, it seemed clear to me that Dolezal could have been an ally and advocate of the black community, but because she pursued this decade-long appropriation of blackness, she’s actually done more harm than good.

As Michelle Garcia at Mic pointed out, Dolezal’s actions are a “sort of blackface” and being transgender and "transracial" (which is a word used to describe adoptions across races, but that people are now using to describe Dolezal's attempt to identify as black) are not comparable. Garcia writes that while Dolezal lied (outrightly and by omission) about her identity, “transgender people like Caitlyn Jenner are not lying. If anything, their decision to come out is the ultimate declaration of honesty, of being upfront with who they are.”

Dolezal is not the first non-black person to find blackness appealing enough to appropriate it. There’s an entire Japanese subculture dedicated to imitating what they think it means to be an African-American. They too, darken their skin and style their hair in styles typically associated with black people. Iggy Azalea has been repeatedly criticized for her “blaccent” and her unwillingness to acknowledge the white privilege that made her the recipient of multiple rap and hip hop nominations. Appropriators have operated under the belief that blackness is something that can be achieved by hitting a few key points on a checklist of stereotypes, attending a few tanning sessions, and getting box braids.

As the NAACP said in a statement on Friday, racial identity is not a factor in holding a position in the NAACP. In fact, it's not a factor for a lot of what Dolezal achieved. Dolezal could have attended an HBCU (Historically Black Colleges and Universities), studied and taught Africana Studies, been an activist and a member of the NAACP, all as a white woman. She could have even used her white privilege to amplify the work of black women. But instead of acknowledging and using her privilege to advocate for a marginalized community, she appropriated from that community for professional benefit.

Dolezal must be aware that it’s white privilege that makes some people try to defend her actions by entertaining the idea that she could be "transracial." As a white woman with light skin, she took advantage of the diversity of African-American appearances. African-Americans who, no matter how light-skinned they were, were usually still counted as black according to the “one-drop rule.” For Dolezal — and those trying to defend her — to ignore how the idea of becoming another race is steeped in white privilege, and therefore unavailable to most black people and other people of color, is offensive. Not many black people can choose to identify as white and get away with it. When light-skinned African-Americans did "pass" as white, it was to avoid the marginalization and oppression that comes with identifying as black, even at the cost of cutting off ties with family and risking potential punishment if exposed. Allyson Hobbs, a historian and writer of A Chosen Exile, describing a family member who told her daughter to move to California to live as a white woman, said:

She felt this was a way to offer opportunities to her daughter that she wouldn't have living as a black woman on the South Side of Chicago.

Passing, an act only available to a small portion of black people to avoid the marginalization of blackness, and Dolezal's impersonation, an appropriation that took opportunities away from marginalized people, also aren't comparable. Because at the end of the day Dolezal is still white, and she gets to enjoy the privileges that comes with that.

Black women already face disbelief in a society where white people think racism is over and people don't trust women. False appropriation only adds more fodder to that fire. Dolezal's unsubstantiated stories of multiple hate crimes and discrimination are a mockery of the oppression that black people face, especially when they were used to try to legitimize her claim on blackness. Her claims are even more ridiculous when it was revealed that she once sued Howard for discriminating against her because she was white. Black women’s experiences of discrimination are often challenged — challenges that I see in nearly every comment section of an article of a black woman sharing such an experience, and even recently saw in a clip of Viola Davis talking about her experiences in Hollywood. Dolezal co-opting those struggles to bolster her own perceived authenticity only undermines them.

Let's not forget that Dolezal took a Howard University scholarship for black women and further benefited from the opportunities the scholarship provided her. That means that while Dolezal was profiting off this false identity, she was also taking opportunities away from black women. Did she even think about the economic and social conditions that make scholarships for black women necessary? Because she took that scholarship, there’s a black woman out there who needed the scholarship, but didn’t receive it. As she was paid to write and speak about her claims of growing up black, black women who could have filled those positions didn’t get to. In the end, who was Dolezal helping but herself?

Dolezal spoke over and trivialized the experiences of the very people she claimed to be advocating for. According to vlogger Franchesca Ramsey, two important steps for being a good ally are to "educate yourself" and to "speak up, but not over." Dolezal only managed do to one of these, and not very well. She went through years of education on African-American history and culture and was even teaching Africana Studies at Eastern Washington University. She’s learned enough to know that the only thing transracial about her is the adoption of two black boys — one of whom Dolezal's parents say is her adopted brother.

Dolezal had the privilege and education to be an ally, but instead she used what she'd learned to try to authenticate her claim to blackness and chose to do what many people historically and currently do to black women: She used them for her own gain.