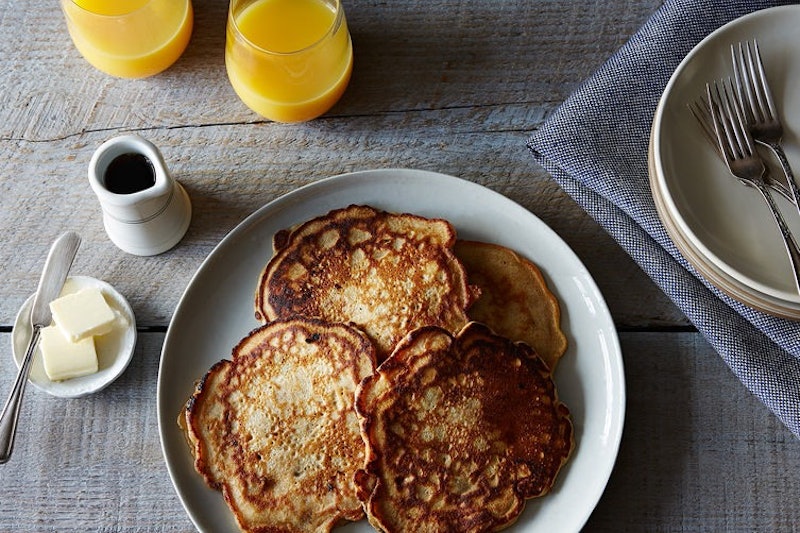 Breakfast and dad are two things that are always worth celebrating — which is why it's time to start brainstorming some amazing Father's Day brunch ideas to combine both of your favorites. Luckily, Food52 has already done most of the work for you. Here are five go-to meals everyone will love, but most of all dad.

A lot of men will insist that they don’t want Father's Day to be a big deal.

Take note: These men are lying.

Not only do they want a big deal made over them, they specifically want it made over their breakfast — and there are a few good reasons for this.

First, since Dad is probably getting a tie, he’s not emotionally invested in a gift. Second, when you have kids, no meal suffers more than breakfast (because little people are biologically designed to be at their most active and attention-starved early in the day). Think about it — if you have children, when’s the last time you saw your spouse eat anything other than fruit, cereal, toast, or coffee for breakfast? Exactly.

So, this Father’s Day, consider breakfast for a change. Here are five ideas for what to make that everyone (especially Dad) will like:

True story: Fatherly’s first office was down the street from Four & Twenty Blackbirds, a Brooklyn bakery famous for its pies but known to aficionados for the form of its cinnamon rolls (which are basically perfect). I got my coffee there every morning and waged an internal war to avoid buying one (you know, #dadbod and all that). One day, it all became too much, and I stared just a bit too longingly at the pastry case. The nice lady behind the counter asked if I wanted anything, and I snapped, “Yes, I want a punchcard that you punch every day that I come in here and don’t buy a cinnamon roll, and on the eleventh punch, I want ALL the cinnamon rolls.”

She thought I was weird.

There are two kinds of people in the world: waffle people and pancake people. There’s something a little cosmopolitan about a waffle compared to a pancake. The latter is quintessentially American, while the former requires fancy gear and has a vague European affectation to it. My father is a dyed-in-the-wool waffle man, but his rationale has its own country charm to it (ironic, considering he is a suburban Jew): Waffles are the superior maple syrup delivery vehicle, and maple syrup is something my dad takes very seriously. He prefers Grade B (C if you can get it), and if it comes from even one mile beyond the Vermont border, don’t bother taking the cap off. Sunday waffles were a tradition in my house (as you might imagine).

Actually, there’s a third kind of person in the world: waffle and pancake people. I’m that kind.

Breakfast tacos are a great Father’s Day breakfast because they're fun for kids to eat, and there’s something a little dangerous about having them for breakfast. You can tell your children with a mischievous grin, “We’re having breakfast for dinner!” and they won’t know until they’re in college that it actually means you don’t know how to cook anything else.

There is one overarching rule about Father’s Day breakfast: When in doubt, there's always bacon. The beauty of this rice is that it provides perfect context for bacon that is a) fancy-seeming enough, and b) ridiculously simple to make. It’s basically just eggs, bacon, and rice, so your partner can get everything whipped up quickly and let your kid assemble it, which makes them feel way more involved than if they’re just carrying the tray to the table or the bedroom.

I would suggest one slight tweak to the recipe, though: Double the bacon.