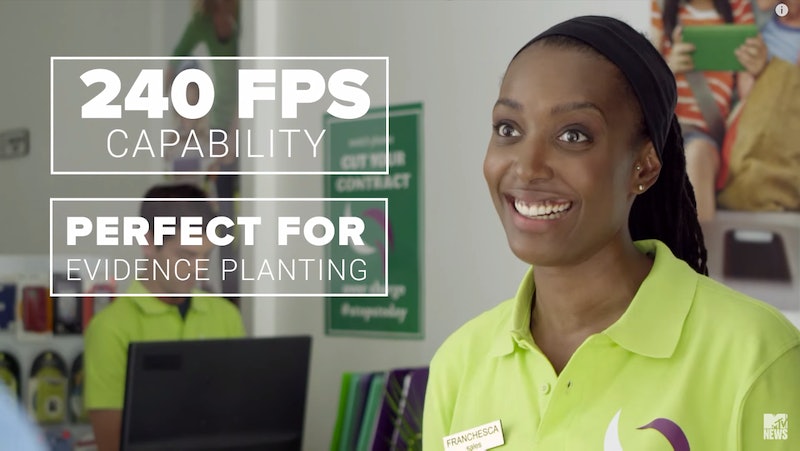 Activist and Comedian Franchesca Ramsey has been one of my favorite Youtubers since she came out with “Shit White Girls Say To Black Girls.” It’s that hilarity and frankness that she brings to “Decoded," MTV News' new web series on race. In her videos and blog posts, and even on Twitter, Ramsey hasn’t shied away from talking about race and other social justice issues. She uses her platforms to analyze and criticize racism, while also being an ally for other causes. In fact, she even created an educational video on how to be an ally. That’s what “Decoded” is when it comes race: an educational and honest series that helps people understand American racism.

The latest episode, "iC50: The Perfect Phone For The Whole (Black) Family," is a skit about police brutality in the US, and it's harder to watch. It’s a comedic approach to a subject that results in the assaults and deaths of black people, and it involves a scene where a police officer is pointing a gun at a black man, saying he's hold a weapon, when he's really just holding the “iC50."

Even though I believed Ramsey wasn’t making light of the situation, it made me uncomfortable. Which was kind of the point, Ramsey explained in a comment on the Youtube video:

So I realize that people are either going to love or hate this week’s episode given the subject matter, but it’s meant to make you uncomfortable. No, there’s nothing funny about police brutality, but our goal was to use humor to confront the issue head on. Cell phones aren’t just cell phones anymore. What they capture can literally be a matter of life and death. The fact is, police officers too often see black people as these overblown stereotypes rather than seeing us as people, and the best way we could illustrate that was to do so by being completely ridiculous.

When I make content I want people to laugh but I also want them to think. And while this is a comedy sketch, the truth is it’s not that far off from reality. That’s the problem. And that’s what I hope people take away from the piece and continue to talk about.

I understand why people would find the video upsetting, but I also understand Ramsey’s explanations. When the cop described the black man holding the cell phone as an “armed black male between 5’1” and 6’10,” I thought of how Darren Wilson described Mike Brown as a “demon” who was somehow “bulking up” while being shot at. As I noted that the officer making the report in the skit was a black male, I thought of how black police officers are also complicit in police brutality, as evidenced by the Freddie Gray case. Yes, it’s uncomfortable. But that’s because it’s reality.

There's a new episode of “Decoded” every Wednesday. Watch the latest episode below.

More like this
6 Organizations Fighting Police Brutality That You Can Support Right Now
By Syeda Khaula Saad and JR Thorpe
These Artists Are Reimagining Black History Month To Create A Better Future
By Katie Mitchell
25 Inspiring Quotes From Black Women To Celebrate Black History Month
By Kyli Rodriguez-Cayro and JR Thorpe
Ashamed Of Your Screen Time Stats? Here's How To Change That
By Alexis Morillo
Get Even More From Bustle — Sign Up For The Newsletter
From hair trends to relationship advice, our daily newsletter has everything you need to sound like a person who’s on TikTok, even if you aren’t.