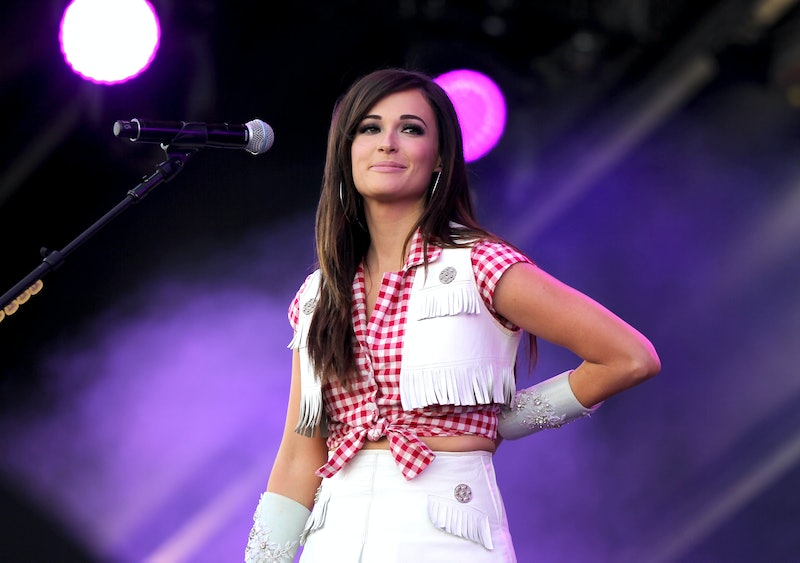 Harry Styles was right: It's impossible to listen to too much Kacey Musgraves. Be it her twangy songs full of wit ("mind your own biscuits and life will be gravy") mixed in with some pretty cool and progressive politics (particularly in terms of the country music world), Musgraves' music easily crosses musical genres, proving accessible to almost any ear. Take, for example, her set at Bonnaroo 2015 or her killer performance of "Follow Your Arrow" at the 2014 GLAAD Awards, both of which provided further evidence that Musgraves isn't your typical country star.

It should come as no surprise, therefore, that Musgraves' style proves equally unique. Just as her music transcends specific genres, her fashion most certainly cannot be defined by a single category. Like her music, her style proves undeniably rooted in country — but again, like each one of her songs, each of her looks always comes with a distinctly Kacey Musgraves twist. Yes, she'll wear cowboy boots, but said cowboy boots will literally light up. Sure, she'll have big hair, but she'll make sure it's the biggest in the entire room.

With the upcoming release of her sophomore album, Pageant Material, what better time to celebrate Musgraves and her distinctive music and style? Because even for those who truly loath country, Kacey Musgraves undoubtedly has one or two songs — and outfits — that anyone could like.

She's Unconventional In An Industry Ruled By Tradition

The coolest thing about Kacey Musgraves' style is just how unconventional it is. In a genre that receives constant (and merited) criticism for how it portrays women, Musgraves' personal fashion most certainly proves a welcome respite.

First off, she's brunette, a rare breed of country star that puts her staunchly in the ranks of cool girls like June Carter Cash, Shania Twain, and Gretchen Wilson.

Take, for example, the gingham shirt and fringed white leather skirt and vest combo she wore at the 2014 iHeart Radio Festival. The look most certainly gives a nod to her country roots, but it still includes a bit of flair that makes it modern, distinct, and appealing to someone who maybe doesn't always choose to wear gingham print.

Next on the list of what makes Musgraves' style so unconventional is her tendency to always have fun with what she chooses to wear. If it wasn't already obvious from her music, Musgraves' daring style choices make it clear that she doesn't ever seem overly concerned with the opinion of others.

As such, Musgraves consistently rocks some absurdly fun stage and red carpet looks. There's her aforementioned 2015 CMA Music Awards hair, a 'do that reached levels Dolly Parton would be proud of. There's her 2013 Grammy Awards dress (she won two awards that night, including Best Country Album), one adorned with a hefty amount of jewels, sheen, and even gold tassels.

For further evidence of just how much fun Musgraves can have with some country-inspired but still entirely modern attire, one need only search for a few of her music videos or scroll through her Instagram. Whatever the case, Musgraves clearly uses fashion to have fun, in the process creating a world full of vibrant colors (and a bunch of unapologetic sparkle) that's welcoming to any type of audience.

She Goes Her Own Way

All of this sort of fits underneath the umbrella statement that Kacey Musgraves proves a style inspiration because she dresses for herself and for herself only. Such a style mantra is hard to live by, and one could only assume it's even harder in an industry that constantly criticizes looks, especially in a subset of that industry that has incredibly rigid and antiquated standards as to how one ought to look.

I suppose it would arguably be easy to say that Musgraves is anything but unique — her skirts are short, her hair is big, and her makeup is never subtle (but always on point, I might add). To do so, however, would prove a huge misconception — not to mention a huge oversight of the inherent humor of it all.

Take a closer listen to her music, hear a bit of what she has to say, and Musgraves' independent, IDGAF attitude shines through. She's wearing what she wants to wear because she wants to wear it. Moreover, with all the glitter, fringe, and over-the-top patterns, silhouettes, and accessories, it's all the more clear that Musgraves knows not to take fashion too seriously. Consequently, regardless of opinion towards country music, it becomes impossible not to get a least a tiny bit inspired by Kacey Musgraves. Her look is not the least bit subdued, but that's what makes it so refreshing — like it or not, she won't apologize for anything.

More like this
Beyoncé Wore A Golden Sheer Gown At Her VIP Dubai Concert
By Sam Ramsden
Harry Styles Has Become An Accidental Vinted Model
By El Hunt
Phoebe Dynevor Serves ‘Bridgerton’ Underboob In Stunning Floral Gown
By El Hunt
Harry Styles Is Performing At The 2023 Grammy Awards
By Jake Viswanath
Get Even More From Bustle — Sign Up For The Newsletter
From hair trends to relationship advice, our daily newsletter has everything you need to sound like a person who’s on TikTok, even if you aren’t.