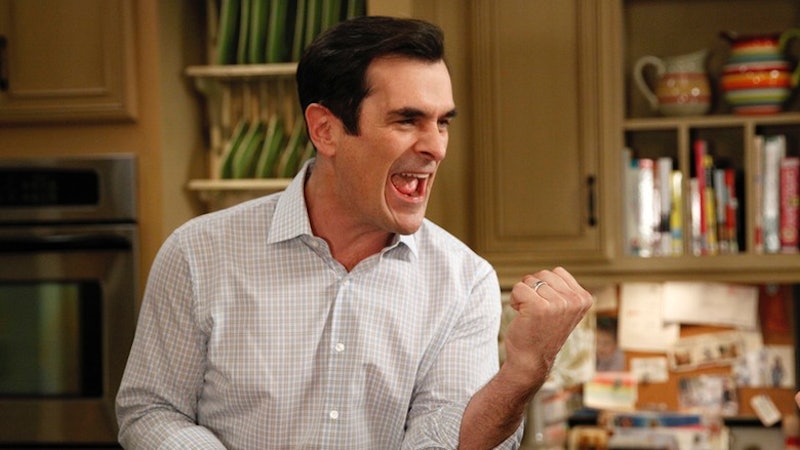 Father's Day, the day on which we pay customary homage to the nation's fathers, is here, my countrymen — Sunday, June 21, to be exact — and since we are at their Bermuda-shorted whim on this very special day, we must all prepare ourselves for the one-man comedy show that we will inevitably endure, because if one thing is certain in this unpredictable world, it’s that dads be looooooovin’ dad jokes, and that’s the darn (and unfortunate) #truf. So in the interest of being supportive, well-adjusted adult children who can swallow our superior comedic sensibilities for one freaking day of the year to stomach an endless force-fed buffet of dad jokes, I have prepared the anatomy of a dad joke, a scientific series of pie charts that covers all the essentials — who, what, when, and, alas, how to react. Knowledge is not stabbing yourself with a butter knife at brunch.

Another coping technique is to warm your ears up to the discordant sounds of a dad joke ahead of time by having your brother read a few so-terrible-they’re-good dad jokes to you in his regular speaking voice, which can only be described as eerily similar to your father’s. And don’t worry, we’re going to get through this pun-ishing day of dad jokes together, even if it means disowning our dads in unison so we never have to go through this again!

It's like you think you know one when you see one, but these days, you never can tell. The price we pay for progress...

While it's not stated explicitly, dad jokes are about being lame. Underneath the garbled puns and potty talk is a joyous delivery that comes from the freedom of not being cool anymore. It's not even on the table, and they couldn't care less. Giving up has its perks... they just don't come in the form of a stand-up comedy special.

It's true that a dad joke may strike at any time, so it's best to always carry a tube of Preparation H, which actually has off-label use as a mild sedative to men over 40. But just know that whenever you enter an Applebees, or within five feet of any waiter or food industry worker especially at a chain restaurant, your chances of encountering an extreme dad joke situation, perhaps even a monologue (which is a group of four to 27 uninterrupted dad jokes), increase exponentially. And let me promise you: it will be awkward.

Note the lack of laughter. Zero percent. Didn't even make the chart. That's because while there are many appropriate reactions to a dad joke, laughter isn't one of them. In fact, even a slight smile could be considered instigating, which is akin to making a dad joke yourself... and you would never, ever want to do that, would you?

And dads, we know you love these jokes, and we would never want to take that away from you (except in a heartbeat), but I just want to point out that the best possible outcome for a dad joke — and we're talking Everest here — is a network TV show starring a botoxed, ruddy-faced artist formerly known as William Shatner that got cancelled in its first season. And that dad didn't even get to write his own jokes. :/

More like this
I Spent 2 Years Trying TikTok’s Dating Advice
By Kailynn Johnson
These Artists Are Reimagining Black History Month To Create A Better Future
By Katie Mitchell
19 Instagram Captions For Celebrating Black History Month
By Ayana Lage
8 Things You Can Do To Appreciate Lunar New Year
By Elizabeth Tsung
Get Even More From Bustle — Sign Up For The Newsletter
From hair trends to relationship advice, our daily newsletter has everything you need to sound like a person who’s on TikTok, even if you aren’t.