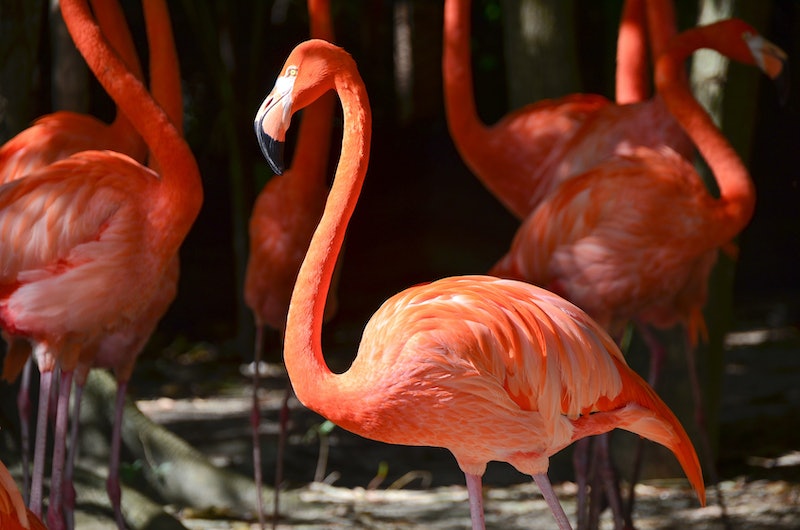 The US received some sad news this week: the creator of the pink plastic flamingo, Donald Featherstone, died on Monday at age 79. His wife, Nancy Featherstone, told the Associated Press that he died in a elder care facility in Massachusetts after battling Lewy body dementia. "He didn't have a selfish bone in his body," Featherstone told AP. "He was funny and had a wonderful sense of humor and he made me so happy for 40 years." It was that sense of humor that made him appreciate the fame that came with creating one of America's most iconic lawn decorations. In honor of him, here’s a look back at the history of his famous, bright pink plastic flamingos.

It was in 1957 that Featherstone created the first mold of the flamingos. He was a new hire at a plastics company, Union Products, and according to the Smithsonian Magazine, the flamingos were his second assignment. Since there was an obvious lack of flamingos wandering around Massachusetts, Featherstone used a National Geographic spread as models for his molds. It took about two weeks to create two different molds of the flamingos, with one standing with its head up, and another bird with it's head down as if it was "feeding." The birds were made 3D with "injection-mold technology" and the finishing touch was the Featherstone signature on the underside.

The Rise of Pink

So what made these bright pink birds so popular? According to Featherstone, it was the fact that they stood out so much in bland suburbia. In a 2012 interview with the Smithsonian Magazine, he stated:

You had to mark your house somehow. A woman could pick up a flamingo at the store and come home with a piece of tropical elegance under her arm to change her humdrum house.

In the same interview, his wife, Nancy, added, “People just thought it was pretty.”

The Fall from Suburban Glory

That is until the following decade, when hippies turned their backs on the plastics industry and the bright pink birds, which stuck out too much, were soon labeled “tacky.” The lawn décor trend began leaning toward more natural additions, such as fountains and rocks. It was around this time that Sears dropped the flamingos from their catalog.

The (Kind Of) Rebirth

This would have been the end of the birds, but thankfully, the “'70s were a carnival of schlock” as Haley Sweetland Edwards wrote in Mental Floss. The renewed interest in all things “tacky” and “uncool” as cool, made the flamingos a symbol of the times. John Waters' 1972 film, Pink Flamingos, solidified their place as everyone’s favorite kitsch item.

Unfortunately, that made it all too easy for them to become the era’s ironic joke. Instead of people genuinely liking them like they did in the beginning, the birds became a way of showing how "in" you were. Basically, the hipster symbol of that '80s. As Waters told Smithsonian Magazine, “It’s a classist thing. People like them in a way that’s not that original anymore.”

Now, the fluorescent birds, although not as popular as they used to be, have pretty much solidified their place as an American icon. I haven’t seen many pink birds decorating lawns, but they still pop up in culture every now and then. If cities like Madison, Wisconsin are willing to make the plastic pink flamingo their national bird, I don’t think we’ve seen the last of them.

If you’re interested in spicing up your lawn with a pink flamingo in honor of Donald Featherstone, just make sure you check for the Featherstone signature of authenticity.

More like this
You’ve Got 'Love Island’s Farmer Will All Wrong
By Jack Orenstein
Ashamed Of Your Screen Time Stats? Here's How To Change That
By Alexis Morillo
Learning To Love, Not Judge, The Lunchbox Wives Of TikTok
By Esther Zuckerman
How To Turn Off TikTok Profile Views So You Can Stalk Other Accounts In Secret
By Alexis Morillo
Get Even More From Bustle — Sign Up For The Newsletter
From hair trends to relationship advice, our daily newsletter has everything you need to sound like a person who’s on TikTok, even if you aren’t.