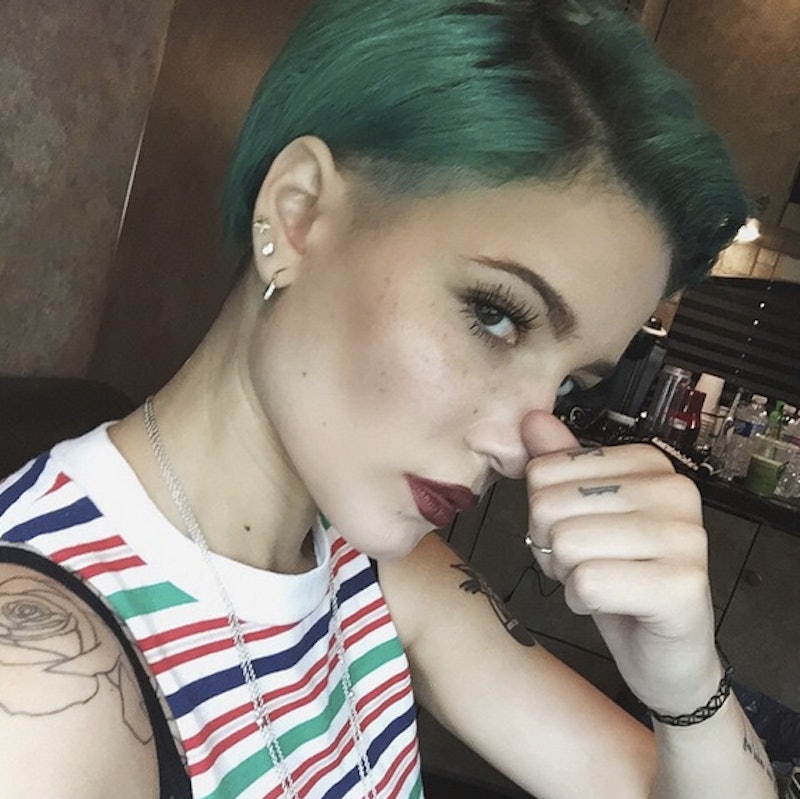 Humans love a stylish rockstar. But here's the thing — it's an unfortunate reality of society that the majority of rockstars are dudes. As such, most of what's considered "rockstar style" comes in the male form, and while this isn't an entirely negative thing, it's definitely almost always pretty boring. Thankfully, this past year has seen the rise of some brand new lady rockers who are redefining rockstar style. While giving props to the women who have been holding down for years (i.e. Gwen Stefani, Haley Williams), it's exciting to see a new wave of women shattering long-held clichés about what a rock star should look like.

In doing so, each woman has provided a new and exciting source of fashion inspiration. Of course, there will always be the rockstar style standbys, but these new artists are making such go-tos into staples all their own, adding personalized twists in the form of bold lipsticks, vibrant prints, creative silhouettes, bright colors, and some amazing hair.

Certainly, the coolest thing about all these new rockstars is simply the fact that they are women making incredible music, a feat that stands as something incredibly inspirational on its own. Their unique style, however, undoubtedly adds an extra touch, proving that not only can girls rock, but that they can do it in unparalleled style.

There really isn't a way to sufficiently describe the coolness that is Lizzo. The Minneapolis native makes music that sounds good, feels good, and does good. Each one of her raps comes with a message, be a socially conscious one or one that just forces you to have fun. For the former, take a listen to her song "W.E.R.K. Pt. II," for the latter, try the oh-so-catchy "Batches & Cookies." Whatever the case, flipping on some Lizzo means switching on some brilliantly different and new music that never ceases to be full of undeniable girl power.

As if the music wasn't enough, her style is just as influential. When it comes to fashion, there really isn't anything as inspiring as seeing someone who knows, embraces, and accentuates exactly what their personal style consists of.

Lizzo is one such person, something reflected in her vibrant music videos, on stage, and via Instagram ensembles. Always full of color, prints, creative silhouettes, and a plethora of accessories that all just somehow work, Lizzo's style is something all her own, providing yet another reason as to why she is just so damn cool.

With her song "Hurricane" (you know, the one about that place down in Bed Stuy) taking over the world, it won't be soon before Halsey controls it. Her debut album, Badlands, doesn't come out until later this summer, but Halsey has already established a distinct sound and voice, making her mark as the perfect mix of rock, pop, soul, and everything in between.

It make sense, therefore, that her style follows suit, itself a mixture of things that prove near impossible to define in just a couple of words — and perhaps that's the point. She expertly sports the requisite rock star skinny jeans and motorcycle boots, always adding an extra twist, most likely in the form of a bold lip or even bolder hair color and cut. Whatever the case, Halsey knows what it means to have personal style, making her sartorial evolution something as exciting to watch as her musical kind.

At only 20 years old, it's safe to say that Zella Day is absolutely killing it. Her song "East of Eden" has provided the radio with a much-needed dose of good, old-fashioned cool. With her dreamy beats and wistful lyrics, the Lana del Ray comparisons are inevitable, but Day is clearly forging a path of her own. A bit less glam and a bit more indie, Day's music provides the perfect soundtrack for summer nights, or anytime you're feeling a bit like channeling your inner hippie, really.

Unsurprisingly, Day's style follows suit. Be it through a Mary Kate Olsen circa 2004 Boho skirt or a wide-legged pantsuit offset by a kitschy white graphic tee (see the picture above), Zella Day mixes and matches to create a fashion inspiration that, like her music, is perhaps best summed up as urban-hippie-chic. Again, like her music, her sense of style is refreshingly different, and therefore all the more appealing to replicate.

Maybe you heard her song "Somebody Loves You" when it went viral thanks to an absurdly adorable proposal video, but in any case, hopefully by now, you know about Betty Who. A New Yorker by way of Australia, Betty Who (aka Jessica Newham) has been floating around the pop music scene ever since her graduation from Berklee College of Music. Her debut album, Take Me When You Go, is full of smart, sunny, synth heavy, '80s-inspired pop songs that stay stuck in your head for days.

Listen to just one Betty Who song and it's easy to realize that her music most certainly proves enough to set her apart from the pop stars already topping the charts. Take a look at her super-cool-girl style, however, and such distinctness becomes even stronger.

Just as with her music, Betty Who's style is an infusion of pure pop and a dash of indie. She rocks platinum blonde hair, but it's chopped into the coolest of of cropped cuts. She wears sundresses and crop tops, but always with accessorizes and a bold red lip (or maybe bold gold boots, like in the photo above). In such a way, Betty Who makes for a substantial addition to the list of pop power players inspiring on stage through both music and fashion.

As the frontwoman for the band Phox, Monica Martin recalls a bygone era. Martin and her band of five fellow Wisconsinites sing songs full of a spirt that invokes the funky folks of years past, without sounding the least bit dated. With songs like "Slow Motion" and "1936," Phox makes it clear that music in 2015 can still be fun, even if it isn't full of computerized beats and bass drops.

Monica Martin's style follows suit, proving something of a mix between old-school Hollywood and modern-day all-Americana. Be it through her stellar collection of high-waisted, A-line skirts or her tendency to rock some amazing oversized bowler hats, Martin effortlessly conveys an enviable style all her own.

Moreover, the one-time beauty school student definitely doesn't skimp on the hair and beauty looks, sporting some seriously cool hair (which she cuts herself) and makeup. Taken together, all of this makes for a source of fashion inspiration refreshingly different from the run-of-the-mill rockstar.

More like this
Harry Styles Went Shirtless In A Striped Jumpsuit At The Grammys
By El Hunt
Beyoncé Wore A Golden Sheer Gown At Her VIP Dubai Concert
By Sam Ramsden
25 Cute Ski Outfits That Look Hot & Keep Away The Cold
By Bella Gerard
All Of 2023's Biggest Nail Art Trends, According To Top Manicurists
By Jordan Murray
Get Even More From Bustle — Sign Up For The Newsletter
From hair trends to relationship advice, our daily newsletter has everything you need to sound like a person who’s on TikTok, even if you aren’t.