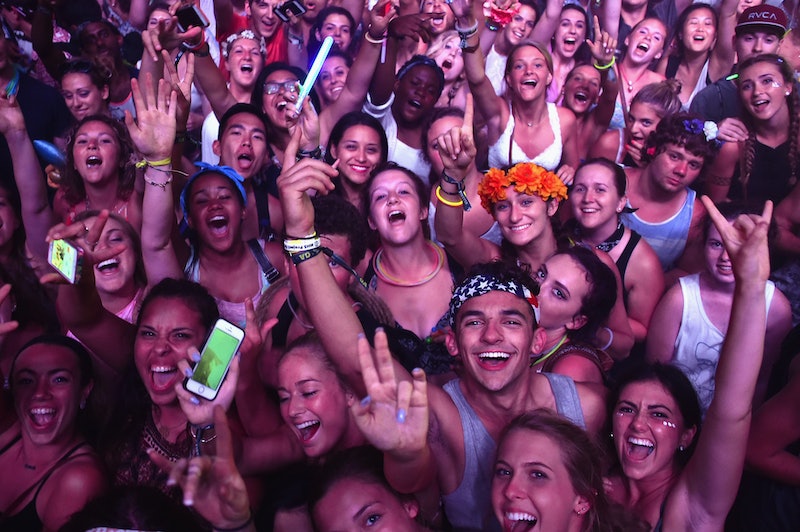 Fashion proves its most fun at music festivals — something about the environment, from the campgrounds to the main stage, makes for the perfect place to push the fashion boundaries. As last weekend marked the start of Glastonbury (perhaps the biggest and most legendary music festival of them all), news feeds are bound fill up with photos of the best festival style, where everyone seems to look straight out of an Urban Outfitters catalogue. Festivals mean flower crowns, peasant tops, and the most perfect pair of distressed denim shorts, right?

Well, after attending Firefly — my very first music festival — this weekend, I realized that for the most part, such photos could not be further from actual reality. Certainly, every summer music festival has its own personality, and therefore its own sense of fashion; going to one doesn't necessarily lead to a firm grasp on the others. However, it's safe to say that no matter what festival you're at, so long as you've got a General Admission wristband and camping pass, life isn't going to be as glamorous as it seems in all those (normally celebrity-based) style profiles. That doesn't mean that a distinctive festival style doesn't exist — it just means that the said "festival style" emerges as something much different than expected.

Go to any music festival in the U.S. during the summertime and it's going to be hot. Go to any festival in the south, east, or midwest, and it's going to be humid, too. As such, one of the most popular looks I noticed at Firefly (which is in the cloud of humidity known as Dover, DE) was simply no look at all. With stifling heat and humidity, the most fashionable options are bikini tops, sports bras, crop tops, and the shortest shorts possible.

After the first day, it became pretty clear that most everyone abandoned attempts at looking like Kendall or Kylie at Coachella in favor of dressing in a way that would alleviate the inevitable streams of sticky sweat dripping from parts of the body that shouldn't even have sweat glands. Obviously, there were no festival goers walking around in their birthday suits (because I'm pretty sure they'd get kicked out), but at lot of people got pretty close.

Like the penchant for nudity, glitter is undoubtedly a side effect of the brutal festival heat. Just as the heat quickly leads to an abandonment of even the chicest of festival-chic outfits, it also forces a total reevaluation of any beauty look. Lipstick is going to smear, mascara is going to run, and sweat will wash away whatever is left. As such, glitter — and its notorious stubbornness to stick around for ages — becomes a festival savior of sorts.

From body sprays to flash tattoos, glitter was (purposefully) everywhere at Firefly, once again proving that in terms of festival fashion, anything goes. It might not be the beauty look featured on style blogs, but it certainly works for making a festival seem like a shimmering escape from reality.

Of all the trends, neon was definitely the most predictable. Firefly did not disappoint, as neon popped up around every corner, making the festival grounds as close as I'll ever get to feeling like I'm a student at Bayside. The rise in EDM certainly plays a part — most of the neon was concentrated within the crowds for Zedd and Steve Aoki — but I think there's a little more to it. Like the glitter, the neon definitely added to the whole escape-from-reality element of a music festival.

Chances are the guy in the neon pink tank and the girl in her electric green crop top don't get the opportunity to wear such ensembles in their day-to-day lives. It's absurd, but it's fun, and again, it just makes the festival seem more like a festival — like a place where people are more concerned about the music than about making it onto some Instagram feed.

Sure, there were a lot of flower crowns, but the biggest trend I noticed at my first music festival was the overwhelming show of patriotism on behalf of bros and normal festival folk alike. I'm not sure how it is in other countries, but at this American festival, the national flag appeared in nearly every sartorial form imaginable. Be it t-shirts, shorts, bikini tops, tank tops, hats, bandanas, sunglasses, shoes — the stars and stripes were everywhere.

At first, it was all a little much — I'll never be able to get behind those "Back-to-Back World War Champs" tanks (c'mon, guys) — but all the un-ironic patriotism definitely grew on me. A great deal of festival goers took advantage of the weekend as an opportunity to go full-on U.S.A., a choice that sort of added to the celebration, reinforcing the notion that at a music festival, one is allowed to become the most extreme version of oneself.

More like this
13 Exciting Spring Fashion Trends That Feel So Fresh
By Allie Fasanella
Spring 2023's Hottest Shoe Trends Include Moto Boots, UGG Minis, & More
By Allie Fasanella
Harry Styles Went Shirtless In A Striped Jumpsuit At The Grammys
By El Hunt
Beyoncé Wore A Golden Sheer Gown At Her VIP Dubai Concert
By Sam Ramsden
Get Even More From Bustle — Sign Up For The Newsletter
From hair trends to relationship advice, our daily newsletter has everything you need to sound like a person who’s on TikTok, even if you aren’t.