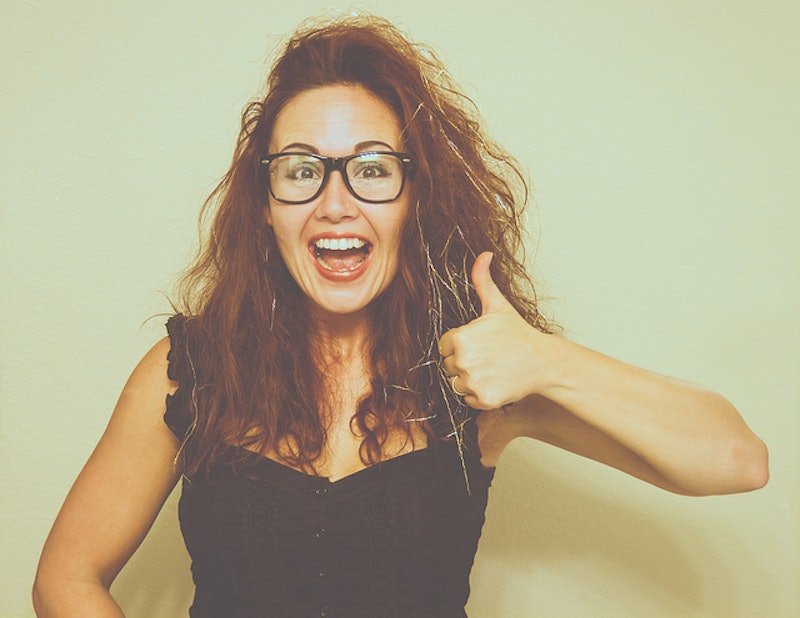 I was standing at the cash register at the deli waiting to pay, when a friend of a friend called my name. I turned around, and when I saw who is was, debated on whether or not I should give him a hug. He’d always been very friendly to me, so I decided there was no harm in giving him a quick squeeze. As I went in for the hug, I realized he was caught off guard at this show of affection from me, and didn’t know quite what to do--that's when things got really awkward between us fast. Even though it felt as if it was going in slow motion, there was no way for me to stop what I had started. The FOF was a lot taller than me, and I ended up not only face-butting his shoulder, but crushing his sunglasses that were attached to the front of his shirt. Awkward and we weren't even dating.

If you’re one of those women who always does the exact right thing, in just the right way, and have never had a moment's embarrassment, then you probably won’t be able to relate to the terrifying obstacle course that the rest of us awkward girls call dating.

I wish I could be like you, but I’m too busy overthinking everything I did wrong in my PDA of a virtual stranger. If only I hadn’t tried to hug him, and had just given him a friendly non-body-touching wave!

Would be awkward if I offered to pay for his sunglasses, or would that just seem weird?

1. Everybody makes you nervous.

Everybody. You even make your own self nervous sometimes. Why did you say yes to a date?

2. You have trouble wrapping your mind around the concept of making the first move.

A lot of things have to be super clear for you to even consider making the first move. Remember how you tried to put your arm around that guy at the movies and ended up getting your arm stuck between the seat and his arm? And then you tried it again and the result was even more humiliating.

3. Flirting. Warning! Whatever you do, don't try to flirt.

Some people might say that you need to fail at flirting — that's it's the only way you'll get better at it, but you know that when you flirt, you come off as a combination dragon and evil scientist with your grimace-smiles, and your unnatural arm movements.

4. You're great at learning foreign languages; you just can't translate the language of dating.

Are they asking you out or just being friendly? What are their motives? What are yours? He/she may have gotten the wrong idea when you talked about your UTI in excruciating detail.

5. You have social regret about almost everything.

You shouldn't have given that guy your number, a gift, advice, your Instagram, and anything else that's going to keep you awake at night. Why, oh, why did you order pasta, and why agree that dancing would be fun.

But you're a prepared kind of person, so you have a cheat sheet of conversation topics somewhere on your body. You can't always get to them easily, and may make your date question why it looks as if you're scratching your entire body while having an out-of-body experience.

If only you had ear-buds in your ear, and someone behind the scenes to tell you what to do. Handshakes are dorky, hugs are uncomfortable, and a kiss is completely out of the question. What's the protocol here?

You hate rejection, but you don't know if you could handle a second date, or gasp, a relationship right now.

Dating is tricky even for those people who aren't socially awkward, but it seems 10 times worse for those who are. Why isn't there a pill that you could take to just know right away that someone was the one, instead of having to participate in the confusing world of dating?