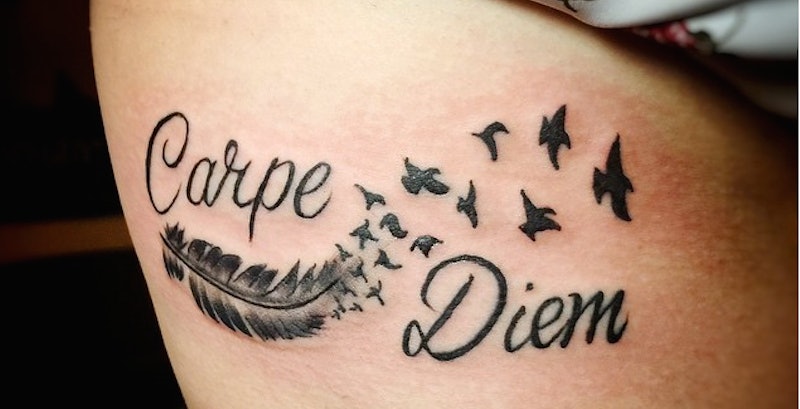 For many of us, tattoos are deeply personal. As someone with 10 of them can attest, the images and words we choose to permanently etch onto our bodies are often carefully chosen and thought out; and yet cliche quote tattoos still seem unavoidable at times. When it comes to myself, I personally wait a year after having a tattoo idea before going through with it. In my mind, if I still like it in a year, I'll still like it 20 years from now. And when it comes to picking meaningful quotes for tattoos, I need to make sure the words will always resonate with me, no matter where I am in life.

I like to think everyone tries to give their quote tattoos the same amount of thought. After all, forever is forever and the lasers that can undo forever are expensive and painful. But one of the things that makes popular quotes popular is that they are easily related to. When you take a popular, meaningful quote and multiply it by the thousands of people who relate to it and decide to get it tattooed, you get a trend. That trend, then multiplied by even more people who subscribe to it after the trend passes, turns into a cliche. Sooner or later, you realize everyone and their mother also has that really cool John Green quote you got on your collarbone — and it might make yours feel less personal.

If that sounds like your own personal nightmare, here are some of the most popular quote tattoos you should avoid.

Disclaimer: Like I said earlier, tattoos are incredibly personal. So if any of these quotes really mean a lot to you, or you have them tattooed already, don't fret. It's OK to like something a lot of other people like. Always do you!

As a major Tolkien fan, this hurts my heart to include, but it's so true. We all like to think of ourselves as wanderers in this great big thing called life, but when Tolkien wrote these words, he was referring to those of us who have no apparent destination or clear goals. Like your cousin Ronnie, who says he wants to make money playing video games, even if you're not entirely sure what that means.

Originally used as a reminder of humility for great kings of the past, this quote from Persian Sufi poet Attar of Nishapur is commonly used to tell us that our pain and struggles are surmountable and temporary. It's an important thing for all of us to remember, which is why it's so popular as a tattoo.

Created by the British government in 1939 as a motivational slogan for World War II, this phrase has become so popular you can find it (and its numerous derivatives) anywhere. So if you don't mind people coming up to you and saying, "O.M.G. I like have that quote on a mug/t-shirt/bumper sticker/poster," then go for it.

OK, so, I'm the queen of Severus Snape feels, and Harry Potter was a huge part of my childhood, but I'd probably never get this quote tattooed for a couple of reasons. Firstly, it is rather popular because of its simplicity and deeply emotional message. Secondly, it makes me think of Always pantyliners. But again, like I said, do you.

5. "And in that moment, I swear we were infinite." — Charlie (The Perks of Being a Wallflower by Stephen Chbosky)

Apart from my deep hatred of sentences that begin with "and," I'm never really sure what this quote means. But I also read Perks of Being a Wallflower when I was way too old to relate to it out of anything but nostalgia for high school, so there's that. When it comes to popular authors who have written popular books: If they're really good, you'll find other great sentences in their books to tattoo, not just the logline.

This is maybe the quote tattoo to end all quote tattoos. Taken from the Roman poet Horace's "Odes," this aphorism — which means "seize the day" — is used to express the importance of making the most of every day we're alive, because we don't know how many more we'll have. The English analog is also commonly used. Everyone knows someone with a Carpe Diem tattoo. Everyone.

7. "And though she be but little, she is fierce." — Helena (A Midsummer Night's Dream by William Shakespeare)

We get it. You're short and spunky. But if you haven't actually read this play/really love it, please don't get this tattooed, fun-sized friends.

OK, so, outside of these words being overused in tattoos, we need to have a conversation about the also cliche decision to accompany them with an anchor.

You... know what anchors do, right? Like why they're so heavy? It's because they're SUPPOSED TO SINK. They're meant to sink in the water and hold ships fast by clinging to the seafloor. So if you're trying to create a valuable piece about how to stay afloat, please don't use an anchor with this quote. In my search for examples of this tattoo, I found one with a buoy. Now that? That's brilliant.

9. "Live every moment. Laugh every day. Love beyond words." — Unknown, but probably Target.

Rule of thumb: If you can get it on a decorative plaque at Target, you shouldn't get it tattooed on your body. Buy it and carry it around with you if absolutely necessary, but otherwise avoid it. The decorative plaque lobby will thank you.

More like this
42 Black Owned Fashion & Beauty Brands To Support Today & Always
By Mekita Rivas, Shea Simmons, Kui Mwai and Dominique Norman
Phoebe Dynevor Serves ‘Bridgerton’ Underboob In Stunning Floral Gown
By El Hunt
Lizzo Scares Herself Meeting Her Madame Tussauds Wax Figures In A TikTok Video
By Alyssa Lapid
Gigi Hadid Gave Up One Surprising Thing After Having A Baby With Zayn Malik
By Alyssa Lapid
Get Even More From Bustle — Sign Up For The Newsletter
From hair trends to relationship advice, our daily newsletter has everything you need to sound like a person who’s on TikTok, even if you aren’t.