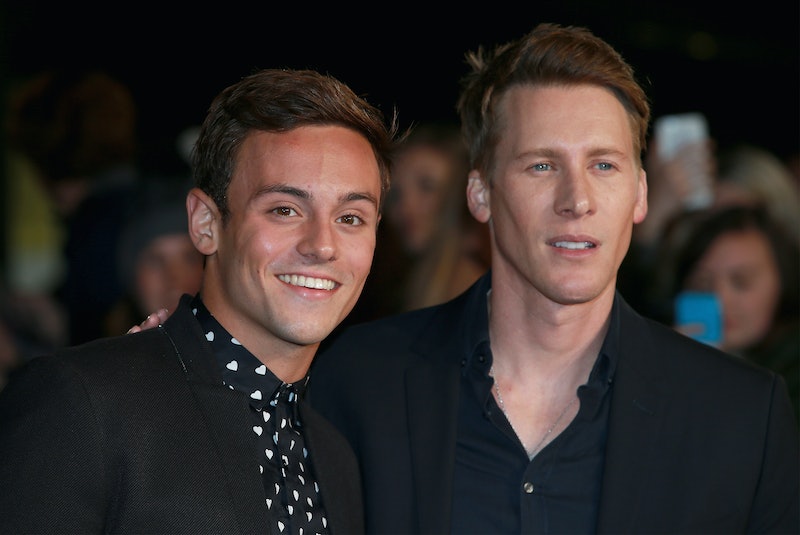 Being that the Olympics are always watched by millions of people around the world, many of the athletes are thrust into the spotlight and become celebrities on their own right, outside of their sport. One such athlete is Tom Daley, the young English diver who won the bronze medals in 2012 on the 10m platform and in 2016’s synchronized platform at Rio de Janeiro. Aside from his impressive diving skills, he had dashing good looks, which made fans all over the world fall for him and wonder about his relationship status. In 2013, Daley came out as bisexual and announced he was in a relationship with Oscar-winning screenwriter Dustin Lance Black. The couple have since become engaged, married, and now have a young son, Robbie. But how did Tom Daley and Dustin Lance Black meet in the first place?

Let’s begin by taking it right back to the beginning. Daley's 2013 coming-out YouTube video revealed that he was very smitten with his new boyfriend. Up until that moment, Daley confessed he hadn't really explored a relationship with a man, but his connection with his new boyfriend was immediate and intense.

Since the beginning of their relationship, it seems like Black and Daley have been very open in sharing details of their love, and Daley especially hasn't held back. In December 2013, just a week after he posted his YouTube video, Daley made an appearance on The Jonathan Ross Show and had some very strong and impassioned words to say about Black, which was impressive considering he had just come out.

Daley said of their first meeting, “It was love at first sight... I’ve never felt anything like it — and I made the first move.” That's sweet but how exactly did they meet? Luckily, they have shared those adorable details, as well, and they met the good old-fashioned way: at a dinner with friends.

In a cover story for Out 's Love Issue, which came out January 2016, Black and Daley were extremely open about the events of their first meeting, and how quickly everything moved after that. They met at a mutual friend's dinner party in early 2013 when Daley was in town for the Kids' Choice Awards in L.A. Daley said,

"I was in Los Angeles for the Nickelodeon Kids’ Choice Awards, and a friend organized a dinner, and got there at least 45 minutes late. I’m not going to lie: I had no clue who Dustin Lance Black was, or what he did. I just remember thinking, Oh wow, who’s that? As the dinner progressed, I kept on looking at him, and he kept catching me, which was awkward at times, because I would always look away."

It turns out that Black was immediately attracted as well, and it sounds like it was all very obvious to all their friends who were there. Black shared,

"...My friend texted me from across the table, and his text said, 'He’s Google-searching you.' I do that occasionally at dinner tables. But that, in combination with the look, made me think, Something’s up here, but that’s too good to be true... Tom had just won an award at some Nickelodeon TV show, and they were planning to celebrate, and I said, 'I’ve got to go home; I have a script to write.' And Tom took my phone, and he typed his number in with a winky face."

And the rest was history. Both men confessed that they spoke non-stop and were officially "together" after their first real date, which was about two months after they met and also Daley's 19th birthday.

In October 2015, Daley and Black announced their engagement in the marriages section of a newspaper, keeping it very old school. Debbie Daley, the diver's mother, told The Telegraph that the families supported the couple and that they would not begin to plan a wedding until after the 2016 Rio Olympics, which Daley had already qualified for.

The wedding eventually came in May 2017, where the couple married in front of 120 of their closest friends and family members in Devon. Sharing photos of the occasion on Instagram, Daley wrote: "Thank you to everyone who made this weekend the most special weekend of our lives!"

The couple have since welcomed a son to their family via surrogate, who they named Robbie (full name Robert Ray Black-Daley), after Daley’s father Robert, who died in 2011. In June 2018, Daley shared the following message on social media: “Welcome to the world our precious little Robbie Ray Black-Daley. The most magical moment of my life. The amount of love and joy you have brought into our life is immeasurable. Our precious son.”

Both Daley and Black often share photos of Robbie on Instagram, but have spoken out about not wanting to show his face for a poignant reason. “We share glimpses of parenthood, but keep Robbie for us and our family and friends,” the couple told heart.co.uk in 2019.

Daley and Black most recently celebrated their eighth wedding anniversary, which was marked on Daley’s Instagram with the following words: "8 years ago we met at a dinner, we lived on opposite sides of the pond and thought it was going to be impossible to make it work ... but we did!"

More like this
Molly-Mae & Tommy Fury Revealed Their Baby Girl's "Really Unusual" Name
By Sophie McEvoy and Sam Ramsden
'Love Island' Has Added Yet Another Bombshell To The Villa
By Bustle UK
4 Surprising Celeb Throuples That Got The Internet Talking
By Sophie McEvoy
Jennifer Coolidge Slid Into Ariana Grande’s DMs In The Most Iconic Way
By El Hunt
Get Even More From Bustle — Sign Up For The Newsletter
From hair trends to relationship advice, our daily newsletter has everything you need to sound like a person who’s on TikTok, even if you aren’t.

This article was originally published on July 18, 2016