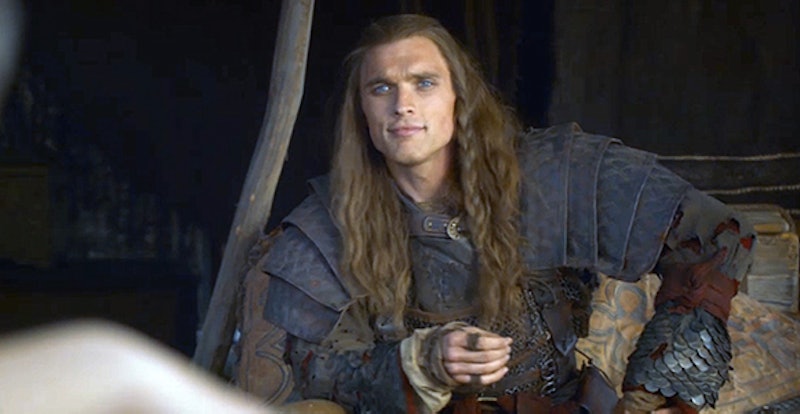 For those who are rewatching or finally entering the Game of Thrones world, you might notice a big difference come Season 3. We're talking about a whole new person who replaced Daenerys Targaryen's adviser and love interest. The role of Daario Naharis has been recast with a completely different looking (but still smoldering, no less) actor. But what the hell happened to the original Daario and his flowing locks?

Ed Skrein, who formerly played Daario in Season 3 and gave Jon Snow's mane a run for its money, was replaced by actor Michael Huisman. Huisman previously dabbled in HBO programming via Treme, starred as Liam in Nashville, and went on to play Kaley Cuoco's mysteriously murdered one-night stand on The Flight Attendant. When it was announced that he would join the critical darling, fans pegged him to likely play Styr, who George R. R. Martin described as "muscular in build and hairless in body."

While it's awesome to have Huisman on the show, devoted fans still wonder why Skrein left in the first place. It was previously reported that Skrein left Game of Thrones to star in a Transporter movie as a younger Jason Statham, but that's not the full story according to the actor himself. In September 2015, Skrein told Entertainment Weekly:

No. I mean, it wasn’t [the reason]. That’s what been reported in the press but it was a lot more political than that. My plan was to stay with Game of Thrones for the long haul. That was always my plan. I would have loved to. It was a wonderful experience, but politics led to us parting ways. And from there I just said, 'Okay, look forward, be positive. Keep calm and carry on.' That’s my mentality when things go well, so I stay grounded and not get to overwhelmed by the hype, and it’s my mentality when the plans change.

So, no, your eyes are not fooling you. Daario did have a total makeover, and that wasn't exactly in line with Skrein's plans.

More like this
Yes, 'The Price Of Glee' Is Available To Watch In The UK
By Catharina Cheung
'GoT' Star Emilia Clarke Says She "Just Can't" Watch 'House Of The Dragon'
By Brad Witter
'RHOSLC' Star Jen Shah Refuses To Do A Post-Sentencing Interview With Andy Cohen
By Brad Witter and Jake Viswanath
9 Time Catherine Cawood Was An Absolute Badass In Happy Valley
By Sophie McEvoy
Get Even More From Bustle — Sign Up For The Newsletter
From hair trends to relationship advice, our daily newsletter has everything you need to sound like a person who’s on TikTok, even if you aren’t.