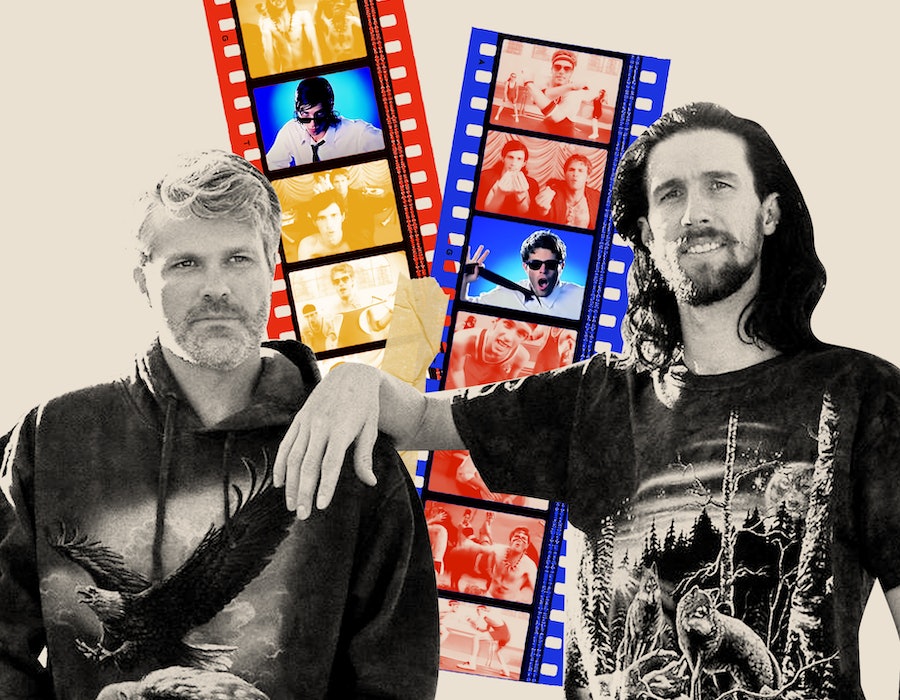 In retrospect, the aughts feel like one big party montage. Toward the end of the decade, the values of budding millennials were mostly aligned with the idea of being the life of the party as depicted in the period's coming-of-age movies like Project X and Superbad. Reality television was hyper-focused on (white) party culture in shows like MTV’s Jersey Shore and The Hills, and the tabloids were fixated on getting snaps of stars like Paris Hilton, Nicole Richie, Lindsay Lohan, and Britney Spears at clubs. And no band encapsulated this hard-partying ethos better than 3OH!3.

If you were of partygoing age from 2007 to 2013, being exposed to the music of 3OH!3 was nearly inevitable. For many, these songs were anthems of our youth, cementing a period in our lives before cancel culture was fully in effect. Equal parts catchy, cringey, and even controversial, 3OH!3’s lyrics are forever etched into the millennial collective consciousness. It’s not that listeners weren’t tuning in to what 3OH!3 were saying in their songs — it’s hard to unhear “Shush girl, shut your lips/ Do the Helen Keller and talk with your hips” — it's that the vibe was geared toward having a good time above any greater meaning.

“Music shifts and changes directions, but there's always going to be a want for that corner that we've been in, which is providing a party and having fun,” Sean Foreman, one half of 3OH!3, tells Bustle. “Sometimes you just want to turn on a song and be able to sing along with it, dance, and have a good time. That's what we're going for.”

Over the years, 3OH!3 left many critics stumped, wondering if what their songs were advertising was misogyny or stupidity. The Helen Keller reference was just the first instance of backlash for allegedly perpetuating rape culture, the objectification of women, and the exploitation of ableism. “There seemed to be a running string of, if not misogyny, then at least lack of respect for the female gender underpinning every hooky, shouty, high-energy song,” Entertainment Weekly wrote in a dispatch from South by Southwest in 2009. While their music videos were usually over the top — the “DON’T TRUST ME” video features the bandmates dressed as cavemen — 3OH!3 claims they only meant to get a laugh out of everyone. Lyrics about tight shirts, double Ds, and Daisy Dukes? Don’t take it so seriously! Yet their careers soon became more serious than they ever expected.

Before they were the premier purveyors of party culture, Sean Foreman and Nathaniel “Nat” Motte were students at the University of Colorado in Boulder. The pair had bonded over music and started working on their own material for fun in Motte’s basement around 2006, entertaining friends at house parties. Soon they were opening for acts at local venues and clubs, which led to going on Warped Tour and performing nonstop around the world alongside Katy Perry, LMFAO, Cobra Starship, and others. They drew inspiration from artists with “larger than life” stage personas like Andrew W.K. and Lil Jon, and their naivete of the music business only helped amplify their image as two party guys just here for a good time.

“We didn't set out to make it and we were so blissfully ignorant in a lot of ways,” Motte says. “We were very conscious about wanting to make music that was infectious, fun, and a little bit different with a little bit of an edge, mostly to just put a smile on people's faces and make them dance as the curators of music and the MCs of the party.”

Foreman recalls how he and Motte typically wrote song lyrics without a fully formed concept in mind, randomly piecing songs together in sections. “It just felt like it was literally us making a vision board of stuff that we were into at the time,” Foreman explains. While some lyrics certainly wouldn’t hold up on today’s scale of political correctness, 3OH!3 has no regrets when it comes to what was said or done in the past. Foreman says that it was merely “a time and place of our lives and our music has changed.” He adds, “We don't look back at that necessarily with regret for writing our music.”

Because 3OH!3 rose to prominence during the aughts, you'd be forgiven for not realizing they were still actively performing. But in reality, they only stopped touring when the coronavirus lockdown forced them to stay home like the rest of us. Even though the last time they put out music of their own was in 2016 with NIGHT SPORTS, the duo still fills up venues across the globe. They've also built up their resume behind the scenes in the music industry, staying busy working as producers and songwriters for artists like Ke$ha (“Blah Blah Blah”), Maroon 5 (“Love Somebody”), and Ariana Grande (“Tattooed Heart”).

Lockdown provided space for Foreman and Motte to step back and “examine what it is that we do as 3OH!3 and why we do it,” and the result is a forthcoming album appropriately titled NEED, which will drop later this year. “As an artist, you’re never gonna rewrite your old stuff,” says Motte. “This new stuff that we're working on, we're excited about because we feel like it encapsulates all the good about 3OH!3 and that sense of collectivity, fun, and of a party.”

NEED sounds like an older and wiser companion to 2008’s WANT. The project is a mix of high-energy bangers (“VAMPIRES DIET”) and stripped-down slow ballads (“SKID MARKS”) that pass the vibe check — 3OH!3 even flirts with the yee-haw agenda for a moment (“POUND TOWN”). Their latest single “LAST BREATH” features Slipknot’s drummer Jay Weinbergand is a bonafide party anthem. Yet as two white, cis men with a controversial past, where exactly does 3OH!3 fit into our woke new world?

Motte characterizes himself and Foreman as your typical “crunchy hippies” from Boulder. Last year, the duo got involved with fundraising for the Sierra Club and voter registration for the U.S. presidential election. Motte says that their participation in causes like this has always been part of their private lives, though he acknowledges that there’s more to be done publicly. “If we're optimistic about our piece in the puzzle and how it fits, it's that it's creating that sense of unity,” he explains. "For us, the core of what we're saying is bringing people together and having positive energy in a live setting and letting people express themselves the way that they want to."

For Gen Z listeners, NEED might be their first exposure to 3OH!3, who were partying before many of them were born. But Foreman and Motte aren't concerned with tapping into a new audience — they’re more focused on showing how their provocative mindset has evolved on both a personal and professional level. “I think times have changed,” says Foreman. “We've obviously evolved in a lot of ways in our music and what we're writing. I think it shows in our new stuff too, so we're just excited put out new music that represents where we are right now and still has the core essence of fun."

It's an essence that's always best been experienced live. The band has been experimenting with COVID-compliant performance venues, like bringing the party to Motte’s basement on a livestream. “We've done a couple virtual things but probably took it too far one night and got too hammered ourselves and literally couldn't even perform the show," says Foreman. "We're like, ‘This is why we need a crowd, to keep us accountable. Otherwise, we're just two guys in a basement.’”

More like this
Craig David Is Still Slicker Than Your Average
By Olivia-Anne Cleary
The Spice Girls Just Dropped A Brand New Music Video
By Sam Ramsden
Everything You Need To Know About ‘Black Panther: Wakanda Forever’
By Bustle Editors
Christian Bale Sang With Taylor Swift & His Daughter Can't Believe It
By Radhika Menon
Get Even More From Bustle — Sign Up For The Newsletter