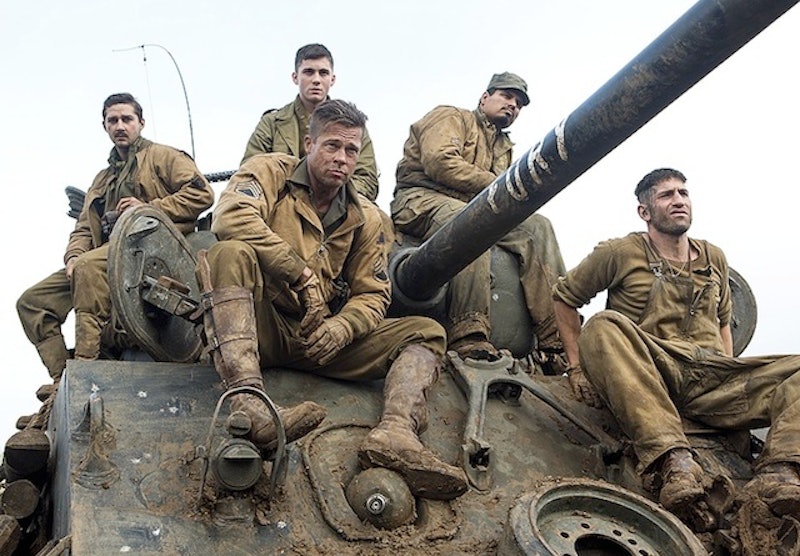 Though at first glance, Fury may seem as if it's just another World War II movie with a stellar cast (I mean, Brad Pitt, Jon Bernthal, Logan Lerman, Michael Peña, and Scott Eastwood? Yes, please), don't write it off as that just yet. While yes, Fury deals with the much-employed setting of World War II, it's actually much more true-to-life than it seems — even if it's not based on one singular story. From Street Kings writer/director David Ayer, Fury is based on a collection of true stories from real-life army veterans who spent their time during World War II in tanks, just like Pitt's tank crew in the film.

According to Collider, it was director Ayer's real-life association with World War II that drove him to keep the time as true-to-life as possible. "Both of my grandparents were in World War II and retired as officers," he said. "One fought in the Pacific and one fought in Europe. The whole family was in the war. I grew up exposed to it and hearing the stories, but the stories I heard weren't kind of the whole 'Rah, rah, rah! We saved the world!' They were about the personal price and the emotional price. The pain and the loss are the shadows that sort of stalk my family. That was something that I wanted to communicate with people."

The result was extensive research about soldiers who were real "tankers" during the war. In Fury, Pitt portrays US Army Staff Sergeant Don "Wardaddy" Collier, who's the head of a tanker crew maneuvering a Sherman tank across Germany in a single day toward the end of the war. According to the Charlotte Observer, Pitt spoke with veterans about their experiences, including a now 90-year-old man named Ray Stewart who fought at the Battle of the Bulge as a tank gunner and driver. "We fought the war over again right in front of those movie guys," Stewart explained to the paper. "We looked around and saw them sitting there with their mouths open. They seemed sort of flabbergasted."

Adding to the real-life details is the fact that Ayer was apparently able to secure wartime tanks to use during filming. He revealed, "Tanks from all over Europe. The owners were kind enough to let us weld them, paint them and get them into the exact configurations they were in during the end of the war. The Bovington Tank Museum, after extended negotiations, let us use a type of tank that has never been in a feature before."

This article was originally published on Oct. 16, 2014