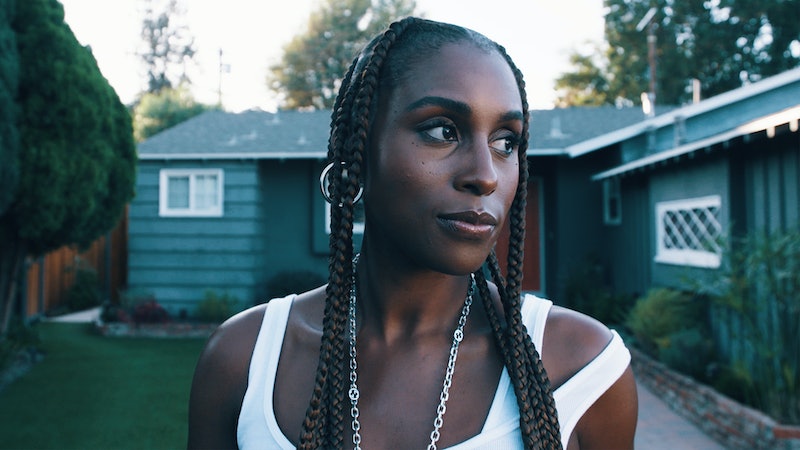 To some, Issa Rae might feel like a relative newcomer to the industry — her hit HBO series Insecure just concluded its fourth season, but like so many others, she's been at it for years. When she sat down with Bustle for a recent shoot, she told us all about the moments that changed her life and career over the years, and what led her to success. Read more of what she has to say below, and check out the video to hear to full interview.

"In 1996, I got to go to the set of Moesha and be in the live studio audience. I won a script. That script was the blueprint, the template, the ticket to get into the industry for me. That's what I used to write my own stuff."

On taking her own path..

"I got to college in 2003. I went to Stanford and Stanford was white as f*ck at the time. It still is. The drama department wasn't really diverse, so I didn't have the same opportunities to be in the plays. My freshman year, I was able to direct and adapt my own play. That's when I left acting behind and was like I want to be a director."

On creating the representation she wanted to see...

In 2006 or 2007, it was my senior year in college and reality television had hit super hard. Flavor of Love was super popular. It was kind of disgusting when I realized this is the only representation we have of black women on screen, and they're all vying for Flavor of Love. That's when I was like, "No b*tch that I know would do this. That's when I was like, where's our stuff? Where's the stuff I used to watch in the '90s? That's when I created a web series called Dorm Diaries about what it was like to be black at Stanford. It was literally about my friends. It went viral on campus."

On how Insecure was born...

"In 2011, I'd been living in L.A. for about two years. I'd seen 30 Rock and loved Curb Your Enthusiasm. I thought there was a specific type of black girl missing. I'd always identified as kind of awkward — it was a revelation to me, actually, especially in my adult years. But I was so frustrated, and I had this blog where I was constantly talking about the industry. Someone was like 'Girl, you talk a lot of sh*t. Why don't you make something?' I was like, OK, I guess I can."

More like this
Harry Styles' 'X Factor' Audition Didn’t Start Off As Well As You Thought
By Jake Viswanath
9 Unmissable Moments To Relive From The Commonwealth Games
By El Hunt
8 Epic Must-See Moments To Relive From The Lionesses’ Euros Win
By El Hunt
At 14, D'Arcy Carden Was Sneaking Out To Parties & Crying Over Kurt Cobain
By Ivana Rihter
Get Even More From Bustle — Sign Up For The Newsletter