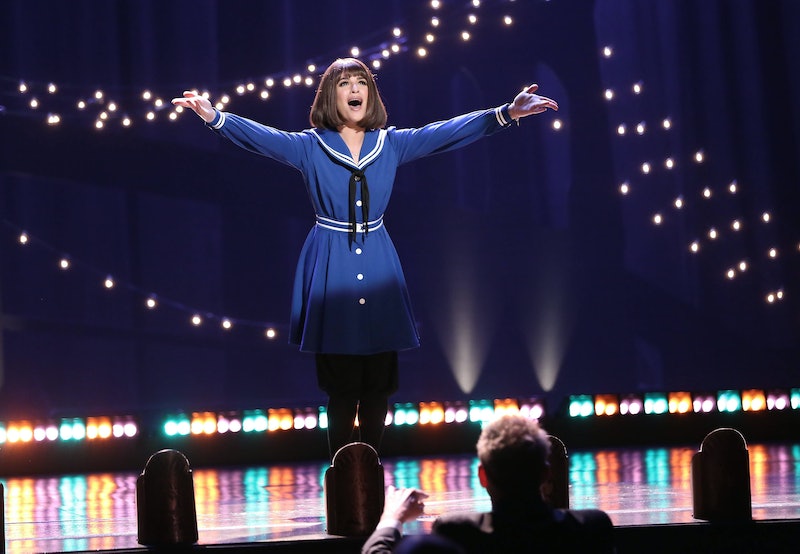 Rachel Berry is playing Fanny Brice in Funny Girl on Broadway — but in real life this time. In one of the most notable instances of life imitating art, Lea Michele made her debut as Fanny Brice in the Broadway production of Funny Girl on Sept. 6, emulating her Glee character Rachel, who also played the iconic role in a fictional Broadway revival on the series. Michele replaced Beanie Feldstein, who departed the production on short notice in July, two months earlier than expected, resulting in one of Broadway’s biggest casting scandals in recent memory.

While Feldstein’s tumultuous exit amid underwhelming critics’ reviews has fans divided, Michele landing the role she calls “a dream come true” is a total triumph for Gleeks, who have been waiting to see the actor play Fanny on Broadway for nearly a decade. Originally, Glee creator Ryan Murphy obtained the rights to Funny Girl and intended on reviving the musical on Broadway with Michele in the lead role after the show’s 2015 finale, but plans fell apart when his stage rights expired.

Now, seven years later, Michele’s Funny Girl dreams are coming true, making it the perfect time to revisit Rachel Berry’s Fanny Brice era on Glee. These are six things I noticed rewatching the Funny Girl episodes of Glee for the first time since they originally aired, from striking similarities to the real-life actors to a surprising casting option that went over all of our heads.

1. Rachel Had To Actually Work For The Role

Given how many songs from Funny Girl that Rachel sang on Glee before a Funny Girl production was even happening, including her Regionals showstopper “Don’t Rain On My Parade,” it’s easy to forget that the Broadway revival wasn’t specifically crafted for Rachel Berry. In fact, she was basically rejected at her first chemistry read for being too young and inexperienced to play Fanny, which, in typical Glee fashion, meant that Rachel had to prove her talent with an impromptu Beatles musical number. Hey, it worked.

As Rachel overhears the producers talking about what a casting risk she would be, one of them asks if they ever heard back from Claire Danes’ team, signifying that they had already offered her the role of Fanny Brice and making me ask lots of questions. Does Claire Danes have musical theater experience? Can Claire Danes even sing? Did they actually ask her to play Fanny’s mother? It would be very Hollywood of them to age her up and offer her a role she’s too young to play.

3. Santana Auditioned For Rachel’s Understudy Before Rachel Was Even Cast

When Rachel had to turn her run-in with the Funny Girl producers at the Spotlight Diner into a last-ditch effort to prove her talent, Santana didn’t hesitate to jump in on her rendition of The Beatles’ “A Hard Day’s Night,” proving her vocal talents before those producers even knew who she was. Later in the season, Santana would go on to be cast as Rachel’s understudy in Funny Girl, much to the fury of Rachel. Clearly, she was playing the long game in sabotaging her frenemy.

4. Sue Left A Musical That Jane Lynch Would Later Star In

Perhaps the most notable moment of Rachel’s debut performance of “I’m the Greatest Star” was when Sue Sylvester left her seat and went on to have a one-night stand. Ironically, eight years later, Jane Lynch would star in the same musical that her character was so disgusted by, portraying the mother of Fanny Brice, who was played by Rachel on the show, and now, Michele on Broadway. Sadly, the Glee co-stars will not be reuniting onstage, but just the thought of Lynch stepping onto that stage would repulse Sue and make her lash out in unimaginable ways.

5. Why Does Broadway’s Funny Girl Set Look Like A High School Production?

If Euphoria’s high school could somehow afford a revolving stage and many impeccably designed set pieces for Lexi’s autobiographical play, then the Broadway production of Funny Girl can pay for more than a ladder, some string lights, and a stack of bricks that was probably taken from an alleyway behind St. James’ Theatre. The set design was what a high school production should look like, and while Rachel Berry needs nothing to shine, her vocals still deserved a better backdrop.

6. Rachel’s Jump From Broadway To TV Was Very Similar To Lea Michele’s Journey

Only a month into her Broadway run, Rachel received a major opportunity to have a screenwriter fly to New York and craft a new TV pilot around her, a scenario that’s actually very similar to how the real-life actor ended up on Glee. Michele was starring in the first Broadway production of Spring Awakening when she had her first meeting with Murphy, who went on to craft the character of Rachel specifically for her. At this meeting, Michele shared her love for Barbra Streisand in Funny Girl, which she had only recently discovered, and naturally, it was incorporated into her character from the beginning.

Basically, Michele’s Glee storyline proves that her tenure in Funny Girl on Broadway has always been written in the stars — even if it happened years later than expected.

More like this
The First Trailer For 'That '90s Show' Includes So Many Nods To The Original Series
By Jack Irvin, Alyssa Lapid and Grace Wehniainen
A Major 'Call The Midwife' Character’s Future Is In Question
By El Hunt
Kim Cattrall Had A 'Sex And The City' Reunion With Creator Darren Star
By Grace Wehniainen
17 Photos Of The 'Wednesday' Cast Vs. The 1991 'Addams Family' Cast
By Grace Wehniainen
Get Even More From Bustle — Sign Up For The Newsletter