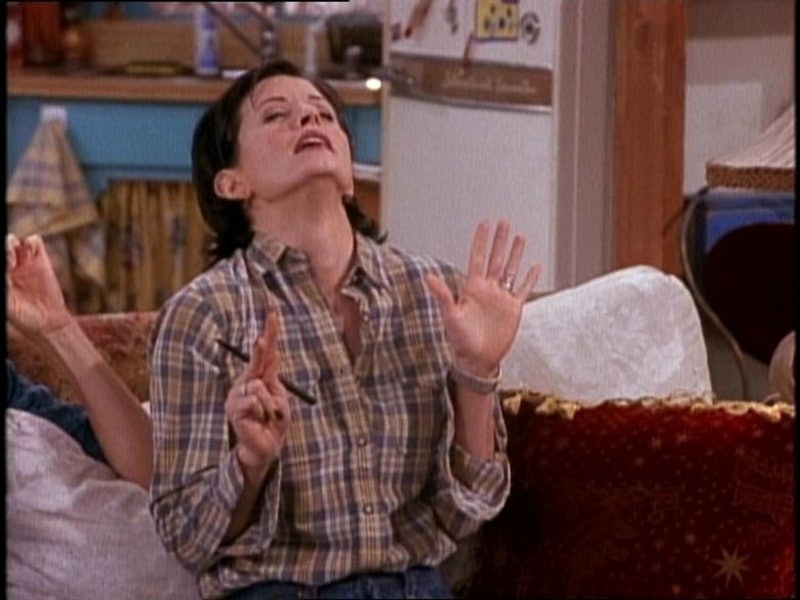 There's an iconic episode of Friends in which Monica explains to Chandler that there are seven female erogenous zones. Each zone has a corresponding number, and she maps out different combinations (a-one-two-three!) that could potentially lead to pleasure. Then she launches into a euphoric, "Seven, seven, seven!" resulting in thunderous studio audience laughter and applause, and leaving viewers enviously wondering what exactly these seven erogenous zones for women and people with vulvas are and how we can experience them, too.

For those unaware of what Monica was even referring to in that feverish outburst, erogenous zones are areas on our bodies and skin that have heightened sensitivity to arousal. And just as it’s pleasurable to have your own erogenous zones stimulated, it’s also thought that looking at or touching a partner’s erogenous zones can be just as much of a turn-on, according to a 2020 study in the Archives of Sexual Behavior.

Though Friends has long past its decade-old anniversary and even a reunion, the questions raised in Monica’s passion-fueled scene seem worthy of revisiting. Because if legendary pop culture does anything, it can actually teach us something worthwhile about ourselves — including about our sexual health (re: Sex Education on Netflix). Let’s take a look back at Monica’s tutorial and what we can learn from it.

As it turns out, Monica was giving viewers a low-key truthful entry-level crash course with her seven erogenous zones chart — albeit just the tip (pun intended). According to sex educator Lola Jean, seven is a spot-on number to start with, at least.

“There are thought to be seven main erogenous zones, or primary erogenous zones, but there can [also] be secondary and tertiary,” Jean explains to Bustle. “The main ones would be the lips, the neck, the ear lobes, the chest/breast or nipple area, the inner thighs, the butt, and then the genitals.”

These seven primary erogenous zones certainly aren’t the end-all-be-all, but they do happen to be the most common ones for women and people with vulvas. However, even these main erogenous zones don’t do it for everyone, Jean explains. “The chest and nipples, that's a primary erogenous zone, [but] for some people it does absolutely nothing,” she says. “It very much will depend or vary person to person.”

While there are erogenous hotspots, studies show that the whole body is sensitive to arousing touches. This is where the so-called secondary and tertiary zones come in: the erogenous zones that aren’t included in the big seven Monica was talking about, but are valid nonetheless. Areas that turn you on when touched could be anything from the armpits and the feet to behind the knees and triceps — depending on who you are, different areas will do it for you.

Take, for example, the scalp. “Anyone who has ever received a head massage can tell you how pleasurable they can be," Caleb Backe, a health and wellness expert for Maple Holistics, previously told Bustle. “The scalp is covered in nerve endings, making it one of the most sensitive parts of the body. Targeting this erogenous zone is a great way to get things going ... as it increases blood flow and releases serotonin and dopamine.” Keeping a head massager in your bedside table doesn’t sound like a bad idea at all.

Finding Your Own Erogenous Zones

Discovering your personal erogenous zones can help you feel more in tune with ways to make yourself feel good and express to a sexual partner how they can best pleasure you. As Jean explains, opening ourselves to new physical and emotional responses from touch, regardless of if we’re into the core seven or otherwise, can be a positive and fun form of exploration.

“I think it's really important to discover not just the basic erogenous zones, but the ones that are not as common, because this puts a lot less pressure on the areas that we feel like we need to experience pleasure,” Jean says. “And it also opens us up to new sensations, or ways where we can be able to not just experience arousal, but have [a] fun experience — pleasure doesn't have to lead to arousal.”

Start with what Jean refers to as a sensation inventory: Use the whole body as a canvas to start exploring, and see how you respond. An expert in the topic, Jean even teaches sensation play classes to help people explore new ways of feeling. She recommends starting with your fingertips and then moving along to other forms of touch. Begin by engaging with different types of safe sensations in order to figure out your erogenous zones. As you progress, try to be mindful about what and how you are feeling.

There can be light touch, which is very surface-level and on the tip of the skin, or harder, more intense touch. “We can use our mouths, we can apply suction and also different materials,” Jean says. “So, I could have a feather. I could have a stick. I could use cold metal. I could use hot wax. I could use my breath. There are all these different types of sensations.”

Referring to a similar exercise that she calls body mapping, author and intimacy coach Kristin Casey recommends that it be done with another person. “It's done by taking turns with your partner (so that one person is actively touching the other, who remains passive until it's their turn) to stimulate their body from head to toe, in a way that's mindful, deliberate, and comprehensive,” Casey previously told Bustle. Although, truth be told, exploring on your own body is just as good of an option and gives you a chance to be open and intimate with yourself and your body.

As a note on exploring different types of touch, Jean adds that we should understand that our bodies will be receptive to different sensations based on many different factors. “It’s not only based on our state of arousal, [but also] if we go into something cold, versus we're already a little bit warmed up,” Jean says. “Also just life changes, temperature changes, [and] menstrual cycle changes can totally affect both our level of sensitivity and also what we're receptive to.”

Even if you already know some of your own erogenous zones, opening up to the possibility of finding more can be fun. “Finding a new erogenous zone is like finding a new fetish — it’s a new way where you can experience fun, you can experience pleasure, or just an area that you know you can enjoy, especially if it's not one of the main parts that we tend to use for different types of sex,” Jean says.

If Monica Geller can teach us something useful and accurate about our bodies and sexual health, then there certainly are plenty of things left to learn and discover. Finding your own unique erogenous zones might be just one of them.

More like this
Here’s Why Danny Masterson’s Hyde Isn’t In 'That '90s Show'
By Brad Witter
Man Meets Politics: ‘Boy Meets World’ Star Ben Savage Is Running For Congress
By Jake Viswanath
'Friends' Star Maggie Wheeler Offers Support To Matthew Perry After Reading His Memoir
By Alyssa Lapid
'That '90s Show' Star Callie Haverda Got Advice From Mila Kunis & Ashton Kutcher
By Brad Witter
Get Even More From Bustle — Sign Up For The Newsletter
From hair trends to relationship advice, our daily newsletter has everything you need to sound like a person who’s on TikTok, even if you aren’t.

This article was originally published on May 5, 2014