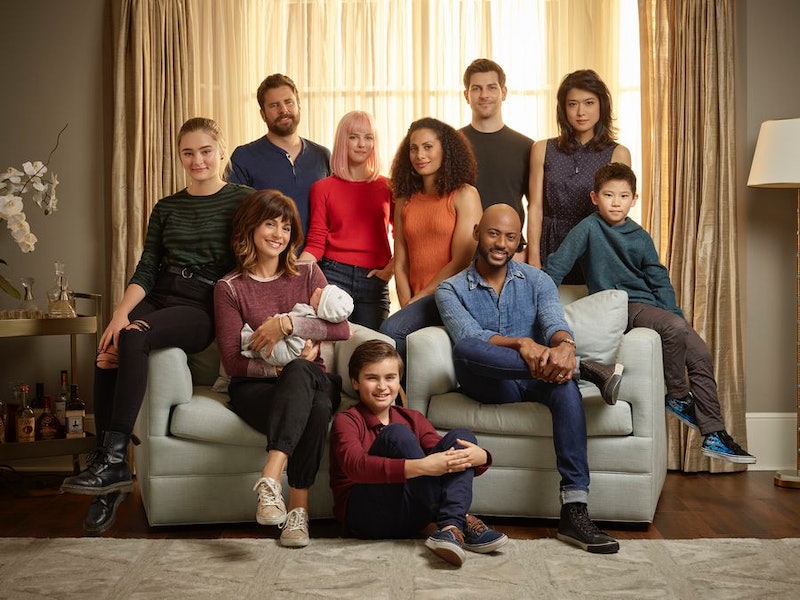 Between new relationships, spilled secrets, and even a potentially huge character death, a lot happened in A Million Little Things Season 2. But it's been several months since the show wrapped, and over a year since Season 2 premiered. So given all the IRL chaos that's unfolded since then, you may need a refresher before diving into Season 3. Let's recap.

PJ Was A Thing

You probably forgot about Barbara Morgan's son PJ, because he wasn't in Season 2 beyond the ninth episode. As a refresher: Barbara Morgan is Jon's friend from college and was dating their mutual friend Dave until his death in the Sept. 11, 2001 terror attacks. Jon blamed himself for Dave's death, because he had invited Dave on a trip but then missed the fateful flight, leaving Dave to die alone.

PJ is Dave's son, but Barbara lied and told him his dad is her now-husband Mitch. PJ finds Jon's video message for Barbara apologizing to her about Dave, but PJ doesn't have any context and assumes Jon is his dad. He even does a DNA test with hair from Jon's sweater that seemingly confirms his suspicions. But the sweater was Dave's, so the DNA match is just proof that Dave is PJ's dad. Barbara confirms this to PJ after learning about his search for the truth. Distraught over his parents' lie, PJ almost attempts suicide, but is talked down by Rome. After that, PJ's parents decide to take him to see a specialist recommended by Maggie, and that's the last we see of PJ.

Delilah & Eddie Have A Baby

Delilah and Eddie's affair is over, but that doesn't change that they share a daughter: Charlie. Determined to not have any more lies between him and his wife, Katherine, Eddie confesses the truth. Katherine is initially so upset that she storms out, but she eventually comes home and even occasionally offers to watch the baby.

Delilah, meanwhile, is insistent that her children, Danny and Sophie, never know that Eddie is Charlie's real father because she doesn't want them to hate her for cheating on their late dad. But when the rest of the friend group sees what not knowing the truth about his parents does to PJ, Delilah agrees to tell Danny and Sophie as well as Eddie's son Theo. Sophie does hate her for a little while and even moves in with Rome and Regina for a period of time. But Sophie starts to understand her mother more when her grandfather reveals that Delilah and Jon didn't always have a happy marriage. Danny wasn't as upset about everything as his sister, mostly because he was distracted with getting his first kiss from his boyfriend Elliot and then Elliot suddenly moving away, leaving Danny heartbroken.

Eddie and Katherine Get New Jobs and Fix Their Marriage

Katherine and Eddie decide that while they can't ever go back to how they were, they can find a new path together. They also have to come together to parent Theo, who is having a hard time dealing with all the changes in his life. They help him go to therapy and work through his concerns that Eddie may cheat again with Dakota, the young musician he's started working with on an album. Dakota struggles with substance misuse, which Eddie may be able to help her with given his past issues with alcohol dependency. He also tells Theo about his sobriety, fully committing to his no more secrets thing.

Katherine, meanwhile quits her law firm after realizing that they're pulling her off cases just because her assistant is gay. She decides to start her own firm, and Regina and Delilah give her office space above their restaurant so she can get started.

By the end of the season, Eddie and Katherine have decided to renew their vows to prove their recommitment to each other.

Maggie and Gary Break Up

Now that Maggie is cancer free and on the mend, she starts to realize that she doesn't know how to be with Gary without their relationship being all about her cancer. The cracks start to form early in the season, but they're broken wide open by a guy named Eric (played by Jason Ritter), who has Maggie's brother Chad's donor heart. Maggie's mom wrote him a letter and, after learning he also lives in the Boston area, comes to visit both him and Maggie.

Maggie is totally weirded out that her mother has become friends with the man who has Chad's heart, but Eric wins Maggie over bit by bit. He lost his fiancée in a motorcycle accident, and bonding with Maggie and her mom helps his grieving process too. As Maggie and Eric grow closer, Gary becomes suspicious. He and Maggie eventually break up after she finds an engagement ring at his house and realizes he's moving faster than she's ready for. Maggie enlists Eric to help her move back into her old apartment and Gary finds solace with several different women as he heads down a self-destructive path that even briefly lands him in jail for getting into a fight.

To resolve some of his own trauma, Gary visits his mother who left him as a child. She's an actress now and still far more interested in her career than in her son. He doesn't necessarily get the warm reunion he wanted, but he realizes that it wasn't his fault she left, which gives him a sense of peace. It comes just in time for him to strike up a new relationship with Katherine's friend Darcy, the mother of one of Theo's classmates.

Eric Isn't Who He Says He Is

Maggie's romance with Eric comes to an abrupt halt when she sees a photo of him without a scar on his chest — a scar that would be there if he really had a heart transplant. Eric then reveals that it wasn't him who got Chad's heart, but his now deceased fiancé. He didn't have the courage to tell Maggie or her mom what actually happened. Understandably upset, Maggie storms out and calls Delilah, who passes the news on to Gary. He goes to comfort Maggie, who asks him out to dinner, but he says they should just be friends — an idea they both toy with for the next several episodes. Sometimes Maggie is ready to get back together, sometimes Gary is, but never at the same time.

Maggie finally confesses her feelings for Gary right before leaving for a fellowship in England, but he tells her it's too late. He's with Darcy now and he wants to see how that plays out. Right before Maggie's plane leaves, he meets her at the airport to apologize and says he still wants to be friends — even though they both clearly want more than that and just can't get on the same page.

Now that her husband is dead and she's no longer seeing Eddie, Delilah decides to start dating a little bit. She goes on a date with Andrew, an investor in her restaurant, thinking they can connect over the fact that they're both widows. But she learns that Andrew's wife is still alive, she's just in a coma. Later in the season, Delilah meets a hot, young EMT named Miles and hits it off with him.

Though Regina thought she didn't want to have a child, she changes her mind and agrees to adopt one with Rome. They find a woman named Eve who's due to go into labor really soon, but there's one complication: her ex Derek doesn't know she's pregnant. He was abusive, and Eve is on the run from him. It isn't long before Derek finds her, and a terrified Eve agrees to go with him in an effort to get him to willingly sign his parental rights away. She's successful in that task and drops a hint that she'll be in the bathroom long enough for Regina to rescue her. Regina makes sure Eve gets to a safe house and sets up a restraining order, while Rome scares Derek off for good.

When Eve goes into labor, Regina and Rome are excited to name their new baby boy Jon. But Eve changes her mind and decides to raise the child on her own. Rome and Regina are crushed. In the midst of their adoption journey, Rome also loses his mother and decides to produce his autobiographical movie about his mental health struggle.

Lindsay, who has also struggled with alcohol dependency, is newly sober and ready to be part of her brother's life again. But she unintentionally sets Eddie on a downward spiral when she brings up their childhood lake house. It's where they used to party when they were younger and where their friend Alex drowned. Once she reminds Eddie about the lake house, he has a dream about drinking on a boat with Jon, who then falls into the water. Eddie tries to help Jon back into the boat, but Jon's hand changes to a girl's hand reaching out from underwater.

Soon Lindsay tells him the truth that he's either repressed or was too drunk to remember: on the night Alex drowned, Lindsay found Eddie unconscious and soaking wet on the beach. Eddie was clearly more involved in Alex's drowning than he remembers. He tries calling Alex's sister for information, but she doesn't want to talk to him.

Eddie and Lindsay go back to the beach house to see if it triggers anything for Eddie. They're approached by Alex's dad, who yells at them to go away and leave his family alone — especially "after everything [Eddie's] done." Eddie is confused and desperate to figure out what happened. He returns again to the lake house, this time without Lindsay, and finds his clothes from that fateful night hidden under the house. Alex's bracelet is in the pocket and he suddenly remembers trying to save her but being unable to pull her back into the boat. He now thinks he's the reason for Alex's death. He goes to a bar to drown his sorrows, but sees an older drunk man and realizes he doesn't want that to be his future. He leaves the bar and calls Katherine to tell her he's on his way to the wedding.

Eddie Gets Hit By A Car

The big cliffhanger of the season is that Eddie steps into the road and is hit by a car. We don't know if he survives, but we'll find out soon enough. Season 3 premieres Nov. 19 on ABC at 10 p.m. ET.

More like this
The ‘You’ Season 4 First Look Shows Joe’s New Identity And Potential Victims
By Bustle Editors
The ‘Emily In Paris’ Season 3 Release Date Is Here, Plus The First Footage
By Bustle Staff
Here's When 'The Crown' Season 5 Will Premiere — And What To Expect
By Bustle Editors
'Killing Eve' & 'Doctor Who' Stars Just Joined The Cast Of 'True Detective' Season 4
By Brad Witter
Get Even More From Bustle — Sign Up For The Newsletter