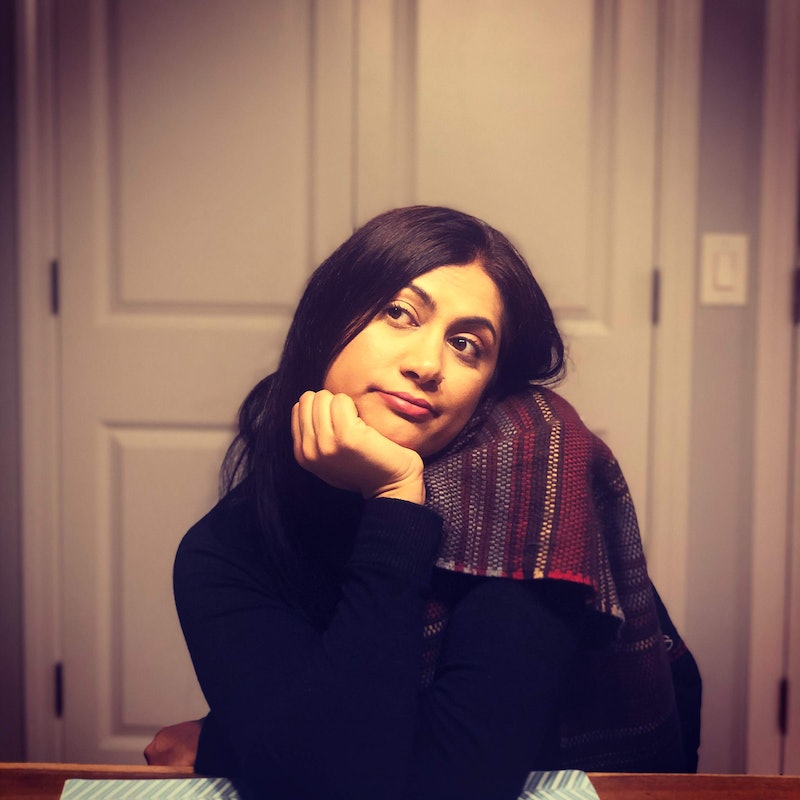 Five years after she debuted with An Ember in the Ashes, Sabaa Tahir is finally bringing her beloved story to a close. A Sky Beyond the Storm finishes the story Tahir began in her 2015 bestseller, but the journey has been much longer for author herself. "I began writing Ember 13 years ago," she tells Bustle. "I have spent more than a decade of my life writing, breathing, laughing, mourning and celebrating with my characters. They are a part of me, as familiar to me as my hands or my face. So when I wrote the final words on the final page of the final book, I felt as though I was saying farewell to my best friends, to a piece of me."

An Ember in the Ashes launched at a time when multi-doorstopper YA fantasy series — think Victoria Aveyard's Red Queen and Sarah J. Maas' A Court of Thorns and Roses — were at their height. But as an #OwnVoices novel, written by a Pakistani American woman and starring multiple characters of color, Ember was unlike most of its peers. It was the first in a long line of YA fantasy novels from South Asian and Muslim authors, hitting store shelves ahead of Roshani Chokshi's The Star-Touched Queen, Swati Teerdhala's The Tiger at Midnight, and Hafsah Faizal's We Hunt the Flame.

But according to Tahir, there's still much work to be done to diversify YA publishing. "Over and over, authors from marginalized groups are told, 'We already have a book like this,' or 'We already have an author like you.' But books by marginalized authors shouldn’t be a quota you fill," she says. "How many vampire books written by white authors? Dozens. I’ve nothing against that, but authors from marginalized groups deserve the same respect. Just because authors have similar experiences or ethnic backgrounds doesn’t mean their stories will be identical. We contain multitudes and our work is meaningful and distinctive."

While Tahir doesn't have any immediate plans to return the Ember series after A Sky Beyond the Storm, she'll continue writing and pushing representation in publishing forward. "All I can say for sure is that I want to do something different with my writing," she says of her next project. "Maybe explore some darker terrain."

But before you start longing for Tahir's next work, read on for an excerpt from the hotly anticipated A Sky Beyond the Storm.

Excerpt from A Sky Beyond the Storm, exclusive to Bustle

I awoke in the glow of a young world, when man knew of hunting but not tilling, of stone but not steel. It smelled of rain and earth and life. It smelled of hope.

The voice that spoke was laden with millennia beyond my ken. The voice of a father, a mother. A creator and a destroyer. The voice of Mauth, who is Death himself.

Arise, child of flame. Arise, for thy home awaits thee.

My name drags me out of the past to a rain-swept hilltop in the Mariner countryside. My old home is the Waiting Place — known to humans as the Forest of Dusk. I will make my new home upon the bones of my foes.

“Meherya.” Umber’s sun-bright eyes are the vermillion of ancient anger. “We await your orders.” She grips a glaive in her left hand, its blade white with heat.

“Have the ghuls reported in yet?”

Umber’s lip curls. “They scoured Delphinium. Antium. Even the Waiting Place,” she says. “They could not find the girl. Neither she nor the Blood Shrike has been seen for weeks.”

“Have the ghuls seek out Darin of Serra in Marinn,” I say. “He forges weapons in the port city of Adisa. Eventually, they will reunite.”

Umber inclines her head and we regard the village below us, a hodgepodge of stone homes that can withstand fire, adorned with wooden shingles that cannot. Though it is mostly identical to other hamlets we’ve destroyed, it has one distinction. It is the last settlement in our campaign. Our parting volley in Marinn before I send the Martials south to join the rest of Keris Veturia’s army.

“The humans are ready to attack, Meherya.” Umber’s glow reddens, her disgust of our Martial allies palpable.

“Give the order,” I tell her. Behind me, one by one, my kin transform from shadow to flame, lighting the cold sky.

A warning bell tolls in the village. The watchman has seen us, and bellows in panic. The front gates — hastily erected after attacks on neighboring communities — swing closed as lamps flare and shouts tinge the night air with terror.

“Seal the exits,” I tell Umber. “Leave the children to carry the tale. Maro.” I turn to a wisp of a jinn, his narrow shoulders belying the power within. “Are you strong enough for what you must do?”

Maro nods. He and the others pour past me, five rivers of fire, like those that spew from young mountains in the south. The jinn blast through the gates, leaving them smoking.

A half legion of Martials follow, and when the village is well aflame and my kin withdraw, the soldiers begin their butchery. The screams of the living fade quickly. Those of the dead echo for longer.

After the village is naught but ashes, Umber finds me. Like the other jinn, she now glows with only the barest flicker.

“The winds are fair,” I tell her. “You will reach home swiftly.”

“We wish to remain with you, Meherya,” she says. “We are strong.”

For a millennium, I believed that vengeance and wrath were my lot. Never would I witness the beauty of my kind moving through the world. Never would I feel the warmth of their flame.

But time and tenacity allowed me to reconstitute the Star — the weapon the Augurs used to imprison my people. The same weapon I used to set them free. Now the strongest of my kin gather near. And though it has been months since I destroyed the trees imprisoning them, my skin still trills at their presence.

“Go,” I order them gently. “For I will need you in the coming days.”

After they leave, I walk the cobbled streets of the village, sniffing for signs of life. Umber lost her children, her parents, and her lover in our long-ago war with the humans. Her rage has made her thorough.

A gust of wind carries me to the south wall of the village. The air tells of the violence wrought here. But there is another scent too.

A hiss escapes me. The smell is human, but layered with a fey sheen. The girl’s face rises in my mind. Laia of Serra. Her essence feels like this.

But why would she lurk in a Mariner village?

I consider donning my human skin, but decide against it. It is an arduous task, not undertaken without good reason. Instead I draw my cloak close against the rain and trace the scent to a hut tucked beside a tottering wall.

The ghuls trailing my ankles yip in excitement. They feed off pain, and the village is rife with it. I nudge them away and enter the hut alone.

The inside is lit by a tribal lamp and a merry fire, over which a pan of charred skillet bread smokes. Pink winter roses sit atop the dresser and a cup of well water sweats on the table.

Whoever was here left only moments ago.

Or rather, she wants it to look that way.

I steel myself, for a jinn’s love is no fickle thing. Laia of Serra has hooks in my heart yet. The pile of blankets at the foot of the bed disintegrates to ashes at my touch. Hidden beneath and shaking with terror is a child who is very obviously not Laia of Serra.

Not in his mien, for where Laia of Serra has sorrow coiled about her heart, this boy is gripped by fear. Where Laia’s soul is hardened by suffering, this boy is soft, his joy untrammeled until now. He’s a Mariner child, no more than twelve.

But it is what’s deep within that harkens to Laia. An unknowable dark­ness in his mind. His black eyes meet mine, and he holds up his hands.

“B-begone!” Perhaps he meant for it to be a shout. But his voice rasps, nails digging into wood. When I go to snap his neck, he holds his hands out again, and an unseen force nudges me back a few inches.

His power is wild and unsettlingly familiar. I wonder if it is jinn magic, but while jinn-human pairings occurred, no children can come of them.

“Begone, foul creature!” Emboldened by my retreat, the boy throws something at me. It has all the sting of rose petals. Salt.

My curiosity fades. Whatever lives within the child feels fey, so I reach for the scythe slung across my back. Before he understands what is happening, I draw the weapon across his throat and turn away, my mind already moving on.

The boy speaks, stopping me dead. His voice booms with the finality of a jinn spewing prophecy. But the words are garbled, a story told through water and rock.

“The seed that slumbered wakes, the fruit of its flowering consecrated within the body of man. And thus is thy doom begotten, Beloved, and with it the breaking — the — breaking —”

A jinn would have completed the prophecy, but the boy is only human, his body a frail vessel. Blood pours from the wound in his neck and he collapses, dead.

“What in the skies are you?” I speak to the darkness within the child, but it has fled, and taken the answer to my question with it.