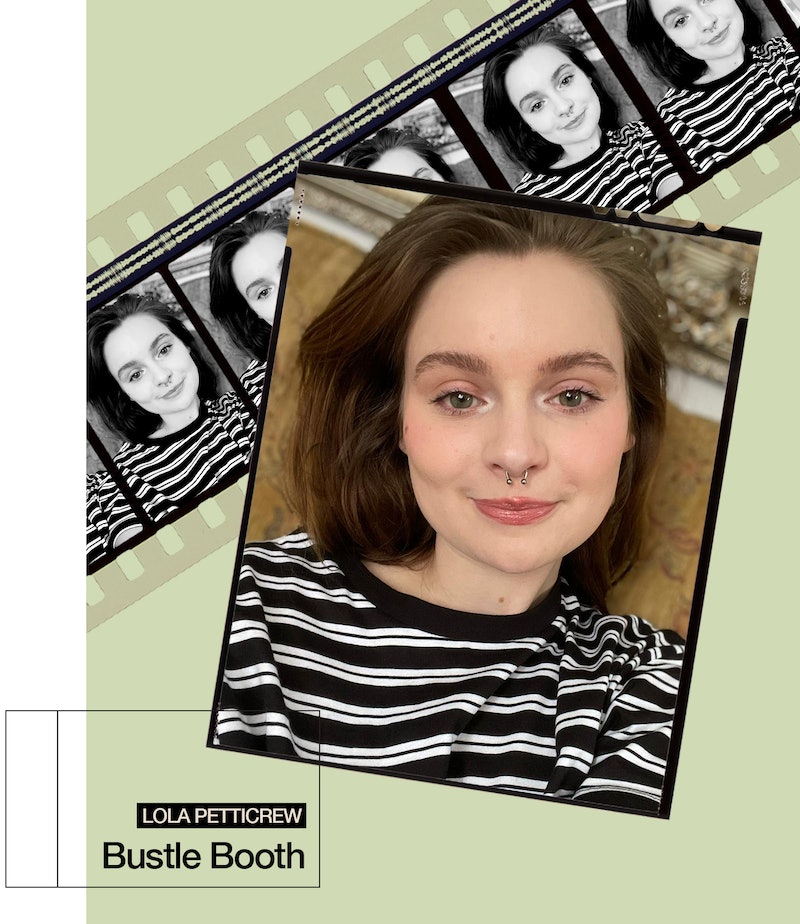 Lola Petticrew cannot sit still. Physically she is capable of it, but the rising star literally hasn’t stopped in the past two years. “I’m very lucky to have been working,” she tells me modestly, Zooming in from the front room of her family home in Belfast. In the background, Pettigrew’s graduation picture auspiciously smiles down, while we chat about recent acting roles, new pandemic hobbies (“vegan baking, carrot cake is my specialty”), and her latest TV viewing (The Morning Show).

First, let’s rewind to October 2019. Petticrew burst onto the international scene with A Bump Along The Way, an independent Irish film about a forty-something single mother, played by Bronagh Gallagher, who becomes pregnant after a one-night-stand. Petticrew plays her rather prim, and desperately mortified teenage daughter. Together, they come to terms with, and navigate the situation with humour and more than a few tears.

Following that breakout performance, Petticrew took on the lead role in Dating Amber in June 2020, starring opposite Normal People’s Fionn O’Shea. A hilarious and heartwarming comedy about friendship and self-acceptance, Dating Amber tells the tale of two queer teenagers desperate to fit in. Changing gear again, come January 2021, Petticrew was at the heart of a cold case investigation, playing James Nesbitt’s daughter in the BBC drama Bloodlands.

Currently, she’s starring in BBC’s Three Families, a devastating two-part series set in Northern Ireland, tracking the true stories of three women affected by abortion laws. And next up, she’ll be donning a corset as Jane Seymour, opposite Jodie Turner-Smith in Channel 5’s Anne Boleyn. What should we expect? Well, Petticrew says, it’s “unlike any period drama that people are used to.”

If that doesn’t sound busy enough – she’s also recently wrapped on Nathalie Biancheri’s upcoming film Wolf, which stars George MacKay and Lily-Rose Depp. Petticrew’s excitement is palpable, even via video call, sharing that she’s always loved storytelling: “From when I was really young, me and my friend had a little suit case of dress-up stuff, and we would go to different classrooms, and put on little performances.”

She adds: “I was always interested in acting, but I remember watching This Is England ’86, and looking at Vicky McClure, and thinking: ‘I want to do that.’”

Taking on complex and emotive subjects ranging from sexuality to abortion, Petticrew is mindful of her mental health. “For me it is about separating home life and work life,” she says. “It’s about having a strong support system, and being able to shake the day off – a cup of tea always helps me. And remembering that you're a living, breathing person, trying to get through life.” Ultimately though, she wants the work to speak for itself, particularly with Three Families: “Behind all of the statistics, and the rhetoric, it's just real people.”

It is a happy coincidence that so many of the acting gigs have been set in Northern Ireland. “Whenever I’m away from home for a really long time I get really homesick for the people,” Petticrew says. “I love Belfast, I think there are no people like them in the world.” In terms of who she’d like to work with next, it is her friends she lists: Fionn O’Shea, India Mullen, Danielle Galligan, Toni O'Rourke. “The wealth of talent coming out of Ireland at the minute is really exciting,” she says enthusiastically. “If I got to work with my pals I’d be absolutely delighted.”

While Petticrew’s next role is firmly under wraps – “but I can say I’m really really excited about it” – you can get to know a little more about the actor below.

Capricorn, but I honestly feel like I am ruled by my Pisces moon.

The Grim Adventures of Billy & Mandy.

Succession. I reference it every day.

I asked my friend Stuart which show he would put me in and he said: “The Circle, because you don’t actually have to interact with anyone.”

“It’s All Coming Back To Me Now” by Céline Dion.

At the moment, we are seeing the bravery of Elliot Page, his openness is inspirational. What they are doing for transgender youth is invaluable.

More like this
Twitter Is Burning As Phoebe Dynevor Reveals Daphne’s 'Bridgerton' Exit
By Sophie McEvoy
Helena Bonham Carter Doesn't Think 'The Crown' “Should Carry On"
By Sam Ramsden
'Abbott Elementary' Fans Probably Missed This 'Parent Trap' Easter Egg
By Sam Ramsden
Everything To Know About The 'Daisy Jones & The Six' TV Series
By Maxine Harrison and Brad Witter
Get The Very Best Of Bustle/UK
Sign up for Bustle UK's twice-weekly newsletter, featuring the latest must-watch TV, moving personal stories, and expert advice on the hottest viral buys.