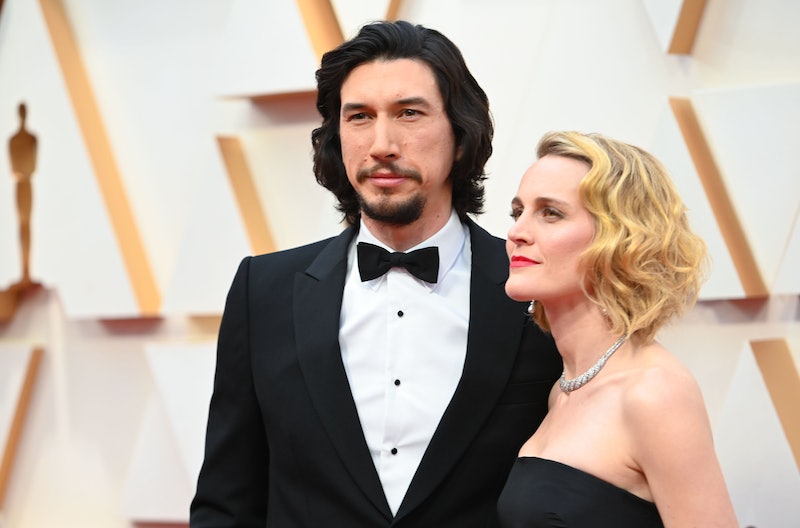 Adam Driver’s latest movie White Noise is a dark comedy that features an “Airborne Toxic Event,” that requires his fictitious family to evacuate. His past few roles have been packed with high stakes as well. In October 2021, the 39-year-old actor starred as squire Jacques Le Gris in The Last Duel, a historical drama based on a true story about medieval France’s last trial by combat. In November that year, Driver starred in House of Gucci as Maurizio Gucci, the heir to the famous fashion house. In the film, his power-hungry ex-wife, Patrizia Reggiani (played by Lady Gaga), arranges his assassination in a desperate attempt to remain an integral part of the Gucci legacy.

Luckily, the Star Wars star’s real-life relationship is nowhere near as dramatic. Driver has been married to fellow actor Joanne Tucker for about nine years now, and the couple even worked together on the 2019 political thriller The Report. Tucker is also known for her role in the 2020 comedy Give or Take, and she was featured on American Rust, which wrapped its first season in 2021.

Although Driver and Tucker’s professional lives are very much in the spotlight, the Hollywood couple seems to prefer keeping their relationship to themselves. But still, fans have questions: Where did they meet? When did they get engaged? Do they have any children together? What are they up to since lockdown?

Here’s the couple’s complete relationship timeline that started sometime in the mid-2000s.

After serving in the Marines for two years and breaking his sternum in a mountain biking accident, another accident happened: Driver became an actor. After his injury, he attended Juilliard, a competitive performing arts conservatory that offers degrees in dance, music, and drama. While it remains unclear what year they met, the two were classmates who bonded over cheese.

“She taught me what Gouda cheese is,” Driver confessed to Broadway.com in 2009. In the same interview, the Annette actor revealed that Tucker helped him adjust to life in New York City after previously living in Indiana. As it turns out, he learned about a lot more than dairy products from his now-wife. For example, “you shouldn’t talk with your mouth full and spit on the sidewalk.” Both are valuable lessons if you ask us.

2006: They Co-Founded An Organization

After meeting at Juilliard, Driver and Tucker founded Arts in the Armed Forces together in 2006, which is an organization that “honors and enriches the lives of the US military community by offering powerful shared experiences in theater and film.” In a 2015 interview with The Guardian, the actor said that AITAF brings “entertainment to an audience that wouldn’t normally be associated with theater,” and said that the reactions have been positive. According to Harper’s Bazaar, Tucker also serves as the organization’s artistic director.

Driver and Tucker tied the knot in a secret ceremony in 2013. At the time, Us Weekly reported that the couple “got married over the weekend of June 22” and that they had a destination wedding. To this day, where they exchanged their vows remains a mystery. What we do know, however, is that they love each other very much. “They’ve been dating forever — years — and live together,” the magazine’s insider said after their nuptials. “They’re very comfortable and in love. She was with him before the Girls fame. They both love theater and the arts.”

If it wasn’t clear that Driver and Tucker like to keep their personal life private, the couple kept their son a secret for years. According to Harper’s Bazaar, the pair apparently welcomed a son in 2016. However, it wasn’t until the following year that the Girls actor hinted at being a parent. “I look at my dog — this sounds so absurd — but it’s not — I don’t know if I can love anything more,” he told W magazine. “Like, I have a kid, maybe — and be like, ya know, but the dog!”

In 2018, Page Six reported that Driver and Tucker had a “2-year-old son” and that “family members have posted about Tucker’s pregnancy on their private Instagram feeds.” But it wasn’t until 2019 that Driver officially confirmed that he was a father in an interview with The New Yorker, where he revealed that keeping his son a secret was akin to a “military operation.”

“My job is to be a spy — to be in public and live life and have experience,” he told the magazine at the time. “But, when you feel like you’re the focus, it’s really hard to do that.”

While hosting Saturday Night Live, he spoke about his son again: “I’m a husband and a father. It’s in that order though. I’ve been very clear with my son about that. He’s second to everything.”

The couple’s collective theater backgrounds came in handy. Driver and Tucker met with White Noise director Noah Baumbach and his partner Greta Gerwig (who also stars in the movie) to read an early version of the script aloud together, according to The New York Times. “Twenty pages in, it all clicked,” he said of the team effort in a 2022 article.

More like this
Hilary Duff's Husband Matthew Koma Has Her Name Tattooed On His Butt
By Jake Viswanath and Stephanie Downs
Paris Hilton & Carter Reum’s Relationship Timeline Includes A Surprise Baby Boy
By Bustle Editors
Keke Palmer Shares The Sex Of Her & Darius Jackson's Baby
By Jake Viswanath
Channing Tatum Calls Walking Away From Relationship With Jenna Dewan “Terrifying”
By Radhika Menon
Get Even More From Bustle — Sign Up For The Newsletter
From hair trends to relationship advice, our daily newsletter has everything you need to sound like a person who’s on TikTok, even if you aren’t.

This article was originally published on Dec. 9, 2021