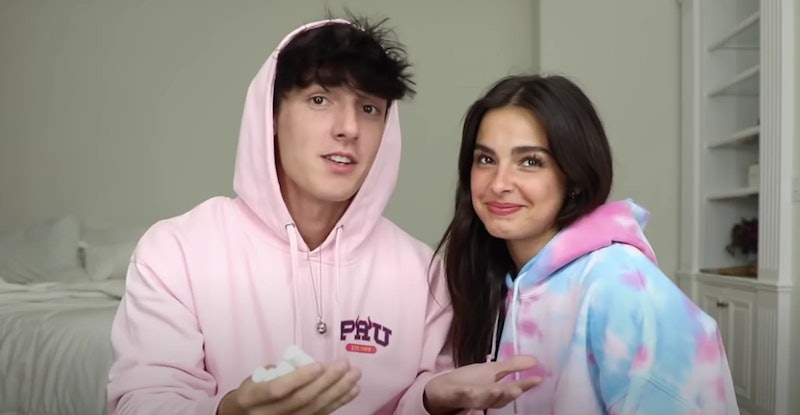 Sorry, Braddison shippers, but your favorite TikTok couple may have called it quits. Rumors that Bryce Hall cheated on Addison Rae began swirling last month after the former Sway House member went to Las Vegas with a group of influencers. And now, Rae is doing some damage control by asking her followers to respect that some things need to be handled privately.

"I love y'all and am always so grateful for the kind words and support you show me," the 20-year-old influencer wrote on her Instagram Stories on Wednesday, March 3. "Sharing my life with y'all makes me happy, but some things I choose to handle offline. When and if I want to share, I will make that decision. Thank you again for all the love and support. Hate is never the answer."

According to Cosmopolitan, the rumors first began when incriminating text messages started circulating online from adult film star Dana Wolfe. Then, this past weekend, Rae tweeted and deleted some very cryptic messages. "Disappointed but not surprised," she wrote. "Figures," another tweet read. Bryce, for his part, took to Twitter on March 1 to deny the infidelity allegations altogether. "I didn't cheat on addison," he wrote simply.

In addition to his tweet, Hall recently confirmed to a paparazzi that everything was good between him and Rae. "Everything's fine," he said. "I don't know why everybody overreacts but until we do our own thing or say anything — I don't know, I feel like everyone's overreacting about stupid sh*t."

The 21-year-old internet personality wasn't the only one to deny the allegations. Samantha Salvador (aka Saiviantha), an influencer he was rumored to have cheated with, revealed exactly what went down in Vegas in a video that was reshared by the TikTokRoom Instagram account. "There was nothing that happened that I constituted as disloyal at all," she said, explaining that her encounter with Hall was a "business, networking type of thing" and nothing more.

Salvador also noted that Hall was on FaceTime with Rae most of the night and even "serenaded her with the piano." "I definitely never even got close to Bryce in that way," she added, doubling down on her position that nothing happened between them. "He has a girlfriend. He's in a happy relationship and we respect relationships out here."

Bustle has reached out to Hall and Rae's reps for comment and will update this story once we hear back.

More like this
Adam Levine Denies Having An Affair — But Admits He “Crossed The Line”
By Jake Viswanath and Radhika Menon
The Try Guys Cheating Scandal, Explained
By Grace Wehniainen
Adam Devine Hilariously Let Everyone Know He’s *Not* Accused Cheater Adam Levine
By Brad Witter
Hailey Bieber Just Responded To *That* Viral Met Gala Moment
By Radhika Menon and Sam Ramsden
Get Even More From Bustle — Sign Up For The Newsletter