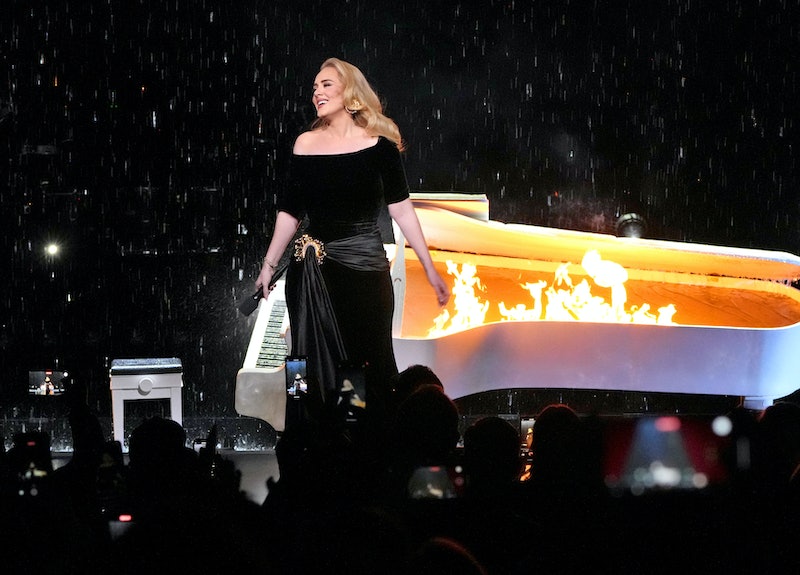 Adele fans who’ve belted out “Easy On Me” and pored over its heartbreaking lyrics know that the ballad from her 30 album is a snapshot of the singer’s divorce from ex-husband Simon Konecki. After seven years together, the pair originally split in 2019 and divorced two years later — a time that the singer previously called “turbulent.” Over the weekend, Adele revealed even more details about that period — including how it drove her to her therapist several times a day.

During one of her “Weekends with Adele” Las Vegas residency concerts at the Caesars Palace, the 15-time Grammy winner told audiences that she’s been seeing a therapist again. “I started having therapy again because I went a few years without. I needed to start,” she said in between sets on Saturday, Dec. 10. She then shared just how frequent her sessions used to be, especially during her separation from the entrepreneur-philanthropist. “Before, obviously, when I was going through my divorce, I was basically doing five therapy sessions a day,” she added with a laugh.

“I stopped holding myself accountable for my own behavior and the things I would say,” she continued, before explaining that her reason for seeking professional help now is completely different. “But now I am doing it because I just want to make sure I'm topping myself up every week to make sure I can give you everything.”

The “Hello” singer even gave concert-goers a preview of what happened in her last session. “My whole therapy session this week was really interesting. It was about these shows,” she began. “I always get so emotional. I love making music, but there is something about performing live that actually terrifies me and fills me with dread.”

“That is why I am not a big touring artist. I did it last time to prove I could do it,” Adele said, though she was also quick to add, “But this experience of being in a room this size, I think I might be a live artist for the rest of my life.” Her revelation, captured by a fan, was reposted on Twitter with the caption “@adele you’re our therapy.”

Though the singer can now make light of her challenging divorce to live audiences, she’s previously made clear just how painful the period was for her. Prior to her album launch in November of 2021, Adele previously alluded to its contents — as well as the “turbulent period” that spurred it — in an Instagram post. In a teaser photo for 30 in October 2021, Adele wrote, “I rely on routine and consistency to feel safe, I always have. And yet there I was knowingly — willingly even, throwing myself into a maze of absolute mess and inner turmoil.” She even alluded to the period as her “Saturn Return,” which the astrologically-savvy know to imply a rocky cosmic shakeup.

The 34-year-old had also previously opened up about her separation in her November 2021 British Vogue cover interview, as well as how she hoped the album would help explain the divorce to her and Konecki’s 10-year-old son, Angelo, amid the guilt she felt for causing him to be “unhappy sometimes.”

“I just felt like I wanted to explain to him, through this record, when he’s in his twenties or thirties, who I am and why I voluntarily chose to dismantle his entire life in the pursuit of my own happiness,” she told the outlet, adding, “It made him really unhappy sometimes. And that’s a real wound for me that I don’t know if I’ll ever be able to heal.”

Thankfully, these days, she’s happy when it comes to matters of the heart. She’s been in a relationship with sports agent Rich Paul for over a year. (Some fans even believe they secretly wed at some point). Adele even dished on her stable relationship with Paul to Vogue in November 2021. She told the outlet, “I don’t feel anxious or nervous or frazzled. It’s quite the opposite. It’s wild.”

More like this
Meghan Trainor & Daryl Sabara Are Expecting Their Second Baby
By Jake Viswanath
Adam Levine & Behati Prinsloo Welcome Their Third Child Together
By Jake Viswanath
Hilary Duff's Husband Matthew Koma Has Her Name Tattooed On His Butt
By Jake Viswanath and Stephanie Downs
5 Wild Theories About Miley Cyrus’ “Flowers” Music Video
By Jake Viswanath
Get Even More From Bustle — Sign Up For The Newsletter
From hair trends to relationship advice, our daily newsletter has everything you need to sound like a person who’s on TikTok, even if you aren’t.